In yesterday’s blog, I talked to comedy critic Kate Copstick about a fundraiser for her charity Mama Biashara.

The back of the Mama Biashara shop in London has a performance space. It has been used for comedy shows and, monthly, is the venue for the comedy industry’s Grouchy Club.

Recently, Copstick was approached by Alfie Noakes of the We Are Funny project to stage an event titled Is Radical Feminism Killing Comedy? which had been scheduled at another venue but that venue cancelled the show because of objections by what Copstick yesterday called ‘The Ladies of the Left’… ‘The Sisters’.

“They objected I suppose,” she said, “to the mere idea that anyone might even debate let alone think such a transgressive idea…”

COPSTICK: Somehow they persuaded the owners of the venue to refuse to put it on. The gig was shot down in flames by, I assume, the radical feminists about whom it was going to be debated. 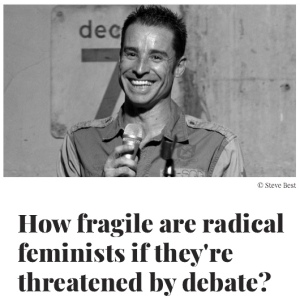 Alfie Noakes defended himself in a Chortle.co.uk article

The ‘feminist sisterhood’, generally speaking, are smart, smart, smart women. They are some of the smartest women on the circuit. So I don’t see what they have to be afraid of in allowing other people – who are arguably considerably less smart than them – just to voice differing opinions. If you ARE going to sit on other people’s opinions like that, then where do you stop?

I am a person of strong opinions myself, but I would be up for anyone challenging or debating my strong opinions and saying: “Your strong opinions are rubbish!” We are ostensively living in a free state. We don’t have a Bill of Rights but it’s kind of a given that we have the right of free speech.

JOHN: Within the law.

JOHN: Although the British legal system is not the same as justice.

COPSTICK: Anyway, Alfie contacted me and I said: “This is dreadful… Free speech… Free speech… Blah blah blah…” and I said: “Look, if you need a space, you can have the space at the back of Mama Biashara. It’s not ideal but, if content is king, then have my throne room.

So he came down, saw the space and was obviously crushingly disappointed and I was knocked-back – not for the first time – and now the gig is going elsewhere – The Star of Kings at King’s Cross next Tuesday. It’s no longer called Is Radical Feminism Killing Comedy? It’s now called the Feminist Talking Points Comedy Show Fundraiser with Janet Bettesworth, Nathan Cassidy, Samantha Ruth Pressdee, Tony Marese and other people. But it is still kind of debating censorship and comedy with a variety of opinion.

JOHN: When it was going held at the back of the shop, all the money was going to be donated to Mama Biashara, wasn’t it? 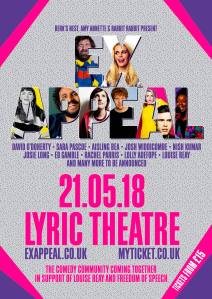 COPSTICK: Yes. Half of it still is. The other half is going to Index on Censorship.

JOHN: Censorship is a hot topic at the moment. There’s the Louise Reay gig…

COPSTICK: Yes. With comics coming together to cover some of her legal costs, which is lovely.

But all censorship is basically the same thing. With Louise, it’s her husband saying she wasn’t allowed to say various things that he claims she said during her show. I saw the show and can’t remember anything horrible being said about her husband.

JOHN: And what do we think about the dog giving the Hitler salute?

JOHN: The owner of the dog was found guilty in a Scottish court. I think he supposedly put the video on YouTube to amuse his girlfriend and for some reason left it online.

COPSTICK: He was found guilty and he could go to prison.

JOHN: I’m not quite sure what the crime is. There is a law in Scotland, isn’t there, which bans sectarian singing in football matches?

COPSTICK: But that IS an incitement to hatred.

JOHN: You were trained in Scottish law and you worked as a lawyer in Scotland…

COPSTICK: But this specific thing. Teaching a pug dog a Nazi salute. Surely it’s making fun of the Nazi salute? I can’t believe that, if Hitler and Goebbels are looking up from the Hell where they obviously are, that they are going: “Oh vot a marvellous idea! Ziss is ver good! Vy did ve not think of zis in ze Second World Var? If vee had had small pug dogs doing the Nazi salute, perhaps ve would have vun der Var!”

JOHN: It could be said to be defamation of the dog’s character.

COPSTICK: There are terrible things happening. There are hate crimes abounding. There are people beating up people from immigrant communities. All of that we should be getting angry about. We should all be focussing on getting these people behind bars. Not being outraged by a small cuddly animal making a Nazi salute.

JOHN: It’s a case of over-reaction.

COPSTICK: Yeah. To my horror… I nearly choked on my own tonsils… There is a female MP who is bringing forward a bill to make wolf-whistling ‘hate speech’. And my reaction is: “Fuck off, you stupid, blinkered woman!”. But, on the basis of free speech, she has got a perfect right to do that just as I should have a perfect right to say: “What the actual fuck are you thinking about?”

A wolf-whistle is a compliment. It’s not necessarily the kind of compliment everyone would want, though I would be THRILLED if anyone wolf-whistled at me now.

Something appalling like eight people have been stabbed in London in the past two weeks. There are horrendous things happening: domestic violence. Awful, awful things. Female genital mutilation is happening in THIS country and, really, why waste the possible power you have as an MP to try and criminalise wolf-whistling? And don’t witter on about “it’s part of a continuum.” It is not part of a continuum from wolf-whistling to a young girl being held down and having her nether regions sliced to bits. No. It is NOT a continuum.

JOHN: Getting back to the Nazis – always a good subject – pug dogs have got little legs. They surely can’t do a proper Nazi salute. They can only do one of those little flappy-hand half-hearted salutes that Hitler himself did.

JOHN: Hitler? He was a brownshirt-lifter. We will get complaints.

COPSTICK: We’ve been very jolly about it, John, but it’s a serious subject.

Jonathan Pie made a YouTube video about the Nazi-saluting dog…