Why has comedian Akin Omobitan started a podcast called IT DIES HERE? 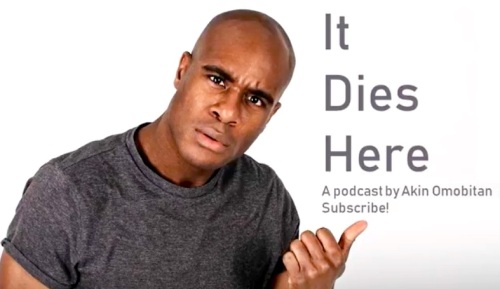 JOHN: So you have started a podcast. Why not do a blog? – Or is that too old-fashioned?

AKIN: I did do a blog back in the day and someone did once call me a blogger and I really didn’t know how to take that.

JOHN: Are you sure it was a blogger he called you?

AKIN: Yes. You have a blog. How do you describe yourself?

AKIN: I used to blog back in 2004. I had wanted to do a podcast for ages but never had an idea I thought would be ‘for people’.

JOHN: And now you have. Why is it called It Dies Here?

AKIN: It is pretty much a celebration of idiocy, calamity, regret, stupidity, misfortune, mishaps. So, each week, I have a different guest and they bring a story, a situation or an event which plays in circles in their head because, in hindsight, they now know how they could have handled it differently and better. So, instead of it living in their head, they bring it to the podcast and it can die. 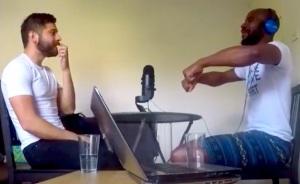 A couple of people have said: “Oh wow! This is like therapy!“

AKIN: A couple of people have come on and said: Oh wow! This is like therapy! but none of them has agreed to pay for my services yet.

JOHN: Do you have a couch to lie on?

AKIN: I do. But, if I invited people to my home to lie on a couch, it might just lead to misinterpretations.

AKIN: Well, since releasing the trailer and putting Episodes 1 and 2 online, people have got in touch with me asking to be on the podcast.

AKIN: No. Because of the time it takes. And because I think it’s good for the listener to get the full conversation.

JOHN: Are the guests all comedians?

AKIN: No. Coming up, we have a couple of comedians, a financial journalist, a DJ and a TV presenter.

JOHN: Despite having co-hosted 101 Grouchy Club podcasts, I am not really a podcast listener. I have a feeling there’s something else I could do – like watch two-thirds of an old British comedy movie on TV.

AKIN: Or you could listen to a podcast and hear about the demise of an individual who started his own business, was offered millions for it and a job in Silicon Valley and all of that crumbled.

JOHN: But will it have knob gags? Anyway… where is this new weekly podcast leading? To a ‘proper’ broadcast radio show?

AKIN: I don’t know. It’s a different way of expressing yourself creatively. I used to write; that was one method. Doing stand-up comedy is another method. I MC shows as well; that’s different. And the podcast is such a different platform.

AKIN: With a lot of my stand-up, it is scripted. I may go off on tangents and play around a bit, but the majority of it is premeditated… When you are MCing, you can have a chat with the audience, but there are lots of different people and you are not really having a conversation with them; you are just trying to make the room fizz… When you do a podcast, you sit one-on-one with someone and have a good in-depth conversation for around 45 minutes.

JOHN: I find listening to what people say is over-rated. 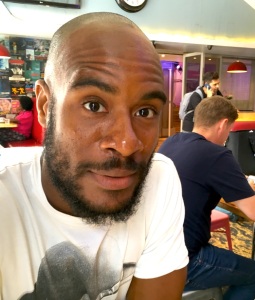 “…I had things which ran around in MY head…”

AKIN: Part of what inspired…

AKIN: Part of what inspired the podcast is that I had things which ran around in MY head much longer than they should have… You know when you are a teenager and you are just very broody and moody and miserable? And that can go from adolescence into adulthood. Break-ups, different careers, failures. I was fired from jobs on a number of occasions. There were lots of things I had to let go of and, in letting go of them, I realised that I myself was the main reason I was not happy.

When I realised that and took a bit more control of my own happiness, I became a happier, nicer person.

And, because I had this reference point of me being a moody, miserable, self-indulgent person, I never wanted to be that person again. It inspired me to drift away from that aspect of my personality and more towards embracing the good things of life.

JOHN: You are a Christian. Did you go through a period in your teens of not being a Christian?

AKIN: I wouldn’t describe myself as re-born. I think a big part of it, actually, is that, when you grow up in a Christian household, there are a lot of beliefs and belief systems which you adopt without really making a choice. I guess part of my ‘liberation’ was stepping away from a lot of things. 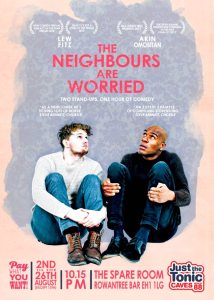 And then, one-by-one, I started re-connecting to all of these things, but under my terms. My relationship with my family is great, but I no longer feel the need to pander to my parents’ wishes for my life. I have tailored my friendship circles, so it is people who I genuinely want to be friends with, as opposed to people who I have just known for a long time.

Even with my Faith, I would say I am a lot more liberal in my views and outlooks. I guess there are different ideals and morals and stuff which I agree with. I just connect with things very differently. I guess there’s just a certain amount of freedom now.

JOHN: So you are more liberal in accepting other people’s ideas and beliefs?

AKIN: Definitely. I would always have described myself as liberal but I think, until you step away from your ideas then re-connect to them as you want, you are not really living your Truth.

So, as opposed to Oh! I just love everyone, man! I then started thinking Why do I believe that?

I guess a lot of my beliefs and ideologies now are bounded more in me personally, not just: Oh. Because I’m a Christian, this is why I love everyone… or Because I’m a black person, this is why I behave this way. I just separated myself from a lot of parts of my identity and found a way of re-connecting… Yeah…

AKIN: Maybe that sounds a bit hippyish and… Yeah…