In a Vancouver hospital, odd events, movies and talk of aliens wearing bras

They started and continued thus: 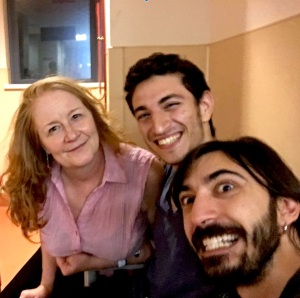 Anna, Ruggero and Daniel at St Paul’s A&E in Vancouver

I am in the waiting room of A&E at St Paul’s Hospital in Vancouver again.

I have been sitting beside two nice young men for two hours. They are both film students – one Italian, one Mexican. One of them had to get scans as he had an appendectomy two weeks ago and his innards were still settling so he is waiting for the scan results and getting blood tests.

It has been a very entertaining last several hours.

A and E is very busy. Though a window, I saw a catatonic Sikh man sitting on a chair, without a turban and his hair was a mess. Nearby, a hefty, good-looking drunk woman with bare legs sat howling angrily that she had been in every suburb of Vancouver in the last two days.

“You DON’T UNDERSTAND WHAT HAS HAPPENED to me!” she told people. “My boyfriend has LEFT me!”

The emergency waiting room is like a circus. The two students and I seem like we are the only ones not stoned or drunk.

One old man was amiably drinking beer after beer from cans. He announced he had some pot but not rolling papers. An old lady (who works as a safety officer on a building site) said she had papers, so they went out to smoke a joint and got stoned in the ambulance bay.

Meanwhile, a wiry little man with a grey Afro hairstyle went into the bathroom and, when he emerged, his pants were falling down. He ripped his shirt off and started roaring around the room stripping so they made him lie on a stretcher.

“Fuck Me!” he said in exasperation.

“Don’t talk to me like that!” a nurse told him.

“I wasn’t talking YOU,” he said angrily. “I was talking to MYSELF!”

I went for an MRI scan.The technician asked me to remove my bra and necklace. The necklace had a fiddly clasp and, because I was feeling shaky, I asked the young lady to undo it for me.

She asked: “Do you want me to help take your bra off too?”

“When did you do the stripping?” she asked.

“Did you ever do anything else?” she asked.

I should have pretended to be surprised and asked: “What else is there?” but I didn’t.

Anyhow, when I got back to the waiting room, the students were still there, I told them about the bra question and they cracked up.

We also spoke about film, art and the drug problem downtown.

The Italian – Ruggero Romano – is directing a feature documentary film about homeless people on the downtown east side – it depicts the controversial dynamics of the financially poorest and emotionally richest postal code in North America – V6A – There is a teaser trailer online.

The Mexican – Daniel Federico del Castillo Hernández – was a painter before turning to film.

Daniel del Castillo’s lively painting of his family in acrylic

He showed me a lively painting he had made of his family, with each of his  relatives portrayed as a different animal – a dog, a cat, a horse, a deer, etc. We were having so much fun watching the goings on. Ruggero was busy taking notes. He has joined a writers group. He said: “We should come here more often….”

A cute, paranoid lady with a skateboard and a British accent sat nearby, chatting on her phone.

The beer drinking man started demanding that the television channel be changed. When no-one responded, he stood on a chair and groped around the TV unsuccessfully. A security guard then realised the TV-groper had been drinking and told him to put away his beer. He refused, so he was told: “You aren’t allowed to drink in the hospital!” and he was escorted out.

Eventually (after 6 hours) a doctor came to explain that Daniel’s scans were OK so he could leave. 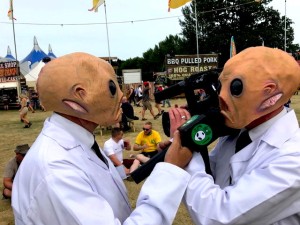 While waiting, I have found out that, in the UK, Ian Breslin and Mark Levermore of The Outbursts band were at the Isle of Wight Festival. Apparently they are still celebrating the release of Alien Bra, their latest album, which features a song about being abducted by aliens and forced to wear a bra.

I am still here, in acute care now, waiting for my CAT scan result.