Lynn Ruth Miller on dating a ROMEO, ageing and stripping in San Francisco 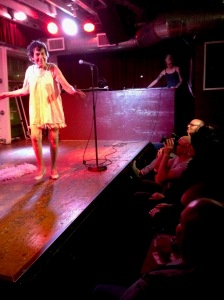 That is ‘dates’ in the gig sense and in the romantic sense.

This is what happened next in San Francisco…

I had a date with one of a series of very old men who seem to think it is safe to feed me since I am as ancient as they are.

The first one was a musician who has never played for money: a journalist who has never published anything after his stint at his high school newspaper 65 years ago.

I was amazed at the interest this gentleman took in life and his love of the life he is living even though he no longer drives.

He relies on public transportation in an area that has no concept of human need or time constrictions and he can only do one thing in a day.

He goes to a monthly meeting of a group of men called the ROMEOS (Retired Old Men Eating Out) and has been taking a jazz class for years at San Mateo college. He is filled with stories of days gone by and can take as long as an hour to answer any question since he ties it all in to his checkered and endless past, each incident told in a thousand words or more.

It is hard to believe, but I was with that man for three hours and said absolutely nothing. He couldn’t hear me anyway… just one example of my dating pool.

I have three more old men to go before this trip is over. I also have three or four YOUNG men who are treating me to meals and rides, all of them reminding me that I really didn’t miss the boat at all.

This afternoon I met my dear friend Ursula and heard about her husband and all his troubles. Ursula has broken the same wrist I broke back in 2014 and is in a splint. Her biggest worry is that they will put her in the hospital and she will not be able to care for her husband.

I realized, as I listened to this woman who is ten years younger than I, how lucky I am.

My problems are all psychological and work related. Death or loneliness are her two elephants and they follow her wherever she goes. Mine are my nasty personality and disgustingly aggressive drive to succeed. They are much more life sustaining.

Ursula is a wonderfully kind and industrious woman but plagued with the problems age brings.

Her husband is all but helpless. It is she who puts in his catheter, carries him to the toilet, feeds him and monitors his bowel movements.

And he does nothing for her but exist.

He is a brave man and does his best to take care of himself when he can but she is his full-time care-giver and nurse. She loves him and I know this is not a burden to her but still…

I had so wanted the life she had… and now I see the end result.

As I have said over and over, sometimes you are blessed when your dreams do not come true.

We drove by my old house and they have reversed the colors so it looks very California. It is now royal blue with white trim but it is still my house and my gorgeous garden. I realized as we passed it that that is now a closed chapter in my life. Beautiful while it was mine but mine no longer.

Alan Kahn picked me up and we went to Red Hot Burlesque. He is a young man (to me) whom I met when he was having a helluva time with his girlfriend, Amy.  Now he has a new one and she sounds lovely and stable. However, he is plagued with responsibilities and the need for life-changing decisions.

The gig was an hour show at The Stud, south of market in San Francisco.

It was a great little show where people threw money at the performers.

I got $30 for coming out in a towel and putting on my clothes… and was given a shot of whiskey which I could not drink because it sends me to the moon and back.

It was all glitter, gold and twirling tits – except for me, of course.

My tits lost their charm many years ago. I rely on humor to titillate and it evidently worked – probably because it was such a change from what everyone had been seeing on that stage.

Before and after the show, Alan and I talked about his problems. He has two children who will not leave home and I am always reminded of Dan Edwards’ comment that he could not get his children to leave, so he did. Maybe that is the answer for the parents of today.

Again, I was faced with what I have avoided.

Alan’s father died about three years ago after suffering several years with dementia and his mother died just a few months ago. He has two children who refuse to take responsibility for themselves and a sister who is the executor of his parent’s estate.

He is a creative, intelligent and very interesting man who is chained to obligations not of his making. He has so many dreams he wants to make happen but cannot bring himself to leave the security of a job he likes but does not love, because it gives him a pension and security and pays so very, very well.

It is a case of insisting on having the cake and eating it too and he has to come to grips with the eternal truth: If you want adventure and excitement, you have to give up stability and security.