Lynn Ruth Miller on why “Everyone hates the San Francisco police…” 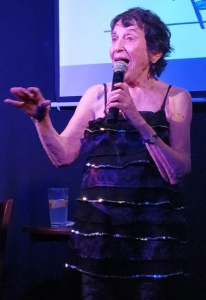 Last Friday, I performed at the Hubba Hubba Revue’s anniversary event. I sang I’ve Got Balls and Music, Music, Music and was carried off the stage by a gorilla. AND I got my fourth standing ovation.  All this praise and adulation just might go to my head.

After the show, I went out to dinner with Kari Jones who is an accomplished hula hoop-er and now she dances on roller skates while she hula-hoops. I can barely clap my hands without falling over; she is a physically coordinated genius.

But I am beginning to realize that my very existence and persistence is the key to all this admiration I have been getting from audiences. The one thing I want to remind myself over and over is that I am a hustler and I work for every gig I get, but I am not an exceptional talent.

I do not want to suddenly think I am hot stuff when I am only an old lady having more fun with life than I ever dreamed possible after my anxiety-fraught, miserably unhappy, first half of life.

On Saturday afternoon I had another date with Alan Kahn which was really lovely because he has been very kind and attentive to me since I have been here.

He drove me into San Francisco where I hunted around for a Starbucks or Peets to sit in until it was time for my gig at The Setup comedy club in the Tenderloin district of San Francisco.

Alan dropped me off at a Starbucks that had no place to sit so I asked a policeman if he knew of a café nearby.

“In the next block,” he said smiling happily at his partner and nodding to me.

So off I went trudging down Market Street looking for a Peets that was not there.

So much for believing the San Francisco police.

Finally, a young man in a cell phone shop drew me a diagram and sent me four blocks away to a lovely Peets where I could sit and ruminate about my set and take a bit of time to write some new material.

On the way there, I saw four police people on bicycles and I stopped to ask a young Asian police girl on a bike if this was a new thing since I could not recall seeing the police on bikes when I was here four years ago.

She was a delightful young lady and assured me that, yes, they do ride their bikes mostly because it is easier for them to get into a troubled area and get out and not seem as threatening or intrusive as when they are in a vehicle with sirens blaring, double parked and blocking traffic.

This young lady said she prefers a bicycle to being on her feet because, she explained: “They all hate us… You have to learn not to take it seriously… You should come to our station. We all just sit around laughing at the funny and abusive things people say to us. You have to have a sense of humor in this job.”

Well I certainly agree with her.

Everyone hates the San Francisco police because they shoot before they ask questions; they give citations when they are in the mood whether deserved or not; they are belligerent and angry even when you have not done anything wrong; and (like that first guy I met) they enjoy giving a pedestrian wrong information as a private joke.

Many of them are on drugs and alcohol and get off without sentencing because they are one of the boys.

It is good know they laugh among themselves. I have never seen one smile.

I told this young lady who looked as innocent and sweet as a teenager that the London police do not carry guns and she looked shocked. She could not imagine patrolling a street unarmed.

“They have Billy clubs in London,” I said to reassure her and off she pedaled to have a laugh-in at the local police station.

That was on Saturday.

On Sunday, it was my big art show.

After I left my home four years ago to fly cross the Atlantic Ocean and start a new life in the UK, Thad Gann salvaged 51 of my paintings. At that time, he said he was going to sell these paintings for me and make us both astronomical fortunes. But promises are only promises and dreams often have no substance at all.

He had the best of intentions but did not even bother to price the paintings or display them. He did, however, make a lovely Facebook page called The Art of Lynn Ruth Miller.

Part of the reason he did nothing to sell the art was that he was involved in  moving from the East Bay to San Jose. This is a city that lacks the glamour of the Bay area. It is at the south end of Silicon Valley and the homes are small and crowded together in contrast to the sprawling ranch homes further north and in Los Angeles. The city is hot in the summer and cold in the winter without the fog or ocean breezes to keep the temperatures stable.

We planned to have a huge art sale there on Sunday to get rid of these 51 pieces of questionable art but, because the city itself is so far away from the central areas and because no-one there really knows me the way they do further north, I had very few hopes of selling anything at all.

And, indeed, all of two people show up – although each bought a painting.

The rest of my 51 pictures will be donated to a rest home or children’s hospital to give the rooms a bit of color and to make me feel I have not painted in vain.

I do not paint for money. I paint to paint.

And now – back to London. 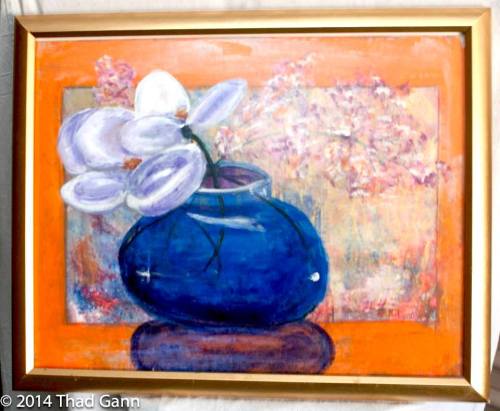