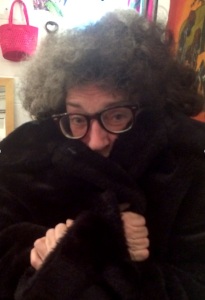 In the last couple of extracts from her diaries (HERE and HERE) mention was made of a penniless 14-year-old girl called Faith who was raped by her father, recently gave birth to his child and was being held in an overcrowded ward (2 to a bed) at Kenyatta National Hospital in Nairobi.

This is in clear contravention of last year’s Kenyan High Court ruling on detention of patients which states that it is illegal for a Kenyan hospital to detain a patient for non-payment of fees.

I am there the entire day. I am not one of life’s gifted ‘waiters’.

This is a place Kafka himself would struggle to create.

It is a big monster full of little monsters.

I go from little social worker to Head of Department, to Bill Management to Finance to Administration, back to Finance then back to Social Work.

We are in “just following orders” territory here.

But, in Kenyatta National Hospital, we get: “We are waiting for feedback”.

The buck is thrown around like a rugby ball in a grudge match and it is blindingly obvious that none of these people gives even the tiniest, the most transient, the least fuckity of fucks about a 14-year-old girl, raped and impregnated by her father who has now been held like a prisoner for over one month.

They see a bit of paper. And they see their nice quiet office. Some see nothing because they are simply too incompetent. Some worry because they see a mistake that they have made. All rush to point fingers in the direction of anyone else. None is bothered by the law of Kenya.

I am there six hours. Everyone is going home. I give up. Even David, who has been waiting outside, is practically catatonic with boredom and no one does nothing better than David.

I go and meet Mary of the Mary Faith Home. We have been in touch during the day.

She has just had a 12-year-old girl left with her who is so badly infected and damaged she cannot sit down. So far, they think, she has both syphilis and gonorrhea. Makes sense as she was being abused by both father and uncle over several years. Since she was five.

Mary leans forward and says, “She told me her uncle said to her: I know here at the front is for your father. But here at the back, this is mine.”

Latest update on 14-year-old Faith, currently going into her fifth week of incarceration at Kenyatta National Hospital. I have spent days in the place trying to get anywhere near an answer, let alone an explanation, much less a result. But today the CEO has sent a minion down from on high to take her file.

The excellent Standard newspaper printed a full page piece on illegal detention of patients in Kenya and hospitals yesterday.

Hopefully the continuing abuse of this poor girl will be ended sooner rather than later. I have never experienced anything like the working – and non-workings – of this place.

Now, apparently, it is because the Director of Corporate Services has failed to sign a bit of paper.

Apparently he is in a meeting.

Copstick takes no money of any kind for herself from the Mama Biashara charity and covers none of her own costs in running the charity nor for travelling to and from and living in Kenya.

Mama Biashara itself relies solely on donations and from sales of goods in its shop at Shepherds Bush, London. The website is HERE.