How illegal detentions of the poor are continuing in Kenyan hospitals… 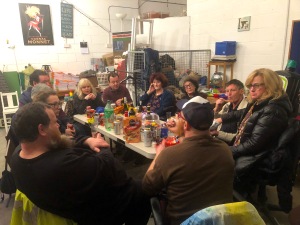 Last week’s meeting of the monthly Grouchy Club in London

But it also gets involved in other social problems it encounters.

During her most recent visit to Kenya, I posted extracts from Copstick’s diary.

When last posted, there was an unresolved story about a penniless 14-year-old girl called Faith who had been raped by her father, recently given birth to his child and was being illegally held in an overcrowded ward (2 to a bed) at Kenyatta National Hospital in Nairobi.

Copstick has now returned to the UK.

During last week’s meeting of Copstick’s Grouchy Club, held at Mama Biashara’s charity shop in London, I asked what had happened to Faith…

The administration block of Kenyatta National Hospital in Nairobi

COPSTICK: I spent many days in Kenyatta trying to organise her release. It’s horrific. Kafka could never write anything to compare.

A couple of days before I was leaving Kenya I thought we had done it and then we just lost grip. I had been about to go to the press…

JOHN: I thought you had already gone to the press.

COPSTICK: Well, the Standard ran an article. But I think that was just because they picked up on all the stuff I’d been venting and then what they had were stories of the same thing happening in other hospitals.

But Faith is out of Kenyatta now and so is the baby. We got the Children’s Services involved and they went to court and they got a court order for Faith to be released… Imagine having to get a court order to get a little girl out of hospital…!

I left Kenya on the Sunday. She was released with the court order on the Tuesday.

She’s out but, unfortunately, because she had been detained illegally in the hospital for so long, by the time she was released her newborn baby had got an infection. So the baby is not well and now Faith has developed an infection and they are too terrified to let her go back to Kenyatta in case it all starts again.

JOHN: Do they know what the infection is?

COPSTICK: Well, just one of those ghastly I’ve been kicking around in a hospital for too long infections.

JOHN: At least Mama Biashara got her out, though.

COPSTICK: She is out but now we… There is a new problem with a girl who was gang raped by three men. Everyone is too terrified to take her to Kenyatta Hospital, because it will just all be a nightmare. So she has gone to Nairobi Women’s Hospital. She is going to have to have a full hysterectomy because… well, when you are 11 years old and you are gang raped by three men double-teaming you, your insides end up pretty much mush.

That was about four weeks ago. And because there’s been no money, she’s just been there. She has to sleep on her front because there is too much pain and there is basically vast amounts of pus. There is no morphine; there is no anything. You might get paracetamol if you are lucky.

So she is now at Nairobi Women’s Hospital where they will do a full hysterectomy they’ve said… That will cost – by the time she has had the operation – probably £1,500.

JOHN: Presumably there is no equivalent to Britain’s National Health Service.

COPSTICK: There is no health service as such. There is a government hospital. But all they are really interested in is getting any money that they possibly can off of anyone. And nobody is prepared to take responsibility for anything at all ever.

What happens all the time in Kenya is that you go in, you have your operation or whatever you want and then they don’t let you out because you can’t pay your bill. And every day that you are kept in they charge you. So your bill goes up and up and up and up.

What happens is that you get people living rough in the grounds of the big hospitals. So when you go there, people are being kept within the hospital grounds. They live rough within the hospital grounds sometimes with their children. In places like Kenyatta, there is actually a small like a kindergarten school which has grown up because there are children who spend so much of their young lives there that they go to school there forever.

JOHN: And because they are living in the grounds, they have to pay more…?

COPSTICK:  They are charged for everything and they are detaining people because they can’t pay their bill, so the bill just keeps rising. It’s pretty-much standard. Private hospitals, government hospitals, everything hospitals.

Last year, a guy brought a case against Nairobi Women’s Hospital because his father had gone in, had an operation, couldn’t pay the bill and they were detaining him and the bill just escalated and escalated and it was a like a million shillings which is about £10,000. And the guy took the hospital to court saying that it was an infringement of his father’s rights. In the Kenyan constitution as well as some of the U.N. rulings, you have the right to ‘freedom of person’ – freedom of movement.

And he argued quite cleverly that detaining his father in the hospital was an infringement of his right to freedom of movement and freedom of person. And the judge agreed and this is massive –  humongous. It was all over the newspapers.

But it doesn’t make that much difference because, in Kenya, nobody tells the little people about any of these things so they didn’t get to know about any of that which is why the leaflets that Mama Biashara sends out – showing what their rights are – are so important. We give everybody the knowledge.

When I was in Kenyatta I said to one of the heads of one of the departments who don’t give a shit: “You know there is a High Court ruling…”

Kenya has a common law system because it’s based on the English legal system and that means that the last highest decision in a court is the law.

I said: “So in this case, this is the decision and this is now the law.”

And the woman turned around and said to me: “Not here.”

Inside some place like Kenyatta Hospital, they are just a law unto themselves.

Copstick takes no money of any kind for herself from the Mama Biashara charity and covers none of her own costs in running the charity nor for travelling to and from and living in Kenya.

Mama Biashara itself gets no official funding of any kind and relies solely on donations and from sales of goods in its shop at Shepherds Bush, London. The website is HERE.