Short horror films and an international festival – probably not for chickens…

Tonight, Sunday 17th March, BBC4 is screening a selection of short films in the UK under the umbrella title Born Digital: First Cuts.

I saw a preview of all the films earlier this week and Janitor of Lunacy by London-based Japanese director Umi Ishihara is well worth watching. What on earth it is about is another matter. It runs 12 minutes. 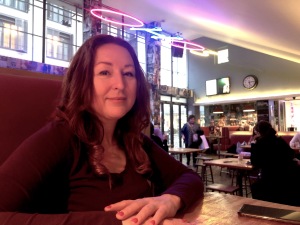 Amanda Fleming with halo at Soho Theatre Bar in London

AMANDA: Well, since I make short films and my direct theatre pieces tend to have a lot of horror.

JOHN: Why are you plugging other people’s films?

AMANDA: There are a lot of films that don’t get seen and a lot of film festivals that are particularly picky about how much money is spent on the film. I want to showcase talented up-and-coming film makers, so I thought it would be good to have a forum and to actually make a creative day of it.

It’s also a platform to meet some of the international people who have been entered into the festival – there will be Q&As.

We’ve had 75 submissions, 30 of them from abroad. Some of them were not the right genre of horror. Some were more psychological thriller rather than horror. Not quite the genre we were looking for. Maybe on the next one we will add in extra categories.

JOHN: There is a very nice dividing line between psychological thriller and horror.

AMANDA: We labelled it a ‘horror’ film festival. I was interested to see what came in.

JOHN: How do you decide something is a psychological thriller but not a real horror film?

AMANDA: Psychological tends be twists and turns – like somebody who thinks she’s hearing something and thinks it’s ghosts, but it’s just her own insanity or a stalker or whatever. The type of horror we were looking for was supernatural/Gothic, a little bit of zombie, a little bit of vampire.

JOHN: Val Lewton films in particular were all about the things you don’t see being more frightening than the things you do see. Were there films submitted that were on the borderline of your definition?

AMANDA: There was one. It won’t fit in this first festival but it was so good I am going to put in the next one. The festival is going to be twice a year. The first one is one day. Six hours. This first festival will be a small start-up one to see how it goes, then we will move to a slightly bigger venue in October or November this year.

JOHN: And this film which ‘doesn’t fit’ would be in the second festival in October or November?

AMANDA: Yes. I’m going to add an extra specific type of category so it will fit in.

AMANDA: Yes, so you know where it’s going to go, right?

JOHN: Why is it not horror?

AMANDA: Too funny. We are looking for more horror-horror. But I might even put it in this first festival as a token laugh moment. The trouble is we already have so many worth screening.

JOHN: They are all short films?

AMANDA: The films run between 2 minutes and 20 minutes.

JOHN: Two minutes is a scene, not a film.

AMANDA: But the 2-minute one is so good… to the point I have actually emailed them and said: I can see this becoming a major production. We are interested in talent and potential.

JOHN: You should have a Phlegming Award for Horror.

AMANDA: If we could afford it, we would, but we are just starting up. We are just awarding certificates for Best UK Film and Best International Film for this first one.

JOHN: And we will have to wait until October or November to see Fowl Fury…?

AMANDA: Probably… But, if we can fit the chicken one in this time, we will.