The unstoppable 85-year-old London-based US comedian Lynn Ruth Miller continues her travels. Last time it was Glasgow. Next time, it is New York. This time it was to perform for a week in Amsterdam… where she met a man from her past… Here she tells all… 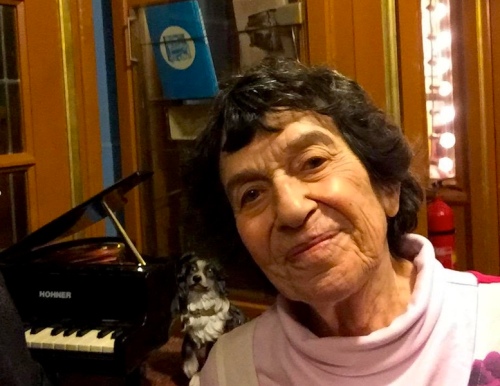 Amsterdam is a fun city and this trip was even more rollicking than ever.

The local food is execrable which makes it more amazing that all of the natives are tall, blonde and exceptionally healthy.  When I walk down the street dodging between the bikes, I feel like all of them are Snow Whites and I am the dwarf.

The typical foods are things like deep-fried meatballs with a mustard dip, gooey pancake sandwiches and thick greasy Dutch fries. The Dutch actually hunger for raw herring and deep-fried sweet dumplings. Their comfort food is stewed mashed potatoes, cabbage and kale topped with a fat greasy pork sausage. I cannot believe any of them have a waistline much less any teeth. Evidently their metabolism considers these delicacies to be the equivalent of sprouts on whole grain toast.

In addition, Dutch people are very reserved.  When they hear a joke they nod approvingly and say: “That is funny” (in Dutch of course). But they do not laugh. That type of uncontrolled reaction is reserved for the tourists.

As is getting stoned.

Dutch people do not do marijuana.

They are very smart business people. Pot is good money. Their motto is: “Let the tourists get high. We need to keep our wits about us so we can make a profit.” 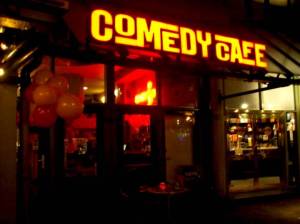 “It was a beautiful experience, but quite a challenge…”

On my first night in Amsterdam, I headlined at The Comedy Cafe. I have worked there before and it was a beautiful experience, but quite a challenge. The audiences were at least 70% native Dutch which means that English was their second language. They got the jokes all right, but they needed time to process the punch lines. This meant that I was two jokes ahead of them. I had to adjust my pace so they could absorb what I said.

It was a huge challenge and an exciting one because, when you succeed in making them get the humor, you have overcome a huge hurdle in your presentation. The last time I managed three times out of five and the truth is that it is those two failures that have haunted me ever since. I guess that is why I call comedy an art instead of a craft. You have to have that instinct that knows the pace, the emphasis and the time to pause for each individual audience.

I was very, very worried about this new performance because of the mixed reactions I got the last time, but this was a very different crowd. The show was run by Tim van’t Hul who has joined several other comedians to form a troupe called The Comedy Embassy. They put on English shows at comedy venues on their empty nights.

And the Comedy Cafe has become an all-English club. It was founded by Bob Maclaren who is a magnificent comedian. When I was there two years ago, he presented both English and Dutch language shows. Thursday night was his only all-English show. Now, Tim and his group fill in the extra nights with their own comedians. They are all young, upcoming performers and, although the quality varies, the enthusiasm is wonderful and the shows are always a delight.

Because all the shows are now in English, tourists make up most of the audience. On the first night, there was a group of about 20 men in the audience who were there on a training weekend to learn internet marketing techniques. They had evidently decided to take in some comedy after their dinner. They were from all over Europe, but most were from England.

When I saw them, I was terrified. My comedy makes fun of men and there were hardly any women in the audience. Those I saw were obviously on a date and were unlikely to encourage emasculating humor. It destroys any hope of a happy ending (so I am told, of course).

But I had forgotten that there is nothing the British like better than to excoriate themselves. The more you insult them, the more they love you. I think it is a male thing. You cannot get a British man to admit he has one good quality. To do that is in bad taste. And this self-flagellation seeps into the rest of their lives.

They celebrate the people who defeat them like Guy Fawkes. They gobble up fish and chips and complain that they have horrid teeth and bulging bellies. They do not know how to express disapproval. They shrug their shoulders and roll their eyes when you do something they think is gauche, like laugh out loud or rattle a newspaper. They are the prototype of up-tight. And this audience was very British.

I got on stage with the help of a pulley and a rope and discussed my views on male inadequacy, blaming men for the state of society and all my personal failures in life. I was greeted with thunderous applause so loud I actually heard it.

After the set. I went to the bar for a drink. A man named Kees van Amstel said: “I have something to show you.”

Naturally, my first reaction was to explain I wasn’t interested in seeing his, but then he bought me a drink and explained that, back in 2007, he was in Edinburgh at the Fringe, having a terrible time getting audiences for his comedy show. (And who among us cannot relate to that?)

He was terribly discouraged and ready to give up the whole project when a friend of his took him to see a late night show to take his mind off his troubles. I was in the line up for that late night show.

He said: “I watched you having so much fun up there on stage and I thought If that old woman (I was a young chick of 74 at the time) can have so much fun AT HER ADVANCED AGE and be that funny, why am I complaining about low attendance and huge monetary losses?  I have plenty of time to create my dream.

So, that night, he went back to his Edinburgh flat and wrote a blog (HERE it is, in Dutch) about the ancient hag who inspired him to continue has career and not give up too soon.

That incident was twelve years ago.

Now, he has his own shows and is on the board of directors of Toomler, the other major comedy club in Amsterdam. He decided to take a night out to see what the competition was doing. He did not know I was on the bill.

“When you got on that stage,” he told me, “I said to myself I KNOW that woman. And then I remembered that time so many years ago when you changed my life.”

When you are at the Edinburgh Fringe, slogging from one open mike to another, you never think that you are accomplishing anything more than getting a couple of bums on a few seats for the show you are doing. It certainly never occurs to you that someone might actually remember you twelve years after they hear you perform.

I cannot even remember something that happened twelve minutes ago much less twelve years ago. I assure you both my husbands instantly forgot everything I ever said within seconds of their departure from my life.

And here I was talking to a man who remembered everything I said twelve YEARS ago.

I have always believed that I do comedy because I love it and that is all the reward I really need. But that man gave me something far more valuable than 20 Oscars and 50 Nobel prizes. He made me feel that I was actually part of a bigger picture, one that tells the world they can do whatever they want to do if they just get out there and do it.