After yesterday’s blog, I got an email from a comedy performer I know. It read:

I am finally getting on with the job of writing my show after making reams of notes for months. Hopefully two months gives me enough time to write and learn it, though I intend the thing to be shaped up in Edinburgh more than here in isolation.

The Edinburgh Fringe is in August.

This was my advice to him, her or them.

Who knows what the correct PC form of address is any more?

Don’t repeat any of that to Kate Copstick, doyenne of Edinburgh Fringe comedy reviewers.

She gets annoyed at PRs or managers asking her not to review an act in the first few days of the Fringe because the performance needs time to ‘bed in’.

She says if the show isn’t perfect on Day One, it shouldn’t be brought to Edinburgh.

Edinburgh is not part of an ongoing process. It is the aim.

If you do one bad gig at the Fringe, the word may well get round and, if a reviewer is in that day, the review will be online for as long as your career survives (which may not be long if you perform half-prepared shows) and beyond.

In two – five – seven years time – it will say in print that you are a half-cocked performer – unreliable – or shit. Doing one bad Work in Progress gig to thirty people in a pub in Scunthorpe is arguably throwaway. Doing one bad gig to five people in Edinburgh could be a disaster because they will go home and badmouth you in totally different, widespread parts of the country.

And one or two or three of those unknown five punters in Edinburgh may well be reviewers or TV researchers or comedy bookers who will remember your half-prepared act forever.

If they are just ordinary punters, you are still up shit creek because you have an audience who are such comedy fans they came to the Fringe and now they will be badmouthing you to other comedy fans in Norwich or Plymouth or London or wherever.

The other bad news is you must never ever cancel any show in Edinburgh. If there is only one person in the audience, play full-throttle to that one person because they may change your life. If you perform a half-ready show, it may damage your prospects; if you cancel, it may destroy your prospects.

Charlie Chuck, unknown, at his first Edinburgh Fringe run was not getting audiences and was thinking of going home in mid-run. I advised him not to.

One night after that, he had an audience of only three.

Unknown to him, two of them were on the production team of a forthcoming, not-yet-made Reeves & Mortimer TV show. As a result, he became a regular on two of their series.

Once, when I was a TV researcher looking for acts, I turned up at a (free) show. I had seen the act before and it was interesting, but I had never seen them do a full show. I was the only punter to turn up. The act cancelled the show because, she said, “it won’t be worth you watching me with only you in the audience”. I would never ever risk using that act who has – inevitably – now faded away.

Edinburgh is not somewhere to hone an act. It is the real thing from Day One.

This morning, I checked with Copstick that it was OK to paraphrase her view in a blog. This is her reply and expanded view. 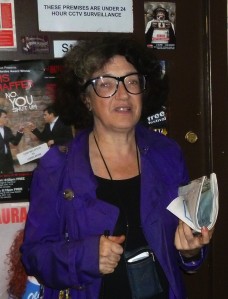 Ignore her opinion at your professional peril

I think if you are taking stand-up to Edinburgh you have no place mumbling about previews and looking for wriggle-room from audiences or critics on the basis that it is your first show of the run. You are a person in a space talking to other people in the same space. for money (either from ticket sales or from money in a bucket).

It is not Phantom of the Fucking Opera on Ice. If the mic fails, you talk a little louder. Spot fails, turn on the overheads. Sound spill – be funnier than the sound spill.

If you purport to be a professional and are happy to take money from people then – SPOILER ALERT – you will have many ‘first nights’.

It is up to you (as a professional which means you do it for money) that you learn to cope with the horror and terror of it all without making the audience feel that it is up to them to make sure it goes well.

First Night should just be a statement of fact, not a cover-all excuse.

And don’t get me started on ‘Work In Progress’ shows performed to 2,000 people at a time in the Edinburgh International Conference Centre for the same money for which you could see five comics who might do something that might surprise you. Even if it is not as polished as it might be on a first night.