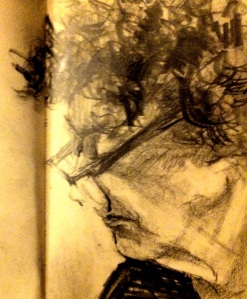 Following up on the last blog, here is an extract from last Friday’s diary kept by journalist/comedy critic Kate Copstick, working for her Mama Biashara charity in Kenya.

Mama Biashara helps people out of abject poverty by giving them small grants to start their own small, self-sustaining businesses.

Copstick receives no salary and no money to cover her own personal costs. She pays for her own overheads, flights and accommodation. 100% of all monies donated are spent on the charity’s work, which is run by volunteers.

Off back to Kajiado, pausing only to squeeze the very last out of the money Mama Biashara has to spend. The exchange rate has not improved.

We are checking on more businesses and then doing a funding. I am majorly stressed that the money will not last. And I have more than a week to go!

I have to send DECIP their monthly budget of about £180 (depending on exchange rate).

Vicky puts her people into bigger groups and points them at properly good businesses. So really these groups out here – the ones fleeing sexual abuse and tribal violence – are the best ‘Value For Money’ that Mama Biashara spends.

I do realise that terrified women fleeing unspeakable sexual violence to them and their children should not really be seen in terms of Value For Money but that, as they say, is how one rolls in a charity like Mama Biashara.

Our first stop is a construction site where one of our groups of young guys is building an entire compound. A big house and several smaller houses in a square. It is VERY smart. But the woman who has hired them is there and she does not want her place photographed unless we pay something. Also this group is one started by our fumigation men and most of the members are guys who have ‘been inside’. They are terrified that, if the police see that they are making money, then they will come and extort as much as they can. And they would. So no pictures. You will have to take my word for the quality of the work. It is excellent.

Next is a detergent business. These twelve ladies started in July with a grant of about £80 to sell soap powder and bar soap. Now the group (which has grown from 12 to 20) wholesales all manner of cleaning liquids which they mix themselves. They have big regular orders and also sell retail… some do deliveries, some do the mixing, one minds the store and some go looking for plastic bottles to pack the detergents and bleaches in. Their tiny hole in the wall might not look much but it is the heart of a big business now.

Mama B funds allows people to help themselves out of poverty

We visit to one of Mama Biashara’s greengrocers – a small collection of stalls selling tomatoes and greens, mangoes, butternut squash, fresh peas and a load more. This group is 15 strong and the ladies who are not here on the stall today are either chasing orders or out looking at farms with a view to new suppliers.

I also get a text from Jayne to say that the egg group we started with the quarry workers in Rongo (on Tuesday) with four trays of eggs to boil and sell, are now on ten trays. In three days. Not bad, as business expansion goes.

Now to the funding.

Four women and one man are in our little ‘safe’ house owned by a Mama Biashara businesswoman set up long ago. They all look half dead. I cluck exasperatedly and we get the bloke to go and buy sodas, bread and bananas. “I cannot discuss business with people who are sleeping,” I tetch.

Vicky leans over to me: “They are rape victims; be kind,” she murmurs. To be fair they have travelled – as tends to be the way with these groups – for miles to get here.

The guy’s group is selling miraa and that means great profit and rapid expansion (usually). All the groups are Phoenix groups (which means they are being targetted with sexual violence. Mostly this happens because they are the wrong tribe in the wrong place. Think Catholics and Protestants in Ireland during the Troubles. But no bombs. Just rape and battering.

In this particular group, 5 children, 7 women and 1 man have already been raped).

The next group want to move from Birika to Makueni and sell fish (both fresh and fried). 6 women have already been raped and 4 children – aged 2,4,6 and 7 years. Getting them the hell out of Birika would seem to be of the essence.

The next group are selling maize and beans (6 women and 5 young children have already been raped so hanging around is not a great option), then there is another bean group and one who want to sell butternut squash and who top the horror league at 8 children and 8 women having been raped already.

So, all in all, 80 adults and 207 children will be getting a new, safe, secure life, as of tomorrow.

Even before the last funding is done, Vicky is on the phone to the lorry drivers who help us (for money, of course) to move these groups away from a nightmare and into safety. All the necessary stuff to start the businesses will be bought tomorrow or brought by lorry.

Mama Biashara survives solely on money donated to it and money from its volunteer-manned charity shop in Shepherds Bush, London. 100% of all monies received are spent on the charity’s work.

You can donate to Mama Biashara via wonderful.org – CLICK HERE