Last night I went and belatedly saw the sixth movie in the Terminator series, which is sort-of the third because the script wisely ignores what happened in the 3rd, 4th and 5th movies and the TV series. 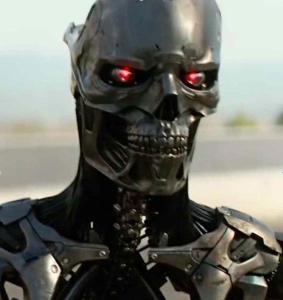 It is reportedly facing an estimated loss of $100 million to $150 million. Now I know why.

Only my opinion, of course – and what do I know?

But parts of the action sequences were cut to the point of disjointed abstraction – a style which seems to me to have started with the overly-edited action scenes in Joel Schumacher’s un-involving Batman & Robin in 1997.

And, in non-action scenes in a modern movie, you really do not need to see what I sat through in Terminator: Dark Fate – people walking or driving to a new location to get into the next scene. It’s padding; just as some conversational scenes were thrown in to create atmosphere but without any plot point. They were padding which varied the pace (good) but did not develop the plot (bad).

There was one missed chance where a mini-revelation which might have been quite effective was ruined by a shot in the promotional trailer.

Arnie may have aged 27 years, but why did the machine?

At least try to throw in an explanation.

For fuck’s sake, the movie cost $185 or $196 million to make: at least plug any holes which might detract from the audience’s willing suspension of disbelief.

It’s all the more surprising because there were signs that the whole thing might have been influenced by some committee which included (God help us) marketing people.

I like movies with kick-ass female action heroes but this one had three central female action heroes (well, two-and-a-half) and no male action hero – Yes, Arnie was introduced after a bit, but he really filled the traditional ‘sidekick to the hero’ role with action added. The feminist role casting, good in itself, may have arguably backfired because it was over-calculated.

One other, admittedly very minor, point is that the title Terminator: Dark Fate doesn’t really mean anything specific. It can be argued in vague terms that a ‘dark fate’ for the human race is averted but, really, there is nothing specific to the plot of this movie.

It smacks of some focus group or studio suit coming up with a seemingly ‘sexy’ but generic movie title.

Dark Fate is a phrase with a seeming ‘hook’ for an audience. But, really, you could sub-title any movie that – from Iron Man: Dark Fate to Beverly Hills Cop: Dark Fate to Snow White: Dark Fate – with as much relevance and effect.

It’s not big; it’s not clever. Not mean, not lean, not clean.