Lynn Ruth Miller on comedy in Singapore, London and Edinburgh

In immediately preceding blogs, she wrote about performing comedy in Cambodia, then in Bangkok, Saigon, Hanoi and Jakarta. Now London-based American Lynn Ruth Miller continues in Part 3 of a 4-part blog… 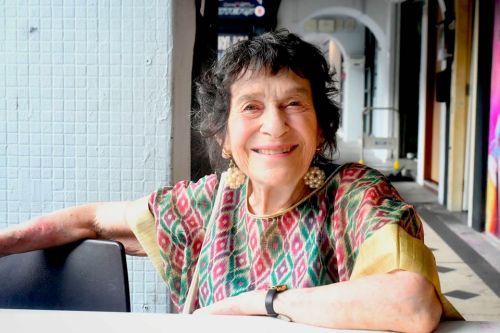 My next stop was Singapore.

The comedy scene there is not a good one in which to polish your craft. The open mike opportunities are sparse and, unlike London or even San Francisco, the only audiences at these events are other comedians and that is no way to judge if your comedy has a broad appeal.

In Singapore, they have only two outlets.

Umar Rana runs Masala and he always has international headliners. He is very good at employing locals, but his shows are only once a week and he cannot have the same person week after week. That means there is little opportunity to practice your craft with a real audience. There are too many comedians and too few slots to fill.

The Merry Lion began two years ago and is not as established. I was very interested to see if it had improved. It had been a very basic room with few comforts or amenities when I last performed there.

The result of this paucity of opportunity – only two outlets – is that the ‘big’ names here are not that effective in the larger international scene.

Here they are local headliners; in European venues throughout the world they are mediocre at best.

Comedians in Singapore who feel they have an edge want to go to the Edinburgh Fringe to get reviews and make an international name for themselves.

I find that appalling because they do not understand the true nature of what the Edinburgh Fringe has become.

It will cost them an inordinate amount of money. The cost of getting a show listed and advertising it – even if they are part of the Free Fringe or Free Festival – is very high.

They will be paying twice as much for food and three times as much for lodging as they would anywhere else in the world. The reviews they receive for the most part will be by amateur reviewers hired for no pay by the reviewing outlets who do not understand the challenges of doing comedy in your second language.

They may very well fill the house in Edinburgh (although I have my doubts about that) but, when they launch their career internationally, it founders because they are simply not sharp  or experienced enough.

And that is not because they are not funny.

It is because, despite what people think, it takes years and years to polish a set so it has universal appeal.

I have been doing this for 16 years and I have a natural talent for comedy. Yet, I am still far from there… and I have had plenty of opportunities to practice and to work on my delivery.

People in this part of Asia do not have those outlets.

Furthermore, standup comedy has become a business. You have to have a name that people recognize if you are to be booked at the major clubs who make a profit from their shows.

That becomes a Catch-22 situation because you cannot get that name unless you have the opportunity to perform and those chances are given to people who are already established.

I always tell comedians that they have to truly love doing what we do for its own sake. This is easy enough for me to say because I am on a pension and only have myself to support. If you have a family and expensive tastes, I do not know what to advise. It is true that money can get you pretty far in the field but then even kids with rich daddies (and I see far too many of them on the scene) grind to a halt.

Stand up comedy has changed my own life for the better. I am not sure even now if this is an individual thing because my previous life was such an unflushed toilet or something I can say will happen to anyone who devotes himself to it.

One response to “Lynn Ruth Miller on comedy in Singapore, London and Edinburgh”