What it’s like to be gay in Kenya today…

The below is from journalist Kate Copstick‘s ongoing diary in Kenya, where her Mama Biashara charity is based… 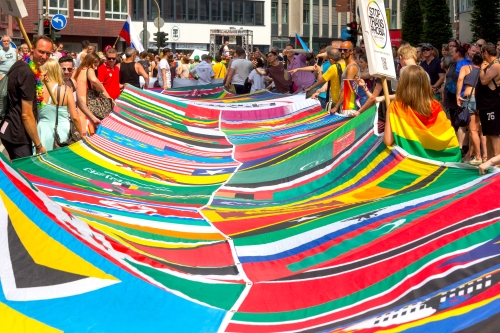 Cologne Pride, 2015… a banner with the flags of 72 countries where homosexuality is illegal

I need to tell you about the latest ghastliness to blight the land of happy safaris and dancing with Maasai.

A short while ago, the Kenyan government had a chance to behave like decent human beings and revoke laws criminalising homosexuality, in line with pretty much exactly what their own 2010 Constitution says. But no. They went with the old Colonial Penal Code forbidding “carnal knowledge contrary to the laws of nature” – which, according to people who obviously know bugger all about nature, means homosexuality.

Today I met up with Vicky for her beverage of choice – Cafe Latte – and a catch-up and planning meeting for Mama Biashara.

Vicky is straight, but a greater ally than could possibly be imagined in a country like Kenya. I ask her about the situation and she sighs the Vicky sigh that says things are not good.

Of course, there are beatings and killings (there always have been, but now the government has decreed they are probably for the best) and, of course, no one in a job is safe from being outed and immediately fired. Ditto people in rented accommodation.

60% of gay people (it is reckoned) have been or are still married with children here. And that means when they are outed very often those around them evince displeasure with their lifestyle choices by sexually abusing their children.

But the worst thing is that gay guys are frequently being denied access to AntiRetroViral drugs in government hospitals. And not just ARVs but all manner of medical treatment.

The gay community is fast disappearing underground, says Vicky. She has hundreds of people wanting help from Mama Biashara. So, this time, we are going to help a load of gay (and lesbian) groups to get to a safe place (few and far between) and start a business and a new life.

This will almost certainly be outside big towns, because even Mombasa – once very gay-friendly – has become ‘hot’.

Our big challenge will be finding safe places to meet them. But that is where our Mama Biashara network comes into play.

One group who is particularly desperate is, she tells me – wide-eyed – a group of gay Maasai men.

I cannot begin to imagine how tough it must be to be a gay Maasai.