The decline and possible fall of San Francisco, as seen by Lynn Ruth Miller 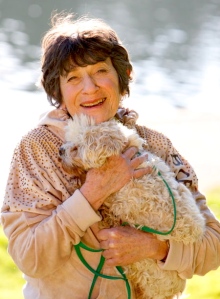 Lynn Ruth Miller back where she once was

The uniquely-talented American comedian and writer Lynn Ruth Miller has been on her travels again. This time she returns (almost) home…

I finally arrived in San Francisco at 10:30 the ‘next’ morning. I had gone more than a day with no sleep but, somehow, as soon as I landed in that familiar airport, I felt in sync with my surroundings.

My first night in the Bay Area is always spent reminding lots of people that I have arrived in the place that was once my home. I never felt very important while I lived here and never believed I made any kind of an impact, even though I had two television shows on their public access TV station and wrote for the local newspaper and a regional magazine.

California is one of the most liberal states in the Union, yet there is that American sub-context to all that we do: wealthy white men are in charge of us all. Everyone else is a lesser being and when any ordinary bloke earns a job promotion, accolades in his field or even a seat on the bus, he owes it to that hidden aristocracy that is in charge of all we receive and even what we dare to think.

That sense that no-one really matters in the bigger picture except those in the privileged class permeates the culture.

But, at my friend Leo’s house, I was treated like the most important human being on the planet and, of course, I ate that up.

Leo, his wife Carol and I always talk about the disintegration of San Francisco, because this once noble city filled with glamorous, sophisticated people has become a dumping ground for the homeless. Tents, sleeping bags, cardboard boxes and even RVs clutter the streets and empty lots.

San Francisco is no longer a safe city. If you walk alone on its streets you are targets for robbery, bullying, even murder. People are hungry and desperate here. And conditions get worse every time I return. 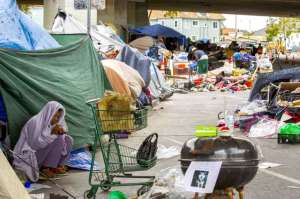 A homeless camp in Oakland in May 2017, as reported in the San Francisco Chronicle (Photograph by Santiago Mejia)

According to Leo, the homeless have set up encampments and the city is doing nothing to help them. They have become a scourge on the population and people are moving out of the city in droves. That is hard to believe when I see the traffic that clogs the highways. It seems to be bumper-to-bumper traffic at every hour of the day. So SOME people are still here.

Whenever Leo discusses the multitude of freeloaders who do nothing but take as much as they can from the state and do not want to work or even seek proper shelter even if you offer it to them, I think of my dear friend Brett.

Brett has miraculously reinvented himself. He has recovered from both drug and alcohol addiction, earned a degree in business in his forties and, with much perseverance, has climbed the employment ladder from the bottom. Now in his early fifties, he has qualified for a middle management job in San Francisco. His salary is right in line with what he should be earning. He had achieved his goal.

Yet he cannot afford to rent a flat of his own. He lives in a 10ft by 10ft room in a house he shares with two other men. The house is an hour’s commute from his work.

If people in well-paying jobs cannot afford decent housing, how on earth can we expect someone who is a clerk in a hardware store or who works in a bakery to be able to take care of his basic needs much less put a roof over his head?

Surely, a society as wealthy as this one can manage to give its citizens shelter, food, and a sense of dignity. To me, these are inalienable human rights.

The mayor of San Francisco, London Breed, has been trying to get legislation through that will create affordable housing but has failed. The city’s Board of Supervisors refuse to ease the antiquated regulations that make every building permit outrageously expensive and so complicated that nothing can get done. Hard-working people like Brett are destined to receive salaries that cannot possibly cover their basic cost of living.

Leo also is very disturbed by the deluge of illegal immigrants who come over here and claim medical and housing benefits for themselves and their children, when ordinary hard-working folk have to struggle just to keep a roof over their heads.

Sound familiar to British readers? It doesn’t seem to be Eastern Europeans milking the system over here. It is Mexicans and pretty much all people of color.

Leo is talking about a law passed in California that gives low-income adults between the ages of 19 and 25 living in California illegally the right to be included in California’s Medicaid program, the joint state and federal health insurance program for the poor and disabled.

However, these costs to the state are balanced by what is saved in police protection, medical emergencies and jail maintenance.

Illegal immigrants are people who do work for far less than minimum wage and are excluded from nearly all social services. It is greedy employers who hire these people because they do not want to pay a fair salary for the jobs they want done. They are causing this exploitation of hungry, desperate people willing to work for any wage just to have money for food.

I get the sense that Californians are very angry, especially in the Bay Area.

They see the prices of everything going up and up; wages going down and down; housing prices and rents soaring sky high; and their streets are littered with homeless colonies where people are defecating in the streets, belligerently demanding money from pedestrians and defacing the neighborhoods residents once all loved.

Those who are comfortably housed and comparatively well-to-do believe that homeless people are either drug addicts or lazy sloths who milk the welfare system when they could easily earn enough money to feed and house themselves. 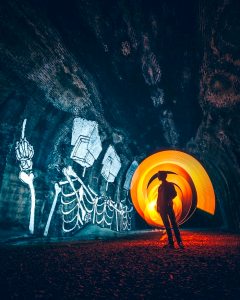 Yet every statistic insists that the majority of homeless people living in those tent cities on San Francisco’s streets are there because they lost their job and could not find another or the job they have does not give them enough money for both food and a roof over their heads.

Still, the city of San Francisco has a magic all is own.

Now that I am a visitor, I do not feel the despair that longtime residents feel.

I understand why tourists love the place. The free jazz on North Beach; the charming cable cars; the ocean and the Bay; the beautiful Victorian homes…

All of it is but a thin façade that hides furious, disillusioned and hopeless people failing to make a comfortable life there.

For way too many of my friends, this magic isn’t enough to offset the cost of living.  So many of them are moving to places like Austin, Texas… Ashville, North Carolina… and even Boise Idaho.

The beautiful weather and the gorgeous landscape is not enough to make up for the rampant crime on the streets and the outrageous cost of a loaf of bread.

Filed under Poverty, US