My dream is out-surrealed by reality… 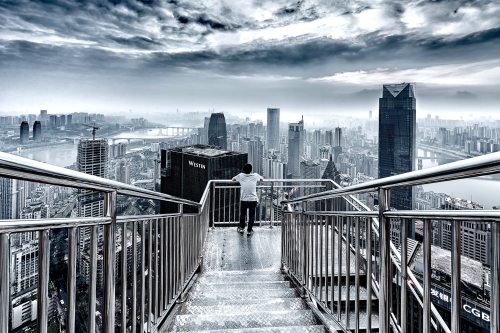 Yesterday morning, before waking up, I had a dream.

Well, that’s the way dreams work normally. You tend to be asleep.

I have no idea what triggered the dream.

I was looking down on the scene, either from a balcony or from the first floor of a building opposite. That’s the second floor for any readers in the United States.

Factual reality can be fluid.

I was watching a hidden camera TV show ‘sting’ going on.

I used to work for a couple of TV shows which used hidden cameras to pull ‘stunts’ in the UK – Game For a Laugh and Surprise! Surprise!

Fair enough. At least that has some connection with my reality.

From the right of frame in my dream, a young woman was approaching another person who was standing by some grey stone steps on the left. The young woman was an ordinary member of the public – she was the object of the TV sting.

As the young woman got to the other person by the steps, another older woman came in from the right.

She (the older woman) ‘misunderstood’ why the younger woman was meeting the other person by the steps and she turned away, back towards the right, distraught.

What she misunderstood and why she was distraught I had no idea.

The distraught older woman then walked off to the right and onto a grey railway station platform. But, instead of railway tracks beside the railway platform there was a choppy, grey, storm-swept sea with white foamy crests on the waves.

The older woman intentionally walked straight into the water and disappeared beneath the waves.

And then some man, who was in some way connected to the TV production, was being interviewed on television.

“So you write for The Times and…” the TV interviewer said to him and, somehow, I knew this meant he wrote for the New York Times.

“And…” the interviewer continued…

…and then I woke up.

I had no idea/have no idea how any of that connects to my reality nor what any of it meant.

The strangeness was in the back of my mind all day yesterday.

But made-up dreams and surreality can never compete with the allegedly real world.

Last night, I accidentally spotted an online article on a site called Catholic New York, which bills itself as “America’s Largest Catholic Newspaper”. Not a satire site… A real, genuine Catholic site.

The headline on the article was: 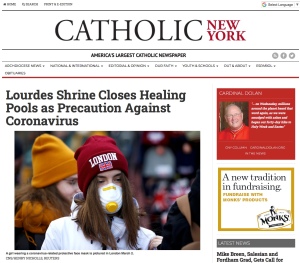 …and the story was, indeed, about that. It started:

“As the number of people testing positive for the coronavirus in Europe continued to grow, the French Shrine of Our Lady of Lourdes announced that pilgrims were still welcome, but the pools the sick bathe in hoping for healing would be closed temporarily…”

As Wikipedia currently correctly says, Lourdes is “one of the world’s most important sites of pilgrimage and religious tourism. (It) hosts around six million visitors every year from all corners of the world”… hoping to be cured of their ailments in its holy, healing waters.

Now, I am no Christian believer, but I just cannot get my head round how someone who believes that illnesses can be cured by God at Lourdes can possibly logically come to terms with the fact that the holy waters have had to be closed and put out-of-bounds in case a visitor should catch a current viral disease.

2 responses to “My dream is out-surrealed by reality…”