Simon Munnery on his first exhibition, buying vegetables and a new form of art 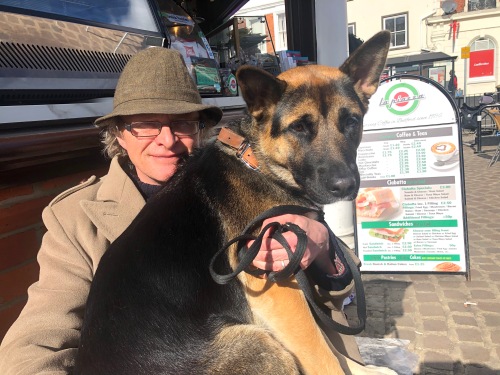 Simon Munnery with Tazzy, his over-large lap dog, out shopping for vegetables in Bedford…

Last Wednesday, I went to Bedford for a chat with ever-original comedy performer Simon Munnery. He travels about 11 miles to Bedford every Wednesday to buy his vegetables.

Since then, I’ve either been busy or lazy or I’ve been waiting for the coronavirus panic to settle in some way to find an angle. Take your pick.

But there is no angle. Simon’s first solo art exhibition What Am I? has opened in Bedford at Andy Holden‘s suitably quirky Ex-Baldessarre Gallery. It runs from noon to 6.00pm every Saturday until 9th May, coronavirus allowing.

Yesterday, Prime Minister Boris Johnson suggested everyone in the UK should avoid pubs, clubs, theatres and cinemas and that people who did not absolutely have to go out should stay at home – an end to “all unnecessary social contact.”

London theatres have already started to close. Who knows if smaller, intimate exhibitions like Simon’s will close? As of this morning, the art exhibition continues but his Alan Parker Urban Warrior ‘Farewell Tour’ comedy show is pausing, with luck recommencing in April, perhaps later. Just a week is a long time in a virus pandemic. This is what happened last week… 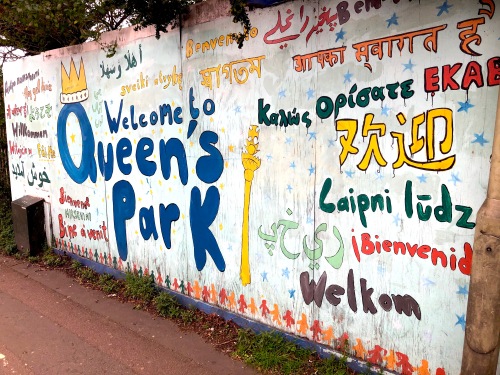 JOHN: You live in a village in the countryside. I thought you were a city boy.

SIMON: Born in Edgware, raised in Watford, died all over the place.

JOHN: So why are you living in a village?

JOHN: This is billed as your first art exhibition? Surely not.

SIMON: I had stuff in Arthur Smith’s art gallery at the Edinburgh Fringe one year. He turned a house into an art gallery. That was it.

JOHN: So this is your first solo exhibition.

JOHN: I’m surprised you haven’t been approached by a major London gallery before this. I mean, you’re a ‘Name’. The Scotsman described you as “The closest that comedy gets to modern art.”

SIMON: Well, a jacket of mine is in the Museum of Comedy in London: the jacket with cider cans all over it. And this art exhibition is booked to go to Edinburgh.

JOHN: During the Fringe?

JOHN: If there IS a Fringe this year because of the coronavirus…

SIMON: Well, we don’t know at this stage. If there is, I’m doing a show called Trials & Tribulations.

SIMON: Because you have to think of a title. I think the art exhibition may also be going to Stroud. Maybe it might go to London after that… The idea of a show that can tour without you is good.

JOHN: This sounds like a rounding-off-your-career type of exhibition. 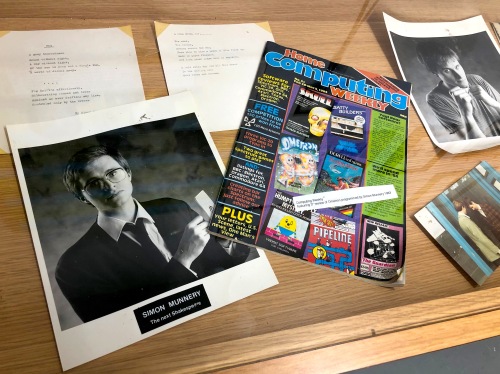 Simon Munnery, in his youth, billed as “The Next Shakespeare”… though with an interest in science

SIMON: Not really. It was Andy Holden’s idea. He’s an artist; he uses some of the space he has in his studio for a tiny gallery and he said: “I shall do you.” So I said: “Alright.” And that was it.

JOHN: There’s something in the exhibition which you did when you were nine years old.

SIMON: There’s a poem. Something about The Fog.

SIMON: I can’t remember it. I got a text from a neighbour that Mrs Nunn, my primary school teacher – there was some dispute at the time – says: “I still think you cheated on that poem.”

SIMON: I don’t know how. I didn’t. But it’s been following me round for 40 years.

SIMON: Just things that rhyme with fog, I think. The fog lingers… I can’t remember.

JOHN: I can’t remember what you studied at university.

SIMON: Science. Well, “Not much,” is the real answer. In the last year, I ended up doing ‘The History and Philosophy of Science’.

JOHN: Is that actually Science? Or is it History and Philosophy?

SIMON: I don’t know. I didn’t go to any lectures, so I have no idea what the course was like. I just slipped through the net and no-one noticed, really.

JOHN: This was at Cambridge.

SIMON: Yes. I met my Supervisor a week before the exam. Because I had never been to anything, he hadn’t written any reports about me saying how well or badly I was doing and I said to him: “Can you recommend one book?” and he recommended Against Method: Outline of an Anarchistic Theory of Knowledge by Paul K Feyerabend.

So I read that and regurgitated all his arguments – which was basically saying there’s no such thing as the philosophy of science, along with some really good examples about Galileo… And I passed on the strength of reading one book.

JOHN: Did you get a good degree?

SIMON: A third. It goes First, Second, Third, so Third is the best.

JOHN: It’s the best because…?

SIMON: Because it’s the highest number. If you are utterly brilliant, you can get a Fourth.

JOHN: Why did you do science? You’re very arty.

SIMON: Am I? To be honest, in school subjects, I was quite good at everything. But when you got to ‘A’ Levels, at that time, you had to choose one or the other.

JOHN: You must surely have wanted to be an artist as a kid. You’re not usually doing straight stand-up in your shows. You’re always trying to work out some new, original, unique angle.

JOHN: But you could keep busy by doing the same old stuff over and over again.

SIMON: Well, I AM touring Alan Parker: Urban Warrior again. It’s billed as a ‘Farewell Tour’. But it has resurrected very nicely. I think it’s funnier played by someone in their mid-50s rather than their mid-20s, when I first did it. He’s still anti-Thatcher. The fact she’s dead now doesn’t make any difference to him. It’s like a bedrock. But there are new bits. Climate change. Extinction Rebellion and all that.

Reflections on a much younger Alan Parker, Urban Warrior, in one of the art exhibition’s videos…

JOHN: You performed for Extinction Rebellion…

JOHN: Anyway, to get back to the exhibition… Andy Holden decided you were going to have an exhibition. So how did you choose what to include in it?

SIMON: I didn’t. I submitted things and he chose what to put up… I did have this massive canvas in my shed, which had been there for years… When I was spray-painting buckets, they rested on the canvas, so there were strange patterns on it. I tried to get that in the exhibition, just to get rid of it out of the shed, but he REALLY objected to that.

JOHN: Couldn’t you claim it was post-modern…?

SIMON:  That’s what I tried. But no, he wouldn’t have it.

JOHN: There must be phrases. ‘Post-modern’ is usually a good one. ‘Meme’ is a good one now. I suppose ‘Zeitgeist’ is a bit old-fashioned.

SIMON: I might have got away with just ‘Abstract’, but I feel it’s destined to stay in the shed.

JOHN: Couldn’t you have claimed it was about the Iraq War or something?

SIMON: A good title might have saved it. But no. He gave me some canvases and asked me to fill them and I printed out some stuff and he selected what he wanted. I did make an Alan Parker from an Action Man doll. 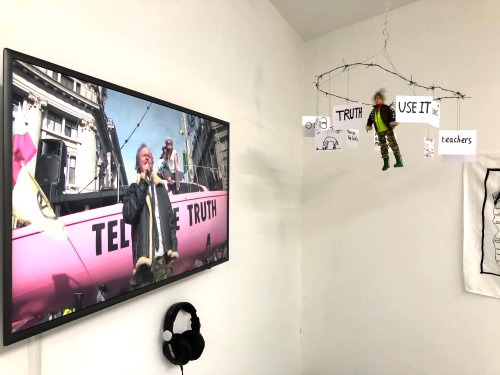 SIMON: Yes. Did you notice how padded its tummy was?

JOHN: Was it pregnant?

SIMON: No, but your standard Action Man isn’t the same shape as me.

JOHN: There was the wall with lots of quotes on. 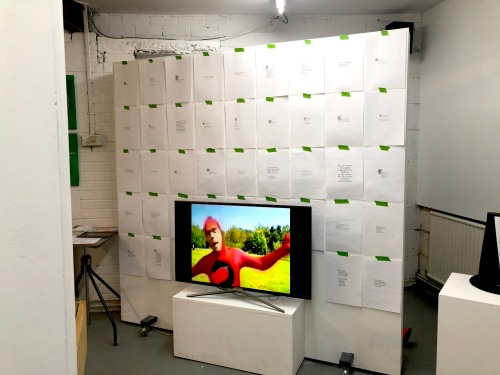 SIMON: That is only two-thirds of one year of my AGM show. I have sacks of those.

JOHN: So you were just trying to empty your house. What’s next?

SIMON: I came up with a format for a new form of Art… Roadside placards.

SIMON: You often see an advert at the side of the road but you could put a sentence… then another sentence… and another sentence… and it would build up into a paragraph. Or maybe not even a sentence or a paragraph; just an image and then another image that replies to the previous image. You could prove Pythagoras’ Theorem entirely in images. People could learn as they drove past. Your experience would alter depending on the speed you were travelling at. You could design it for cyclists or car drivers or something to make people slow down. I dunno.

I was imagining green-on-brown so you would have to know it was there, maybe. Secret Art.

SIMON: Pictorial proof of Pythagoras’ Theorem. It could be done. The format of roadside placards has not been fully exploited.

JOHN: More immediately, what next for you?

SIMON: I’ve bought eggs from the egg lady. She’s not shaped like an egg; she sells eggs. I’ve got my fruit and veg. I was supposed to be getting toilet rolls. We are running out at home. I went to the supermarket – none. Other people’s houses must be full of toilet rolls. 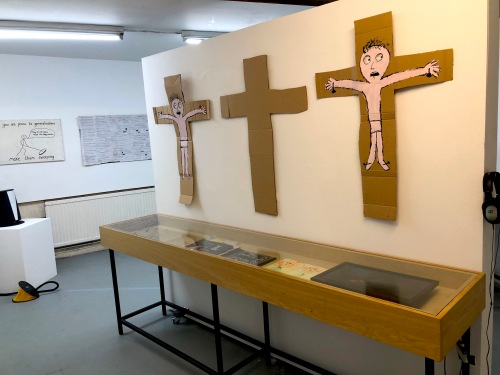 Simon Munnery’s exhibition What Am I? runs in Bedford every Saturday until May 9th, probably.