The latest figures for coronavirus-related deaths in UK hospitals are 592 deaths in the last 24 hours (down from 888 yesterday)… So now 16,060 in total.

My friend in Central London, who has a close friend with coronavirus in a hospital’s Intensive Care Unit updated me on his current situation:

“I spoke to the hospital earlier. Things are not going well since yesterday. They have been reducing sedation over recent days but he was not coming round, so they stopped all sedation last night… but he’s still not waking up. ‘Neurologically unresponsive,’ they said just now. CT scan of brain later. Today will be a tough day. I am full of fear.” 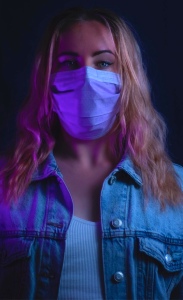 (Photo by Luke Jones via UnSplash)

A friend who lives near Milan tells me that the Italian government is going to start easing some restrictions and trying to re-start things on May the 4th. I suggested on Facebook that the Italians must be big Star Wars fans… I was told by someone that this did not work when translated into Italian.

Lynn Ruth Miller, an American living in London – who recently contributed a piece to this blog Diary – writes:

I am an 86-year-old woman. I am a performer whose life revolves around travelling throughout the world to do my act. I am in comparatively good health. I live alone. I have no children, no partner, no family. Because I am in a third floor flat, I have no dog or cat. I am in relatively good health with no debilitating pre-existing conditions.

Governments the world over have told their populations that all people over 70 must go into social isolation. That means I must stay home without visitors and talk to no one face to face. If I need exercise I should walk around the garden. But I do not have a garden.

This social isolation is robbing me of my future. Let’s face it. 86 is the beginning of old, old age. Every day my horizons are less distant. The end of my life is nearer. Each moment that I am able to live a purposeful and rewarding life is especially precious to me because those moments diminish every day. They diminish for us all, of course. But the reality is I have less time left to enjoy them than someone who is younger.

Since March 15 when we were advised to stay inside, I have not been face-to-face with a living, breathing human being. I have not held anyone’s hand; I have not hugged a friend or petted a puppy.

I do not want to get sick. I do not want to make anyone else ill. But I do want to smile at someone who smiles back. I want to tell a joke and hear the laughter. I want to feel a human presence. Live-streaming on a computer screen doesn’t do it for me. 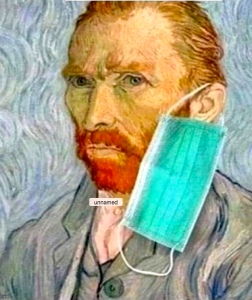 Wot’s this ear? It’s some wag’s image of van Gogh

Uncertainty continues about whether people in the UK should wear or not wear masks when out. Jokes have appeared online. One source-unknown wag visually pointed out that Vincent van Gogh would have had problems attaching even a simple face mask.

The real world gets even more surreal than that. The price of oil has turned negative for the first time in history. This means that oil producers are paying buyers to take the stuff off their hands because demand has dropped so sharply and suddenly – because lockdowns across the world have kept people in their homes – that the producers’ storage capacity could run out in May. 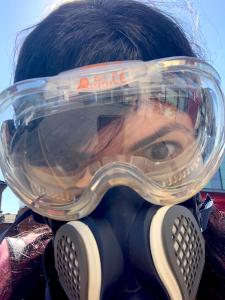 One friend of mine is taking no chances…

The debate on whether to wear face masks or not continues in the press and one friend of mine is taking no chances by wearing full serious face mask and goggles when she goes out. This is 100% true.

Her equipment may seem over-precautious and certainly likely to keep strangers in the street at a socially-acceptable distance. But the virus can enter the body, it is said, through your mouth, nostrils or eyes, so only wearing a flimsy mask covering mouth and nose would leave your eyes open to attack. 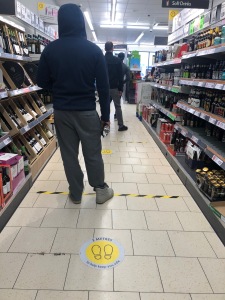 Correct social distancing is marked on the floor

Most of the large chain food stores now have positions marked-out on the pavement outside and the floor inside to help keep social distancing (2 metres) from each other.

It has been a bumpy old week. From being told by a doctor on Sunday that we should prepare for the worst because my friend was not coming round from two weeks of deep sedation and that a CT scan of his head would assess possible brain damage, to being told that the CT was thankfully clear.

But then he needed several blood transfusions as his haemoglobin kept rapidly dropping. The doctors were looking for an internal bleed somewhere, but could not find one. So that was all very worrying.

Then yesterday the ICU consultant said my friend was doing as well as can be expected and seems to be following the same course as others who are further along (a week or two) in the COVID-19 disease process. He clarified that As well as can be expected means still critically ill. He also explained (perhaps unnecessarily) that they are literally stopping these patients from dying every hour of every day… A ‘good’ day for a patient means “still alive” and they don’t want to give false hope, even when small forward steps are logged…

However, today when I spoke to an ICU nurse, some small forward steps had been logged. Although still on a ventilator, he is now initiating his own breaths and seems to be holding his own. But, a week after removing all sedation, we are still waiting for him to come round. Last Sunday he was “neurologically unresponsive” which sounded pretty endgame-ish. However today I’m told that his pupils are reactive and that he has a good cough (which, in ventilated patients, is apparently a good thing). Small steps.

The total deaths related to coronavirus in UK hospitals now stands at 18,738 – a rise of 616 deaths in the last 24 hours.

Bizarrely, Captain Tom raised more than £28 million by walking round his daughter’s back yard. We live in strange times.

Also last night, “somewhere in Southern England”, my friend Lynn shot a video which shows that cabin fever has hit the local Brits in total lockdown…

In a press briefing yesterday, President Trump suggested that sunlight or ultraviolet light could be put inside the body – or disinfectant injected into the body – to treat coronavirus. After a backlash, particularly from bleach manufacturers who issued statements telling people not to drink their product, the man with his finger on the nuclear button claimed he was being sarcastic and/or joking, despite the video clearly showing he was being serious.

My friend in Central London spoke to the ICU consultant again today.

The consultant is cautiously positive about my friend’s progress on the ventilator. He is initiating breaths for himself, and the ventilator helps to fully inflate his lungs. His ventilation requirement is now less than 50%, which is still life support but a lot less than it was even a week ago. This whole process is called ‘weaning’ from the ventilator and is done by minuscule reductions.

He also briefly opened his eyes this morning before drifting off again. The consultant expects it will still take some time for him to come round properly because his lack of kidney function means the sedation is still hanging around, even a week after they stopped it. Some COVID-19 patients are taking weeks to wake up, he said.

I asked about the previously mentioned tracheotomy, but they’ve decided not to rush the decision. He said the option with the best outcome would be extubation (removing the breathing tube completely and stopping ventilation) when they are more confident that he can breathe on his own. However, a tracheotomy for continued longer-term ventilation might still be necessary although not ideal, as patients who go this route have a worse prognosis. The consultant said they will see how the weekend goes and review on Monday.

As always, it was stressed that my friend is still critically ill, needing life support, and that there is no guarantee of a good outcome. But the consultant added that his team does think my friend has a chance of recovery, otherwise they wouldn’t still be fighting for him…

So I see this as a glimmer.

Another friend I know – an anaesthetist at a local hospital – agreed that this all sounded encouraging. However he cautioned that, even if he does make it out of hospital, my friend’s lungs and/or kidneys might be permanently damaged. A high proportion of long-term ICU patients have psychological and psychiatric problems such as Post-Traumatic Stress Disorder and depression (not to mention the much-documented ‘ICU delirium’). There is also a high risk of cognitive impairment. And the road to recovering some level of normal life will be measured in years, not months, with an army of physio and rehab support. He will need 24/7 care for months and obviously somebody living-in when he returns home. So there is a glimmer. But. at the same time… fuck!

UK hospital deaths related to coronavirus went up by 684 in the last 24 hours, making total deaths 19,506. Deaths in the US, where President Trump, despite figures to the contrary, says they are over the peak, have gone over 50,000. Globally, deaths are around 195,000.

Meanwhile, Captain Tom got to No 1 in the hit parade with his rendition of You’ll Never Walk Alone.

The Guardian reports today on Mark Grenon: “The leader of the most prominent group in the US peddling potentially lethal industrial bleach as a ‘miracle cure’ for coronavirus wrote to Donald Trump at the White House this week… Grenon styles himself as ‘archbishop’ of Genesis II – a Florida-based outfit that claims to be a church but which in fact is the largest producer and distributor of chlorine dioxide bleach as a ‘miracle cure’ in the US. He brands the chemical as MMS, miracle mineral solution’, and claims fraudulently that it can cure 99% of all illnesses including cancer, malaria, HIV/AIDs as well as autism.”

Meanwhile, in Britain, rounding off the week, Romanian entertainer Dragos Mostenescu’s latest video shows he has found it is easy to get distracted when homeschooling his children in locked-down London…