(Photograph by Engin Akyurt via UnSplash)

A message from my friend in Central London, whose friend has been in a hospital’s Intensive Care Unit with severe coronavirus since 4th April:

He is now awake and nodding/shaking his head to questions. He’s comfortable.

Doctors this morning decided that taking him off the ventilator for long periods tires him out too much – I was wondering about this too  – because, when he’s had some hours off it, it seems the next day he’s so exhausted he just sleeps. So they’ve set a regime of twice a day (morning and afternoon) for shorter periods, with just supplemental oxygen mask. His oxygen requirement a the moment is down to 35%.

This new regime could mean that finding time for a video call from me is difficult because there’s more to sort out with him during course of the day. So I sent our love and hugs and they will pass it on. The nurse said they tell him whenever I call, which I didn’t realise, so that’s lovely to know.

Further encouraging news is that he’s still off the kidney machine, and managing, even without diuretic medication. They’re keeping a close eye, but even if he has to go back on the machine for a bit, it’s surely a sign that his kidneys are starting to function?

My friend Lynn’s husband Frank points out to me that, last night, the Prime Minister said in his  TV address that, if possible, we should travel to places of exercise not by public transport, but “use the car”.

Not A car but THE car.

Where is this car kept? And do we need to fill in a form to get access to it? Or will Rishi, the Chancellor of the Exchequer – in a further display of generosity – buy us all a car to stimulate the economy?

Frank rightly thinks we should be told.

Frank and Lynn are taking ro risks, even at home… 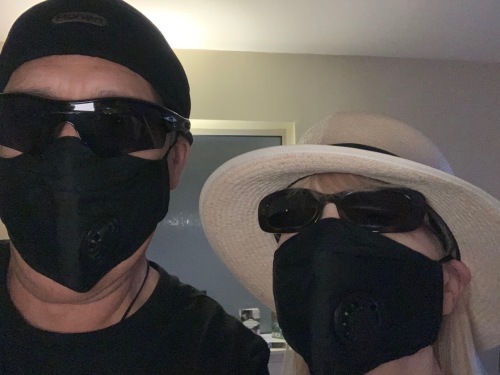 …Frank and Lynn in coronavirus face masks, possibly auditioning for a future series of Narcos…

My friend in Central London updated me on her friend:

I have just had my daily chat with the ICU nurse, Angela, who is looking after him. Luckily the ICU is becoming quieter as we are past the peak.

At the end of the call, she said: “We’re telling families please don’t listen to Boris Johnson. Please stay at home and tell all your friends to stay home… R below One doesn’t mean no new cases! We on the front line don’t want to go back to where we were a month ago. Our patients are here for between 2 weeks and 3 months to date – Those that make it. We can’t risk a second spike. Please don’t listen to Boris.”

He was basically saying what she says. I understand his speech meant that even when we have a useable vaccine (which could be July next year) with an R of 0.01, there will still be infections and some deaths. 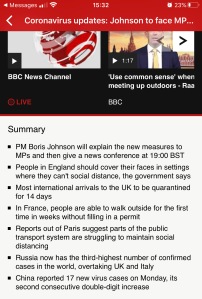 Russia, the BBC reported, now has the third-highest number of confirmed cases in the world, overtaking the UK and Italy.  (I understood the US was up there) If  Russia is admitting this, the statistics must be way way higher.

A couple of weeks ago there was a report of 9-mile queues of ambulances waiting to get into hospitals in (I think it was) St Petersburg. There was footage from a camera in a car of a seemingly endless queue of static  ambulances on the other side of the road.

Of course, deaths per population is the important statistic. The UK government is only regularly releasing total numbers, not deaths as a percentage relation to head of population.

There really are lies, damned lies and statistics.

The government has now decided to “advise” but not tell us to wear facemasks if in shops where social distance cannot be ensured.

My Eternally un-Named Friend came round unexpectedly to my home circa 1730 to deliver a facemask to me. I had suggested she posted it. Very kind indeed. I had not been out for a couple of days – too sleepy and so on.

I have been sitting a lot on my sink-in-the-seat sofa. which is never good. My spine – injured when I got hit by a truck in 1991 while I was standing on a pavement – has never fully recovered.

My Eternally un-Named Friend thinks (and might be right) that I am also not eating properly, because I am trying to diet. She had to steady me with her hand three times

After she left and I was back home, sitting down on the sofa, I was OK.

I will probably sleep on the floor tonight. Nothing worrisome, just a glitch.

I have only just got up, just before noon. I suspect I will be erasing emails for hours. I didn’t erase any yesterday; only read ones from real people I know; didn’t trash any from the acres of email lists I am on.

Shortly after going to bed (the floor) last night, I was very snotty – loads of globs of snot which I had to blow out of my nose. And bits of phlegm in my mouth.

A couple of hours later, I woke up with a sharp pain in my lower throat and had to take a Tyrozet to sooth it. Pain went down into my chest, then stomach; presumably making its way down a tube.

My throat was OK this morning, though. Slightly snotty and coughy still. And a tiny bit uncertain on my feet. My balance not 100% right.

At around 1000, performer Martin Soan woke me up with the news that Dave ‘Bagpiper’ Brooks had died, aged 72. I collected some info on him, then was so tired I had to go back to sleep.

Mid afternoon, around 1515 – I woke up to write a blog about Dave Brooks’ death. I had a sharp pinprick headache in my right temple. If I touched it, the pinprick pain was worse. And it also sometimes went round the back of my neck. It lasted about 2 hours.