CONTINUED FROM DIARY No 15 …

Throughout the night, I was on a liquid drip, linked into my left arm.

0930 – The first of the needles and blood tests begins.

First new consultant of the day. A white South African. Never usually a good omen. But she seems fine.

Now a drug bloke with questions about my lifestyle. Alas, I am very dull. No smoking. No drinking. No recreational drugs. No bestiality beyond the norm. 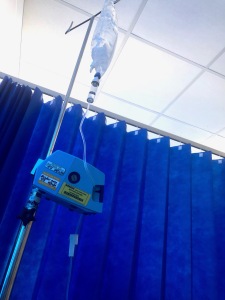 Around midday, I have to drink unexpected vegetable soup and have a new drip tube inserted into my left arm linked to a bag of gooey solution. I have to keep my left arm as straight as possible otherwise it cuts off the electrical thingie between the bag and my arm. Not good if I want to eat or hold an iPad with my left hand and type with my right hand.

It will be there for the next 8 hours, so presumably they won’t be sending me home today. Hopefully tomorrow.

This billed day of multi-tests has turned into some brief blood-taking at the start… then the first four hours (1200-1600) of new planned 8-hour drip treatment.

A new bag is attached at 1700 and the next bit is now going to be three 2-hour bag drips – presumably ending at 2300. So one suspects definitely not getting out tonight!

I am reattached to this new drip bag for my latest 6-hour stint at 1700 but then taken along corridors at breakneck speed in a broken wheelchair (although I can walk fine) for a scan.

There had been some bureaucratic SNAFU – the scan people hadn’t known which ward I was in.

The wheelchair pusher was very much a jobsworth. He told two other wheelchair pushers we passed by that they were leaving their wheelchairs in the wrong places and told a cleaner bloke outside the scanning room that a couple of other staff had been saying he (the scanner bloke) had been being lazy but he (my bloke) had said the other guy was a good worker not lazy. Psychological workplace politics at play.

I had the scan lying on my back. They scanned from top of my chest to my pelvis, to include lungs, liver kidneys, etc etc.

It was then back to my ward where my evening meal was waiting at around 1810 but I was only reattached to my drip around 1830, presumably to avoid me switching off the drip by bending my left arm when eating. Who knows when this attachment to bags will finish?

“So bad at chemistry, my teacher emigrated”

They have just (1041) changed the drip feed bag again.

I have already had another blood test. The nurse (Hispanic) says this new bag is for eight hours. I guess that means another night in.

A nurse tells me the liquid in the bag is 98% or 99% water and the rest sodium chloride. It is only later I realise ‘sodium chloride’ is actually salt. Like I knew?

At school, I was so bad at chemistry, my teacher emigrated to New Zealand. I am convinced my inability to do the subject was at least a contributory factor.

Yesterday, a young Thai nurse told me this is an awkward ward to work on because the patients tend to be old men, some either doolally (my word) or very awkward.

My night nurse was a black (I guess from the accent) African lady.

This morning, round about dawn, further down the corridor, my African nurse was having an argument with an old patient. Raised voices, I’m guessing because his hearing was not good:

SHE – “You have wet yourself. I have to change you. Your bottom is full of poo.”

She eventually got him to let her look after him by a combination of shouting back and not letting him tell her what to do – to leave the room etc – and by getting some laughter into their exchanges as if they were chums having a play fight.

Then she immediately had to come back into my ward where she was quietly tender, gentle and caring to a patient. She should write a book on psychology: How To Control Uncontrollable People Who Have Uncontrollable Mouths.

One clever thing they seem to have done in the hospital – this is only my guess from observation – is to split the teams on ethnic or linguistic grounds. I have so far not seen any white nurse. All 100% are non-white, multi-ethnic, multi-national.

My night team are black Africans and share a language – I’m guessing Swahili but the main nurse is probably West African.

During the day I have Spanish-speaking teams. (Not necessarily from Spain itself.)

Occasionally there are a few Asians – Thai, Chinese-origined, Filipino etc.

What this means is, as they are almost all working in a second language, they can communicate nuances to each other in their own shared first language and there can be clearer communication.

In strict PC terms, there should not be teaming by ethnicity or nationality but, in this case, I think linguistics and a shared social background wins over.

The doctor tells me they still have no idea what is wrong with me. So they are just testing everything in sight. I will be in here at least one or two nights, I am told.

If they can find a cause for my calcium and kidney problems, then they can maybe send me home. If not, more needles ahead.

During the current coronavirus lockdown, the hospital allows no visitors unless you are dead or giving birth and then only (I think) one person. There are special rules for the end-of-life wards, but I’m not exactly sure what they are and it would seem presumptuous to ask a nurse.

I get a text message from British performer Matt Roper in the US… “God forbid I ever have to stay in a hospital in America. I pay $355 for health insurance every month and I’m still billed for co-pay regardless. I have to pay $30 for a visit to a GP, $50 for a specialist, $35 for urgent care and $200 for a trip to A&E. They are running a racket. God bless the NHS.”

Ariane Sherine, currently training to be a celebrant at Humanist funerals (true), has offered to give me a free funeral. It is a bargain, though there are personal pros and cons to my having a funeral right now.

Personally, I think a funeral for me is pointless and have told my executrix Lynn I don’t particularly want one – Just bung me in the ground.

But I don’t really care: the real me won’t be there.

Unlikely to happen in the near future, but a pig may fall on my head at any time.

Worldwide, that is not as uncommon as it might seem. 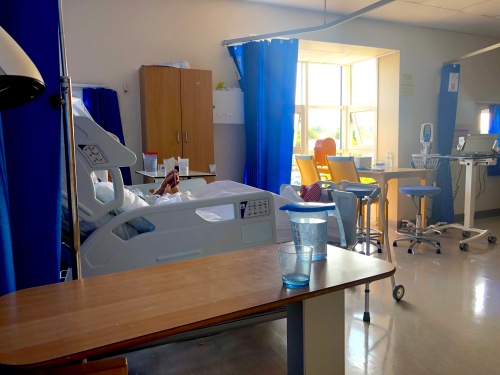