Writer/performer Ariane Sherine‘s hugely-talented 9-year-old daughter sent me a song which she had composed about eggs.

Apropos nothing, I was reminded today that, when I worked at Thames Television in London, one of the executives had the job title Head of Further Education and Religion, abbreviated on memos etc – rather appropriately – as Head of FEAR.

As anyone who wisely reads every posting of this blog knows, I was recently in hospital because my calcium level was very high and my kidney function was very low. The doctors still do not know why.

Back in June, I mentioned in a blog that, when I brush my teeth, I have always cleared my mouth by drinking water straight from the tap – and, in the recent hot weather, was drinking a lot of water from the tap. I wondered if the high calcium level in my body could be due to this drinking from the tap which had developed a (possibly calcium) deposit on it.

Today, my friend and executrix Lynn caught up with reading that blog and commented:

Tap water is far safer and cheaper and better for you than any bottled water – but the only drinking water in the house is the kitchen sink tap.

If you are really not trusting even the tap water then boil it, let it cool and bottle it – that is assuming your kettle is scale free?!

Scale is what is clinging to the tap in your photograph and that can be removed with a limescale cleaner – although a cloth/old sock soaked in vinegar or lemon juice and wound around the tap overnight works just as well.

The kitchen tap is a direct feed to outside and is as pure as it can be, whereas all the other taps are fed through the house system and often from a tank in the attic full of…

Well, perhaps we won’t think about that.

The UK comedy circuit is currently, temporarily dead because of the coronavirus pandemic – live venues are closed.

The BBC has now announced it is on “a mission to kickstart live stand-up again” with “a new stand-up series designed to support grassroots comedy talent”.

The unique and original President Obonjo…

Given that, last year, BBC Studios attempted to rip-off President Obonjo’s long-running unique circuit comedy act with a claim that no-one in BBC Studios had ever heard of said unique act that had been successfully playing the circuit for ten years and had got 4-star reviews at the Edinburgh Fringe…

…and, given that a BBC Studios producer told comedy critic Kate Copstick that they “don’t have much to do with live comedy” and that live circuit comedians are “not nearly as important as they think they are”…

…it will be interesting to see how this change of thinking works in practice.

The line-up for these six half-hour shows has not yet been announced. It will be interesting to see if the BBC peoples it with genuinely talented new-to-TV live circuit comics or the same old rosta of familiar TV comics they already have drinks and expenses-paid meals with.

Is that bullshit I smell in the air?

More refreshingly, I got an email from The Iceman, the very amiable and surprisingly sane man I first met when he auditioned for The Last Resort With Jonathan Ross – ooh! – a century ago..

Since then, The Iceman has long-taken to creating fine art and re-styled himself as ‘The Artist formerly known as the IceMan’ (AIM).

The Iceman (AIM) has self-launched into Space. The Duck is the same duck previously referenced by myself/yourself in previous Blogs [from a hotel in Southampton!].

Both The Iceman and Duck survive in space through connection to the Ice-Block and previous intense mind training exercises on Earth. 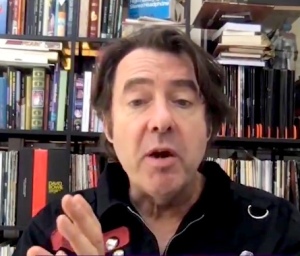 Jonathan Ross – a man who actually cares about new talent

Following on from the BBC’s alleged search for alleged new comedy talent, ITV have now announced an upcoming series with Jonathan Ross which will “showcase the very best new talents performing in a recreation of the vibe and atmosphere of a small comedy venue, all filmed within COVID guidelines.”

There is actually some chance of finding genuine new talent here, as it’s the energetic and enthusiastic Jonathan as opposed to the lazy, uninterested BBC…‬

“This new series,” the publicity says, “will see him get behind fresh new comedians on the cusp of their big break, offering them a stage upon which to make people laugh.”

Meanwhile, The Iceman emailed me his paintings of comedians Stewart Lee and Mike Myers, both fans of his. 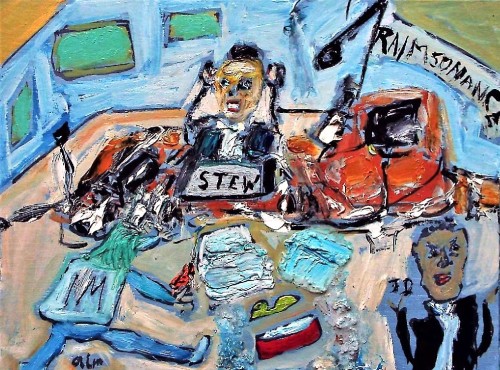 Mike Myers (left), a fan of The Iceman, having his mind expanded by The Iceman’s performance

From today, everyone going into a shop or supermarket will have to wear a face mask in an attempt to stop the spread of the coronavirus. There is the distant threat of a £100 fine for anyone not wearing a mask.

The London Evening Standard reported a man had walked naked down Oxford Street wearing nothing but a mask (covering his genitals).

Meanwhile, The Iceman sent me multiple photos of multiple happy buyers of his art. 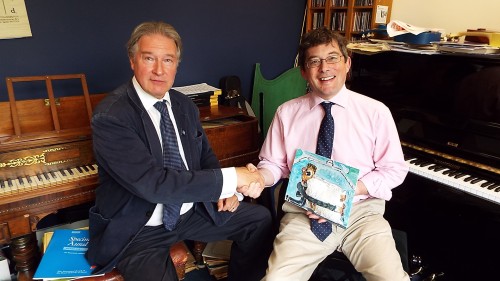 A delighted buyer (right) of one of The Iceman’s ice-citing paintings is congratulated by the artist.

“The happiest buyer,” The Iceman told me, “is Tobias with a poster of 42 of my ice blocks. It has increased hugely in value since his purchase date.”

Tobias, left, yet another delighted member of the public who invested in a valuable Iceman artwork.

Unrelated to this barrage of self-publicity from The Iceman, I coincidentally went into my local Iceland supermarket this afternoon. 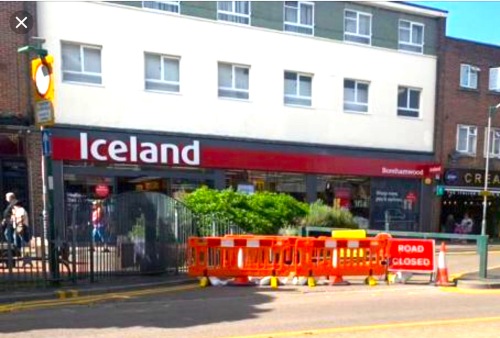 100% of the customers were wearing face masks.

0% of the five staff were wearing masks – one at the checkout, two wandering around filling shelves and two having a close-up conversation beside the checkout man.

Apparently shop staff are not required under the government regulations to wear masks. I can’t help but feel the government has not thought it through and this rather undercuts the purpose of wearing masks in shops.

Seeing that the staff don’t actually need to wear masks for any public safety reason will discourage people from wearing masks in shops.

When smoking was banned in pubs, I didn’t think that would work but it did because the pub risked getting fined, not the punters. ‬

Later in the day, I received another email from The Iceman:

It is a diagram in space explaining the significance of The Iceman’s ice block. It is self-explanatory.

The Neowice comet is aiming for the Block.

He also sent a self-portrait photo (below) of the artist “as he prepares his canvas by balancing it on his head prior to painting to ensure the concept is properly absorbed in advance.”