More UK National Health Service chaos: my life is in their incompetent hands… 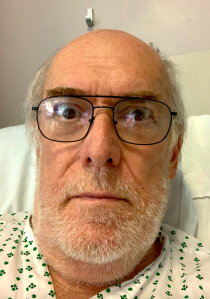 In hospital in, erm… who knows when?

As long-suffering readers of this blog will know, I was in hospital for seven days in May last year and again for seven days in July this year with a very high calcium level and (as a result) dangerously low kidney function.

No-one has been able to find out the cause. So I keep seeing consultants, mostly kidney and calcium men.

My kidney/calcium levels are pretty-much but not-quite back to normal now. But, still, no-one has any idea why they twice went dangerously haywire.

I wrote a blog in August this year when I simultaneously got three completely self-contradictory and chaotic letters about NHS hospital appointments.

In September, I was told my next appointment with the Nephrology team (my Kidney Man) would be on Monday 13th December at Hospital A.

Then, this afternoon, I got a text from Hospital B, which is part of the same group as Hospital A:

I did and responded:

I’m confused. Can you clarify?

I have an appointment to see Nephrology at Hospital A on 13th December at 10.30. (See attached letter.)

I had no appointment to see the Renal Dept at Hospital B on 16th November.

You also seem to ‘confirm’ I should attend a Kidney & Urology appointment at Hospital B “on Wednesday” (no time given but presumably either Wednesday 10th November this week or an unknown Wednesday in December).

Could you tell me if the ‘new’ Renal appointment on Tuesday 20th November (a date which doesn’t exist) is the same as the Kidney & Urology appointment I have never previously heard about at an unknown time this Wednesday 10th November?

If I do have to attend Hospital B this Wednesday, could you give me a time for the appointment?

2 responses to “More UK National Health Service chaos: my life is in their incompetent hands…”