George Orwell: Nineteen Eighty-Four. The Principles of Newspeak, Part 3 of 3 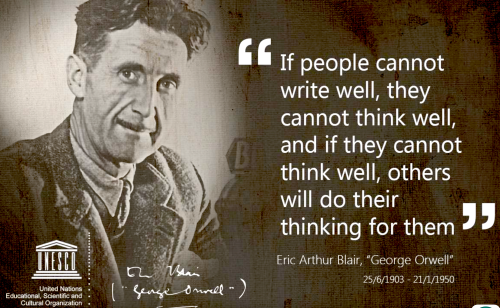 Continuing from yesterday’s blog, here is the conclusion of the Appendix to George Orwell’s  novel Nineteen Eighty-Four…

The C vocabulary. The C vocabulary was supplementary to the others and consisted entirely of scientific and technical terms. These resembled the scientific terms in use today, and were constructed from the same roots, but the usual care was taken to define them rigidly and strip them of undesirable meanings. They followed the same grammatical rules as the words in the other two vocabularies. Very few of the C words had any currency either in everyday speech or in political speech.

Any scientific worker or technician could find all the words he needed in the list devoted to his own speciality, but he seldom had more than a smattering of the words occurring in the other lists. Only a very few words were common to all lists, and there was no vocabulary expressing the function of Science as a habit of mind, or a method of thought, irrespective of its particular branches. There was, indeed, no word for ‘Science’, any meaning that it could possibly bear being already sufficiently covered by the word Ingsoc.

From the foregoing account it will be seen that in Newspeak the expression of unorthodox opinions, above a very low level, was well-nigh impossible. It was of course possible to utter heresies of a very crude kind, a species of blasphemy. It would have been possible, for example, to say Big Brother is ungood. But this statement, which to an orthodox ear merely conveyed a self-evident absurdity, could not have been sustained by reasoned argument, because the necessary words were not available.

Ideas inimical to Ingsoc could only be entertained in a vague wordless form, and could only be named in very broad terms which lumped together and condemned whole groups of heresies without defining them in doing so. One could, in fact, only use Newspeak for unorthodox purposes by illegitimately translating some of the words back into Oldspeak. For example, All mans are equal was a possible Newspeak sentence, but only in the same sense in which All men are redhaired is a possible Oldspeak sentence. It did not contain a grammatical error, but it expressed a palpable untruth — i.e. that all men are of equal size, weight, or strength.

The concept of political equality no longer existed, and this secondary meaning had accordingly been purged out of the word equal. In 1984, when Oldspeak was still the normal means of communication, the danger theoretically existed that in using Newspeak words one might remember their original meanings. In practice it was not difficult for any person well grounded in doublethink to avoid doing this, but within a couple of generations even the possibility of such a lapse would have vaished.

A person growing up with Newspeak as his sole language would no more know that equal had once had the secondary meaning of ‘politically equal’, or that free had once meant ‘intellectually free’, than for instance, a person who had never heard of chess would be aware of the secondary meanings attaching to queen and rook. There would be many crimes and errors which it would be beyond his power to commit, simply because they were nameless and therefore unimaginable. And it was to be foreseen that with the passage of time the distinguishing characteristics of Newspeak would become more and more pronounced — its words growing fewer and fewer, their meanings more and more rigid, and the chance of putting them to improper uses always diminishing.

When Oldspeak had been once and for all superseded, the last link with the past would have been severed. History had already been rewritten, but fragments of the literature of the past survived here and there, imperfectly censored, and so long as one retained one’s knowledge of Oldspeak it was possible to read them. In the future such fragments, even if they chanced to survive, would be unintelligible and untranslatable.

It was impossible to translate any passage of Oldspeak into Newspeak unless it either referred to some technical process or some very simple everyday action, or was already orthodox (goodthinkful would be the Newspeak expression) in tendency. In practice this meant that no book written before approximately 1960 could be translated as a whole. Pre-revolutionary literature could only be subjected to ideological translation — that is, alteration in sense as well as language. Take for example the well-known passage from the Declaration of Independence:

We hold these truths to be self-evident, that all men are created equal, that they are endowed by their creator with certain inalienable rights, that among these are life, liberty, and the pursuit of happiness. That to secure these rights, Governments are instituted among men, deriving their powers from the consent of the governed. That whenever any form of Government becomes destructive of those ends, it is the right of the People to alter or abolish it, and to institute new Government…

It would have been quite impossible to render this into Newspeak while keeping to the sense of the original. The nearest one could come to doing so would be to swallow the whole passage up in the single word crimethink. A full translation could only be an ideological translation, whereby Jefferson’s words would be changed into a panegyric on absolute government.

A good deal of the literature of the past was, indeed, already being transformed in this way. Considerations of prestige made it desirable to preserve the memory of certain historical figures, while at the same time bringing their achievements into line with the philosophy of Ingsoc. Various writers, such as Shakespeare, Milton, Swift, Byron, Dickens, and some others were therefore in process of translation: when the task had been completed, their original writings, with all else that survived of the literature of the past, would be destroyed.

These translations were a slow and difficult business, and it was not expected that they would be finished before the first or second decade of the twenty-first century. There were also large quantities of merely utilitarian literature — indispensable technical manuals, and the like — that had to be treated in the same way. It was chiefly in order to allow time for the preliminary work of translation that the final adoption of Newspeak had been fixed for so late a date as 2050.