McDonald’s “criminal” activities – Far too downmarket for the Sun newspaper

Jason Cook on his phone to the Sun newspaper

Author, film-maker and former criminal Jason Cook was in my back garden a couple of weekends ago, as a guest at Ariane Sherine’s marriage to Jeremy Corbyn – or, at least, the first day of a live action music video shoot for her Love Song to Jeremy Corbyn.

I had breakfast with Jason this morning and he told me the sad story of a mis-named McDonald’s Happy Meal.

On Sunday, he drove his son to a McDonald’s and bought him a Happy Meal, which comes with a free toy in the box.

Except that, after they drove off, his son asked: “Where’s the toy?”

There was not one inside the box.

Jason was going to shrug this off, then thought: No. They advertised a Happy Meal with a toy. My son deserves to get one and not be disappointed.

So they drove back.

“We bought a Happy Meal,” Jason told the McDonald’s girl, “but there was no toy inside.”

“But you didn’t tell me,” he said. “You advertise a Happy Meal with a toy inside. You’ve turned a Happy Meal into an Unhappy Meal for my son.”

“Do you want to talk to the manager?” the McDonald’s girl asked. 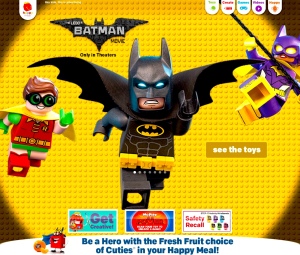 The delights dangled on the McDonald’s Happy Meal website

Again, Jason was going to shrug this off and go away but then, ever the dutiful father, he thought: No. They advertised a Happy Meal with a toy. They should have given me one.

So the manager came.

“We’ve run out,” the manager said.

“But,” Jason told him, “you advertise a Happy Meal with a toy inside and there wasn’t one. You’ve turned a Happy Meal into an Unhappy Meal for my son.”

“I think you’re making a mountain out of a molehill,” the manager told him.

“You advertised it,” Jason said.

Eventually, the manager grudgingly suggested: “You can come back tomorrow and get one.”

“But I live a fairly long drive away,” said Jason. “You’re telling me to drive all the way home and all the way back. I think I should have a refund.”

“Come back tomorrow,” the manager repeated.

When Jason told me this story, I suggested: “You should phone up The Sun newspaper. It’s a nice little story for them. McDonald’s Turns a Happy Meal Into An Unhappy Meal. They will pay you a finder’s fee for the story. You’re looking for £150,000 to complete your new movie’s budget. A tenner or £50 will help a bit. And McDonald’s must be breaching the Trade Descriptions Act and breaching Advertising Standards Authority rules by advertising a toy in the Happy Meal then not providing one.”

A McDonald’s Happy Meal box devoid of any toy

So Jason did phone up The Sun.

They told him: “It’s a bit too lowly for us. McDonald’s are forever not supplying toys in Happy Meals.”

Jason was once sentenced to four years in prison for being naughty.

He told me: “McDonald’s said they would give my son a toy with a Happy Meal and they didn’t. It’s criminal.”