Joe Wells is a political comedian. He has written for Have I Got News For You and performed as support act to Frankie Boyle and Alexei Sayle. 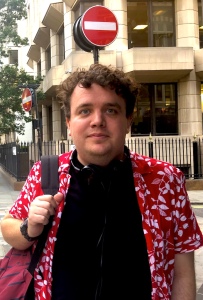 Joe Wells faces a bit of a career crisis…

His previous Edinburgh Fringe shows were Night of The Living Tories (2014), 10 Things I Hate About UKIP (2016) and I Hope I Die Before I Start Voting Conservative (2017).

But this August his show is entitled: Joe Wells Doesn’t Want to Do Political Comedy Anymore!

So that’s a bit of a career crisis.

Between the ages of 8 and 15, he suffered from Obsessive Compulsive Disorder. He overcame it with Cognitive Behavioural Therapy. When he was 15, he started writing about his experiences of OCD.

These writings went on to form the basis of his first book Touch and Go Joe.

JOHN: So… you have been doing previews of your new show before it hits Edinburgh…

JOE: Yes. In some of my previews, I’ve felt a bit self-conscious because, in part of the show, I am really quite earnest and I worry that is going to be a bit weird for the preview audiences. Though I know, in Edinburgh, they are going to be open to that. There is so much different stuff at the Edinburgh Fringe and people go there with such an open mind.

JOHN: Your show says what it’s about in the title: Joe Wells Doesn’t Want to Do Political Comedy Anymore! Anything else?

JOE: One of the things I would like the show to be is a sort of defence of Comedy because, from all sides, it feels like it’s trendy to slag off Comedy. From the Left, people are saying Comedy is bullying and horrible. From the Right, they say Comedy has become too PC and comedians are just saying what people want to hear.

I don’t think either of those things is true.

Comedy is great because it puts viewpoints in front of people who wouldn’t otherwise hear those viewpoints. That is what the Left should be striving for: getting people to hear from voices they don’t often hear.

But the Left has become quite insular: Let’s just talk amongst ourselves.

JOE: I want there to be Right Wing people in my audience so I can put forward my ideas of how I want the world to be. Why wouldn’t I want that?

JOHN: There is this idea that defining politics as Left or Right is wrong. It’s just an accident of history – the way they sat in the French National Assembly. Thinking about Left and Right is misleading – it’s not a straight line: it’s a circle. If you take Left and Right to their extreme extremes, they both end up in the same place. A more sensible division might be Authoritarian and Libertarian.

JOE: But then, again, that becomes full circle. I want us to have a Welfare State; I want us to have… things which some people would see as Authoritarian. I think… yeah… I dunno. I don’t really know what I’m talking about. The thing is comedians do not really know what they are talking about. I think that’s partly why I don’t want to do political stuff any more. I mean, I’m not a political theorist.

JOHN: But you do want to put your views out there, like all comedians… And all comedians are misfits. Different. If they were more like everyone else, then they wouldn’t be interesting to listen to. It’s because they can come up with a bizarre, unexpected angle – a different viewpoint on something. Michael McIntyre is arguably the most successful stand-up in Britain at the moment. And he is telling ordinary people about things they see every day – nothing new – but they haven’t seen those things from his viewpoint before.

JOE: I think he’s great, though I’m not queueing up to buy tickets. His routine about the bus stop is just a powerfully-written routine. Yes, to some extent, you have to be on the outside looking in.

JOHN: In a sense, if you do not have a character defect, maybe you cannot be a good comedian. 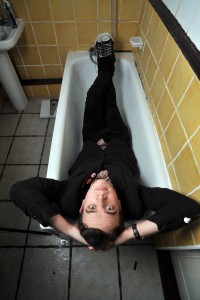 Joe Wells manages to fit into a bath…

JOE: I can’t think of many comedians who really properly ‘fit in’.

But, outside of comedy, I do know loads of people who I think do fit it. They know where they belong in things. Even though there are comedians who take their kids to school and lead a ‘normal’ life, they’re still a little bit… not so normal.

JOHN: Why did doing specifically political comedy attract you?

JOE: I talk about it in the show… I was an angry young man and a lot of that anger came from stuff that was not to do with politics. But at 18 or 19 I would go on protests – and shouting and being a political comedian and rallying against things was incredibly cathartic.

I am still a big Leftie and there’s still lots of injustices and things I want to change, but I’ve realised that the reason I fitted so neatly into being an angry political comedian was because I got to feel OK about being angry.

I have felt angry a lot of my life.

JOE: Well the show has a ‘reveal’ – about whether or not I am autistic. I was assessed for autism in February this year. The reveal is whether they said I am… or not.

“Why don’t these kids at school want to be my friends?” (Photograph by Ed Moore)

I did have those traits and I was different. I could not make friends and I didn’t fit in. I thought: Why can’t I fit in here at school? I feel I’m nice and I feel I’m a kind person. So why don’t these kids at school want to be my friends?

I think that informed a lot of my life growing up. I don’t have many male friends. Most of my good friends are women. I would go to parties and see all the men would talk together. They’ve got some jigsaw pieces where they fit together and it works. There was something that was not working with me.

I have always had a real chip on my shoulder about football. I hated football fans.

But then I realised what it is is that my dad used to take me to football and it was so noisy. I hated all that shouting and noise. I found it overwhelming and horrible and I felt angry with the people making that noise. And, in my head, I created a story about that – Football fans are horrible!

But now I know lots of people who are into football and that’s fine… It’s not football fans I hate – It’s that noise. But I felt the anger and had to come up with a reason for why I felt that anger.

People need a narrative around why they feel a certain way and, if there’s no narrative…

One of the things I talk about in the show is that, in Comedy, everyone has their say.

I would argue that Comedy is more neurodiverse than any other…

JOHN: Neurodiverse? What does that mean?

JOE: People think differently. There’s a book NeuroTribes by Steve Silberman. The basic idea is we have bio-diversity and different animals all play their role. You need all those animals. They are different – you can’t compare a fish and a cat – but they all co-exist and are necessary. Same with cultural diversity.

And we also have neuro-diversity. Some people are more on the autistic side; others are good at social things and are very good at connecting to people emotionally; it’s all part of diversity.

The old way of looking at things is that there is this ‘good way’ of being and thinking, but actually the best way is for everyone to think and view things differently.

A lot of comics think about things differently and come at things from different angles and that’s part of how you write comedy – looking at things in a different way.