A comedian’s blood, the Lady Gaga of comedy and Monty Python with chips 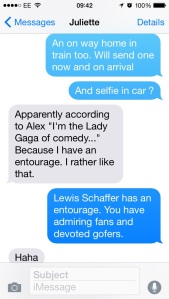 So, last night, I was getting a train from my home in Borehamwood to see Joel Sanders’ Angry Boater show by the Grand Union Canal in Haggerston, when I got a text from Juliette Burton.

“Driving past Borehamwood,” it said, “on my way to Putney to do a 5 minute gig after recording a Mills & Boon audiobook all day for the RNIB.”

Joel’s show started off slightly weird. Well, the show had not even started.

He sat at a table and, when the last member of the full-house, pre-booked audience walked through the door, asked her to help him. He then took a blood pressure reading. She was his witness.

His blood pressure was apparently very high. His show is about being angry and living on canal boats.

Joel Sanders – The Angry Boater – through the porthole

I have to say his hugely enjoyable show was very calmly – even gently – presented. It climaxed with the true and ongoing story of how the engine of his canal boat has been buggered. A new one may cost him £8,000.

Afterwards, I asked him about his show at this year’s Edinburgh Fringe in August.

“Fringe?” he replied. “Everyone assumes I will be at the Fringe! I did it in 2011 and found it a miserable period so I don’t have any plans to return – at least not this year.”

He is a very busy man for someone concerned with his high blood pressure and general health. He recently interviewed Jim Davidson and Matt Lucas on-stage at Bethnal Green’s Backyard Comedy Club and, tonight, he is interviewing Harry Hill there.

“My next thing,” he told me, “once I get the engine sorted, is to take the Angry Boater show up the canal and set up impromptu shows in the nether. Wherever I moor up, I’ll find a venue, spend a week promoting it, do the show, move on and repeat. I want to be P.T. Barnum on a boat. Show up in villages and small towns – places with very little entertainment – and try to create some hype. It has got to be easier than London.” 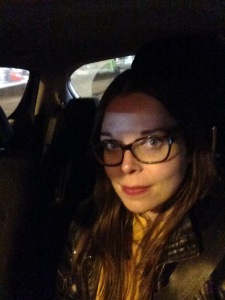 After that, I got a train home to Borehamwood and, on the way, had a text message conversation with Juliette Burton about how her gig had gone. she is the queen of complex 60-minute multi-media reportage shows, so I thought 5 minutes must ironically have been very difficult.

“Well,” she told me, “my 5 mins tonight was very interesting. Alex Martini, the lovely MC, greeted me saying he was a huge fan thanks to your blog and then bigged me up massively before bringing me on stage. I had been told a strict 5 minutes, but then I was told 10-15 minutes cos I was such a ‘big name’.

“I was incredibly flattered but really wasn’t sure my added-on material deserved the praise. According to Alex, I am ‘the Lady Gaga of comedy’ because I have an entourage. I rather like that. But I did turn up at the gig totally alone. And my dress wasn’t made of luncheon meat, sadly.”

In the British circuit comedy, it has to be said, only Lewis Schaffer has an entourage. Everyone else only has fans.

“I honestly don’t know how I went,” Juliette told me. “My ad libs got more laughs than anything. I spouted some stuff about recording the Mills & Boon book today, which they seemed to like.

“They laughed at me saying I had been sectioned under the Mental Health Act as a teenager and, the more I insisted it was not a joke, the more they laughed. Weird. Alex said he was heartbroken to learn I had a boyfriend.”

“I have never,” replied Juliette, “said the words ‘nubbin’ and ‘thickness’ so much in one day.”

I remain mystified by nubbin but, by then, Malcolm Hardee Comedy Awards judge and Scotsman comedy reviewer Claire Smith had started texting me from the South Coast, where the Brighton Fringe is in full swing.

“Tonight,” her first text said, “was the official opening of Lynn Ruth Miller’s art exhibition at Bardsley’s of Baker Street – which is one of Brighton’s oldest fish and chip shops.”

Lynn Ruth Miller, now aged 81, has one of the youngest minds on the UK comedy circuit.

“As well as showing Lynn Ruth’s paintings,” Claire told me, “the chip shop is also the permanent home of the Max Miller Society’s collection. There is a little room at the back where you can eat your fish and chip dinner surrounded by posters of the ‘Cheeky Chappie’ and cards with his jokes. They also have one of his floral suits in a glass case.”

“This,” I asked, “was a grand opening for Lynn Ruth’s art exhibition? Who was there?”

“The first to turn up,” Claire told me, “was Carol Cleveland from Monty Python’s Flying Circus.  She told me she loved taking part in the Monty Python reunion shows at the O2 because one of the best things for her was that she finally got to act. As well as doing the dolly bird stuff she also got to play a couple of roles that used to be played by Graham Chapman in drag.”

“Busier than ever,” Claire texted. “I’ve seen her in two shows at the Fringe. Not Dead Yet – which is a musical version of her life story – and Eighty! – which is a show about growing old and continuing to have lots of fun. Last night turned into another of her chip shop salons – with a huge group of friends and admirers eating at a giant table as Lynn Ruth held court.”

“Kate Copstick,” I texted back, “was telling me she might go down to Brighton just to see Lynn Ruth in the fish and chip shop. I could be persuaded too.”

“I’m not sure if there is a programme for these,” explained Claire, “or if they just happen when Lynn Ruth decides to do it. But I am sure if La Copstick were in town a salon would spontaneously arise.”