Is this an average Canadian family? Stripper, conservator, Reverend, shrink. 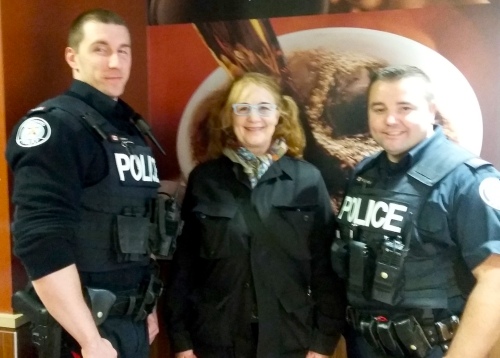 My occasional Canadian correspondent Anna Smith with two policemen in Toronto. I’ve no idea why

She is this blog’s occasional Canadian correspondent.

Yesterday, I got an email from her. It read:

My Dad has started a blog and my sister the priest got arrested… again!

Instead, I got this message from her father, Jaime Smith: 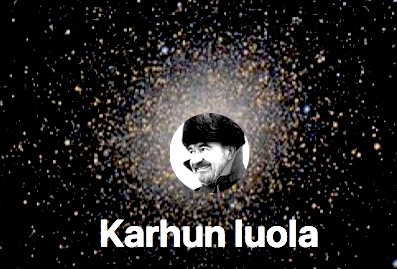 I am the father of three daughters all born in Argentina where I was stateless, having renounced US nationality before we emigrated to Canada.

I was born in the US, but left because of conscription in the interval of ‘peace’  between the Korean & Vietnam wars. I renounced my US citizenship, changed my name, became a naturalized Argentine citizen, travelled back to university in the US as a ‘native-born foreign student’ then left a second time for Canada to teach astronomy & physics, became naturalized again as Canadian (but kept the Argentine passport just in case…). Then I went to medical school and specialty training in psychiatry. Some say I had a colourful life and encouraged me to write about it, hence the autobiography and bloggery.

I went to Argentina because I had a job offer there photographing faint blue stars at the Córdoba Astronomical Observatory. This was paid by a grant from the Office of Naval Research, so my emigration to Argentina was actually sponsored by the US military.

Anna, my eldest daughter, you know as she occasionally contributes to your blog. A retired stripper (London, Belgium, Finland, Malaysia) she lives on a boat on the Fraser River and does volunteer public health work with street ladies in Vancoocoo. That’s Vancouver.

I had a patient when I was working as a shrink in Vancouver who told me that he met Richard Bonynge (ex-impresario of Vancouver Opera) in Rome, who used the term Vancoocoo, being displeased with his being terminated there for mounting experimental and rare operas that didn’t bring in the punters and their money. After they fired him, the next season they went back to full house productions of La Traviata, La Bohème and Carmen – guaranteed old warhorses. I thought the term Vancoocoo appropriate.  That’s where I trained in psychiatry after medical school.

Kjerstin, my middle daughter, is a textile conservator at the Royal British Columbia Museum in Victoria. She has a PhD in mending from London – Hampton Court Palace etc. She is going to a conference on mummies in Tenerife later this month, where she will give talk on gopher hide robes covering frozen corpses. 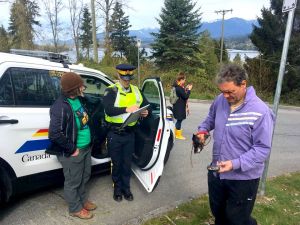 In Canada, the New West Record reported Rev. Emilie Smith’s arrest earlier this week. She had joined other religious leaders to block a company’s gates in solidarity with Indigenous Peoples who object to the Kinder Morgan Pipeline Expansion

Emilie, my youngest daughter, is the vicar of St. Barnabas Anglican Church in New Westminster, a Vancoocoo suburb. She is socially conscious to the extreme, gets arrested at demonstrations, went through three unsatisfactory husbands and is now getting married to her lesbian partner in July.

I also have 6.5 grandsons (the 0.5 is biologically female but currently growing a moustache and transitioning to male. Plays rugby football.)  I also have two great-grandchildren – one male and the other female.

Well, they are at this time anyway.

My daughters’ mum died in 2011 – we had been married 55 years. Now I have a gay younger Chinese boyfriend who inspired me to learn about his language.

I first trained in philosophy (BA), then astronomy (MS), then medicine (MD) and finally psychiatry (FRSM). I studied languages (Mandarin and Finnish) at the University of Victoria in British Columbia after I retired from practice.

I have become interested in non Indo-European languages and translated a Finnish detective story into English.

I studied Finnish because my maternal grandparents were from there in the late 19th century before it became an independent country in 1917. It had previously been known as the Grand Duchy of Finland and belonged to Russia. I already knew Latin and the Romance, Germanic, Scandinavian and a bit of Slavic languages and wanted to try something completely different.

When I awaken early and desire to go back to sleep, I usually do mental arithmetic in a language other than English – like Spanish, German, Finnish or Mandarin Chinese. Should that not work I may get up and have a cup of hot chocolate and a cookie or just reflect on some activity or idea of particular interest to me. 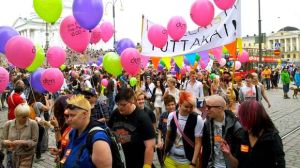 The 2013 Gay Pride march in Helsinki (Image by Yle Uutiset)

They have great trams in Helsinki – I carried a Canadian flag in the gay pride parade there in 2013. I was leaving Helsinki the same day in July once as Mr Methane, the UK farteur you occasionally write about, but I smelled nothing in the airport.

I wrote a 68 page autobiography earlier this year – only the bare bones of 1933-2017, no more than one page per year and a few even more compressed. After that, I decided to continue writing and settled on the blogosphere after reading your postings.

So this is your fault, but I am having fun with it. During my 30 year career as a clinical psychiatrist I wrote and published professional articles and book reviews in medical and other journals.

When in stateless exile in Argentina, in the mid 1950s, I worked as a journalist for United Press. I wrote articles on diverse issues such as international commerce and the quality of the race track as seen by Formula One driver Stirling Moss.

I have been churning out 500 words daily since I started my blog 10 days ago. The focus is loosely on books and other literary topics.

You can read my daily drivel, if you are interested, at https://karhunluola.com.

Strictly speaking, the grammatically correct expression would  be ‘karhunluolasta’,  literally meaning ‘from the cave of the bear’.

Watch out for woozles. 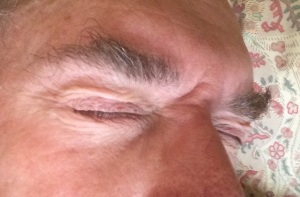 A selfie taken by myself while asleep but not while dreaming

I am someone who remembers his dreams only rarely. This morning, I remembered a detail from last night.

I was with a group of people and went ahead to check-out or to book a restaurant.

The restaurant was crowded and, at the entrance, there was a piece of paper lying on a table with a partially completed painting of an ape’s face. A man then drew a single line top-to-bottom on the uncompleted face of the ape to create a nose which comprised both a left and right side.

Before this (in my dream) I had been to another restaurant where another man had been creating a painting of something else. I do not remember what. I am not sure I even knew in my dream.

I have no idea where either of these dreams came from.

In what passed for reality last night, in crowded pre-christmas London, a traditional Christmas-card stage coach pulled by two horses passed me in Charing Cross Road, near Leicester Square. Further down, a small Cinderella type spherical coach pulled by two horses was passing the National Portrait Gallery. Round the corner, inside the National Gallery there were no pictures of apes and no-one was painting.

Afterwards, my eternally-un-named friend and I went to see the play King Charles III at Wyndham’s Theatre. Lovely theatre. 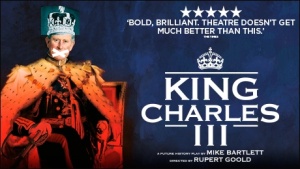 The play is plotted around some future time when the Queen dies and Prince Charles becomes king.

Though, in fact, I seem to remember Prince Charles saying years ago that he would take the title King George VII when he ascended the throne, presumably because King Charleses have a dodgy pedigree – the first had his head chopped off and the second hobnobbed with female orange-sellers. The recent Georges (well, V to VI – let’s ignore I to IV) have a solid, dependable feel to them.

The play had a good enough plot with a good enough ending but it was utterly ruined by the fact it had been decided to write all the dialogue of this future fantasy in pseudo Elizabethan blank verse interspersed with modern-day slang. I am sure this affectation was bullshitted as something deeply intellectual and meaningful and possibly even looked good on paper, but it scuppered both credibility and my will to live. 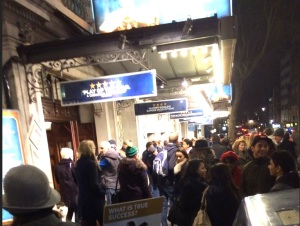 After this, at London Bridge station, in a crowded corridor, we passed a man with bulls horns on his head. A few minutes later, in a totally different corridor, a man was trying to run through the crowd dressed as a matador.

The two men appeared to have no connection.

When I got home, there was an e-mail from mad inventor & Malcolm Hardee Comedy Award designer John Ward telling me that he was now Chairman and Minister For Inventions of The Eccentric Party. He signed himself ‘The Most Honarabble Sir Dusty Wells-Fargo’. This hints, I think, that it is unwise to live in Lincolnshire.

Although Vancouver must run it a pretty close race.

Because I also had an e-mail from this blog’s occasional Canadian correspondent Anna Smith. I have no explanation for her reference to a spaniel. Nor for much else. Her e-mail reads: 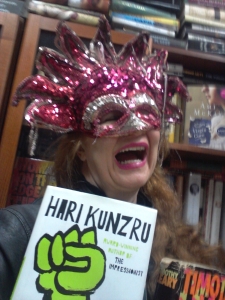 I know a couple of feral puppies just flown in from Santiago de Chile to the suburban wilds of Surrey, British Columbia. One is male, one female (in case the spaniel is gay) but they won’t be old enough to marry for a while.

I saw two different men on Davie Street who were wearing long tails: one looked like a rope, the other a rainbow-coloured horse tail.

In the library, the kid at the computer next to mine was rolling a huge joint.

The librarians no longer have desks. They roam around and are difficult to locate but there is a phone from which they can be summoned. There are wicker baskets full of condoms and lube on the shelves and still a few books.

There is a lot of swearing, with people screaming “Fuck! Fuck! Fuck!” at their computer screens and fights break out with monotonous regularity. Everyone is used to this. They glance up to be sure it is not escalating towards them and return to their screens.

The provincial government is very smug because they just spent millions of dollars to increase the mental hospital capacity by fourteen beds.

Out in the rain, I talked with a broken-looking older man trying – without success – to sell calendars for charity. I asked him what he was going to do for Christmas and he said he was going to stay home and do ecstasy.

Earlier in the day, a couple of gay Jehovah’s Witnesses stopped to talk to me. They said they could show me how I could live for a thousand years.

“But I don’t want to live for a thousand years,” I told them.

“But I’m not afraid of dying,” I told them. “I have died so many times. It was not scary at all. It was totally relaxing. All the things you worry about like the water bill you don’t care any more. I did not go through a tunnel or see lights or anything and, when I came back, I was happy.”

They looked relieved… What I said to them about dying not being unpleasant really seemed to cheer them up and they walked away happily of their own accord and went across the street into a cafe to take a  break from the witnessing.

Perhaps I am missing nothing by seldom remembering my dreams.

Life can be surreal enough.