Did a Chinaman, an American and a Russian cause all this Brexit chaos?

Am I being totally paranoid about what is happening in UK and US politics?

The Walt Disney company famously used to give copies of Chinese strategist Sun Tzu’s 5th century BC military treatise The Art of War to its executives as a guide on how to survive and triumph in the corporate environment. As a result, the book became almost essential reading in Hollywood.

One of the central points made in The Art of War – which, admittedly, I have not read for a good few years – is that the object of war is not to destroy your enemy.

It is to either take control of your enemy’s assets or to undermine your enemy internally to such an extent that they are no longer able to threaten or compete with you.

I do wonder if Russia’s Vladimir Putin has read The Art of War.

In the US, we have a country divided by the election of Donald Trump, where large sections of the population vehemently disagree with the result of that public election, with trust in political leaders diminished and democracy undermined.

In the U.K, we have a country divided by the Brexit vote, where large sections of the population vehemently disagree with the result of that public vote, with trust in political leaders diminished and democracy undermined.

I feel a bout of paranoia drifting over me, tinged with some political admiration. Divide and conquer?

Perhaps I should not even mention the Scottish Referendum result and reactions to it within Scotland. Russia’s Sputnik News Agency, strangely based in Edinburgh, already has the slogan: Telling The Untold.

Am I being totally paranoid?

“May you live in interesting times” is, of course, not an encouraging, aspirational quote but a Chinese curse.

I usually keep away from overt politics in this blog so, no doubt, I will regret posting this one… 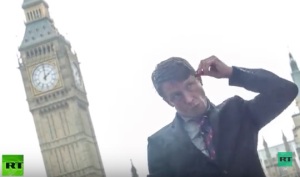 A comedian I know was recently asked about the possibility of appearing in the UK-produced comedy series which Russian TV station RT  is apparently planning to screen next year. He said he would not appear on RT, which is financed by the Russian government. I think he was wrong. All publicity is good publicity and, if he is allowed control over his own material, I see no real problem.

But why RT, the former Russia Today – a current affairs channel akin to the BBC News channel – should be thinking of screening a comedy show is interesting.

I was also told that RT is especially interested in screening Right Wing satirists who find it tough to get on UK TV.

Why would RT be interested in Right Wing not Left Wing comedians?

Well, presumably for the same reason that, allegedly, the Russian state set up hundreds of Facebook accounts promoting Right Wing rallies supporting Donald Trump during the US Presidential elections. 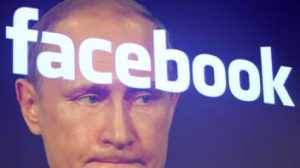 I was in TV promotions and marketing for 25-ish years and have always been interested in techniques of persuasion and how to sway beliefs and perceptions.

As well as in marketing, that is actually what Art does too: you try to take the audience – whether viewers, listeners or fiction readers – along with you.

Which is also relevant to the art of war in the 21st century.

Sun Tzu says in his influential book The Art of War that “the supreme art of war is to subdue the enemy without fighting” because the object of war should be not to destroy your enemy’s assets and power structure but to take them over intact.

Undermining their strength and influence is equivalent to increasing your own.

Lest we forget, the reason Sun Tzu’s The Art of War (written in the 5th century BC) came back to prominence in the mid-1990s was that Disney company president Mike Ovitz recommended it or (in some versions of the story) allegedly gave copies to all his Hollywood executives as a training manual for navigating the corporate world. It was said that the only two books you needed to read to succeed in corporate politics were Machiavelli’s The Prince and Sun Tzu’s The Art of War.

Sun Tzu’s view in the 5th century BC

Two of Sun Tzu’s oft-quoted and closely-linked insights include:

“You have to believe in yourself”
and
“The opportunity to secure ourselves against defeat lies in our own hands, but the opportunity of defeating the enemy is provided by the enemy himself.”

In the modern world, corporations are – it could be argued – equivalent to non-geographically specific states.

You do not need to fully take over a company to influence its direction. A large shareholding will give you a voice – or being able to influence the main shareholders may suffice.

There is no point only targeting the fans of your product, although you do have to remind them your product exists.

The important thing is the target (Photo: Christian Gidlöf)

Your aim is to sell a ‘belief’ in your product to people who are not yet convinced or who are actually actively resistant and opposed to your product. Or – and this is the point – you can undermine their existing beliefs in the product they currently buy, which will increase the comparative impact of your own product.

If that product is a political system, then you do not even have to convince your opponents that your beliefs are right. By undermining their confidence in their own political system, you can strengthen your own comparative position.

If you were to bizarrely and possibly unwisely transfer this to the situation of a stand-up comedy show featuring only two comics then, if you undermine the audience’s belief and confidence in one comic, you increase their (comparative) belief in the other comic. The MC can do this in his/her introduction of the other comic to the audience. Or one comic can undermine the other’s self-belief and thus performance.

In the case of the US, let us just imagine for a moment that the Russians wanted to install Donald Trump because they believed he would be more receptive to their overtures, reduce or remove economic sanctions related to Ukraine etc etc…

Well, they must be very disappointed because he has proved to be a rogue player.

It is a bit like the Kray Twins springing ‘Mad Axeman’ Frank Mitchell from Dartmoor Prison in the 1960s and then finding that he actually was uncontrollably mad.

US cartoonist Ben Garrison’s view of the Washington ‘Swamp’

But – swings and roundabouts – Trump’s appeal is to Right Wing voters in the US and his constant harping-on about how the Washington Establishment and the ‘Fake News’ media are corrupt must relentlessly and effectively chip-chip-chip away at his loyal Right Wing voters’ belief in their own system.

That is something that no Left Wing politician could ever do.

If you undermine a building, it will collapse.

As for my comedian chum, I think he was wrong to refuse to appear on RT.

If they give him an unfettered, uncensored voice which he cannot get onto UK TV then, in terms of Art, that is a ‘win’ situation for him.

The fact that the financiers of RT may see comedy on existing British society as a way of undermining belief in the current system and appealing to the always-malleable 18-35 year old age group while appearing to be the voice of individual freedom of expression is a side issue.

Morality was never a necessity in Art.

And, of course, abroad, many took individually-seen videos of fake reporter Jonathan Pie as those of a real reporter whose off-camera personal views had been caught between recordings, thus showing the duplicity of Western reporting.