The Malcolm Hardee Awards and after – President Obonjo to buy Greenland? 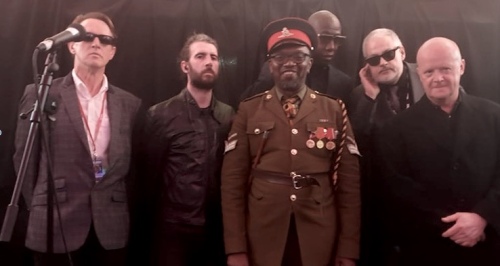 I am in London.

The Edinburgh Fringe is, as tradition dictates, in Edinburgh.

Up in Edinburgh, the 2019 Malcolm Hardee Awards were announced and presented last night – well, this morning, because the anarchy started at midnight – in the Ballroom of The Counting House during the traditional 2-hour stage show.

The winners were – indeed still are – 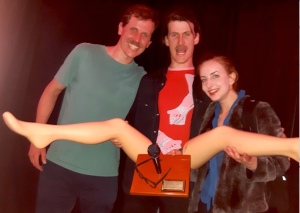 Legs display their Malcolm Hardee Award to its best advantage

ACT MOST LIKELY TO MAKE A MILLION QUID
President Obonjo

The Awards were classier and glitzier than in previous years because, I hear, the judges were supplied with chips during their deliberations. That never happened in previous years when dry and occasionally stale biscuits were sometimes, but not always, provided.

For American readers: ‘chips’ are French fries. (Sometimes I think George III did us a favour by getting rid of the Colonies.)

President Obonjo, who was also compering the show, arrived with a group of threatening-looking bodyguards. They remained throughout the night and ushered him on-and-off stage in case the deeply-dodgy BBC Studios or E4/Channel 4 had any pickpockets or muggers working in the vicinity. 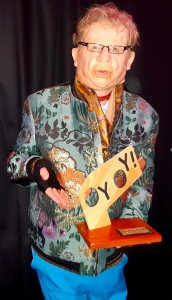 Fellow Award-winner ‘West End Producer’ arrived in his mask, wore it throughout and left in it so Mysterious Mark – organiser of the Awards on behalf of the British Comedy Guide – tells me: “We still don’t actually know who he is.”

Some of the full-house audience apparently walked out after a time, reportedly confused by the bizarreness of the acts: Tom Crosbie, Lucy Hopkins, Legs, Dragos Montenescu, Mandy Muden, Charles Quarterman, Scratch & Sniff and Twonkey.

According to judge Claire Smith, the walkouts were by a few slightly dazed people with startled looks in their eyes.

Fellow judge Kate Copstick confirmed the problem was a new Fringe app which tells people what shows are about to start nearby with the result that people turn up not knowing what the show actually is, just that it’s free.

The result last night, says Copstick was that “we got some young, slightly drunk people who mostly walked out during Twonkey’s performance”.

2016 Malcolm Hardee Award winner Twonkey apparently displayed a jaw-dropping excess of surrealism and, at one point, got thoroughly entangled in the leads of three microphones. It is unclear why he actually needed to have three microphones.

Someone who was in the audience last night tells me, though, that Twonkey managed to ignore the drunks and “pulled it around again, finishing with a blistering performance of Goat Girl – his song about a girl on a skiing holiday on ecstasy…” 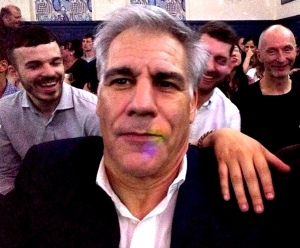 The audience contained a large smattering of other comedians including Lewis Schaffer, who may or may not have diabetes (his Fringe show is called Mr Diabetes) and who has been living for months on a diet which excludes all fruit & vegetables but includes lots of meat, some of it raw.

Claire Smith tells me: “He looks great. He has lost a lot of weight, which is good, but his breath smells horrible.”

Apparently, he has been seen around Edinburgh recently wearing a badge saying: YES, I KNOW MY BREATH STINKS.

This is, she tells me, partly because he now believes that eating no fruit or vegetables means he no longer needs to brush his teeth.

“I keep stumbling on him in Edinburgh,” Claire told me today, “crying in underpasses because he has accidentally eaten an avocado.”

Claire today also attended the other, less increasingly prestigious, comedy awards – Dave’s Edinburgh Comedy Awards – where, she reports, significant numbers of half-starved young comedians were to be seen absconding with armfuls of the free croissants. (Dave’s sponsored Comedy Awards has a higher budget than the unsponsored Malcolm Hardee Awards). 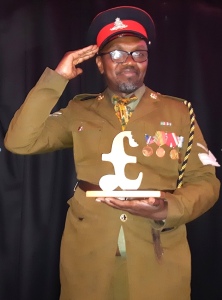 In later developments, President Obonjo announced he was thinking of putting in a bid to the Danish government to buy Greenland now that Donald Trump is out of the running…

And the BBC posted an online link to their World Service’s Focus on Africa which acknowledged that President Obonjo was “one of the few African comedy acts well known on the UK comedy circuit” (and, indeed, for the last ten years, the ONLY deposed African President/leader character on the UK comedy circuit)… which makes the self-proclaimed ignorance of the apparent Intellectual Property thieves at BBC Studios/E4/Channel 4 even more spectacularly jaw-dropping…

BBC Studios and E4/Channel 4 had originally been shortlisted for the Malcolm Hardee Cunning Stunt Award “for exponentially increasing the knowledge of, and sales for, President Obonjo with their ‘appalling theft of his character'”… but, on the night, they were trounced byWest End Producer –  a man in a rubber mask. 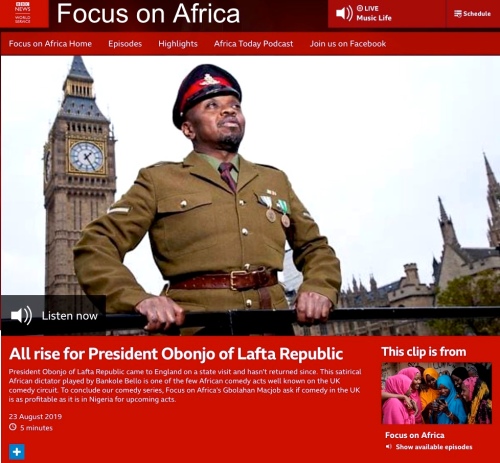