World War I, Cambodia and beheadings 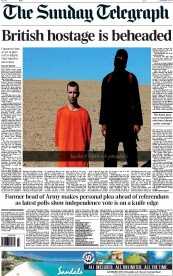 I am posting my blog a little late today because, this morning and lunchtime, I went to the Imperial War Museum in London where, amongst other marketing matters, they were discussing reaction to the design of their new First World War exhibition area.

When they beheaded the second American journalist, Steven Sotloff, a couple of weeks ago, my eternally-un-named friend and I discussed whether or not, if you were the family of the victim, you would want to – almost feel compelled to – watch the video of the beheading. I think we both came to the conclusion that we probably would.

I have no urge of any kind to see the beheading of any of these (so far three) victims.

But, for some reason, if I were a brother or father or son, I think I would want to see.

It makes no logical sense. It would have no good, positive effect. It would merely traumatise you with those images for the rest of your life. But there is, I suspect, some inexplicable human urge to experience the last seconds of your brother or husband or father or son. 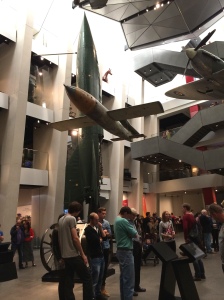 The new Imperial War Museum exhibition on the First World War manages an excellent balance between facts and people. It is a big exhibition. I had 50 minutes to skim through it. But, to see it  properly might take three or four hours.

Strangely, the two things I will remember most are a film where not much happened – it was just German prisoners and British soldiers filing past a camera – but you could see all the faces and eyes of those now long-dead people…

Nothing to do with the War, but it put it into context. It made that world come alive to me. 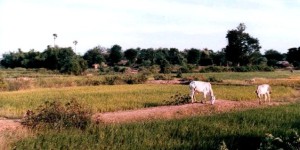 The killing fields outside Phnom Penh in Cambodia in 1989

At the killing fields in 1989, you could see the outlines of the mass grave pits of 10 or 15 years before and, here and there, little shreds of shirts and slivers of human bones which had splintered off when skulls and hands and bodies had been smashed.

There were glass pagodas of skulls. But the slivers of bone and the glass pagodas were less horrifying than the small entrance hall to Tuol Sleng where the walls were covered with faces.

These people were at Tuol Sleng long ago

With Germanic efficiency, the Khmer Rouge had photographed their victims before they were taken to the killing fields. Photographs of their faces, as if they were passport photos for death.

All the men and women photographed knew they were going to die.

They knew they were going to die and soon.

They all had that same look in their eyes: a distant, empty stare without hope.

As I had no time to write a ‘proper’ blog this morning, I looked to see what the BBC had reported happening on this day in previous years… 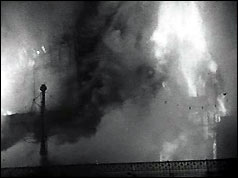 Water from the past

Three hundred people have been rescued after being cut off by a blaze on the world’s longest pleasure pier on England’s south-east coast.

The visitors became stranded when a large wooden pavilion at the shore end of the pier caught fire in the early evening.

The pavilion, which is used for holding conferences and other functions, was empty at the time.

Most of the trapped people had been at the far end of the pier when the blaze started.

They had to walk most of the nearly 1.5 miles (2.4 kilometres) back because the electricity to the pier’s railway had been cut off.

However, they were not able to pass the burning pavilion and had to complete the journey by climbing down the pier structure and boarding boats to shore.

Firefighters from surrounding districts joined those in Southend to help put out the flames.

They were watched by a large crowd on the sea front – many of whom had come to see the pier’s famous illuminations. 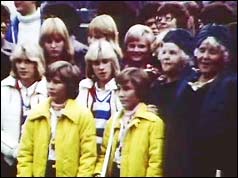 Ninety sets of Swedish identical twins have travelled to Felixstowe for a brief shopping trip.

The twins are taking part in studies by researchers from the Karolinska Institutet in Stockholm.

The scientists are investigating links between the environment and human behaviour.

But participants are viewing the excursion as a form of light relief. As one twin put it, they have come across “just for fun”.

As the twins disembarked from their ship, the Tor Scandinavia, each pair was confusingly dressed in matching outfits.

It is hoped the sets of siblings might find something different to wear when they spend their money in the local shops and boutiques. 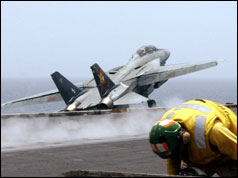 The United States has begun its military campaign, Operation Enduring Freedom, against al-Qaeda and the Taleban in Afghanistan.

Cruise missiles and bombers have targeted the airports of Kandahar and Kabul and terrorist training camps near Jalalabad.

The attacks which began around 1630 GMT were quickly followed by a public broadcast from President Bush who promised a “sustained and relentless” campaign.

The Taleban has condemned the strikes and says it shot down a plane, a claim denied by the Americans.

Up to 50 cruise missiles are reported to have been launched from submarines in the Arabian Sea.

The US also flew in B52 bombers stationed on the island of Diego Garcia, and B2 Stealth bombers direct from the US itself.

Tony Blair confirmed the initial strikes involved a British contribution by HMS Illustrious and a small number of submarines.

They form part of a US-British naval coalition gathered in the region within striking distance of Afghanistan, including two US aircraft carriers.

But the Pentagon says it will be mounting operations from the air and the ground, and defence experts say special forces are likely to be used soon into the campaign. 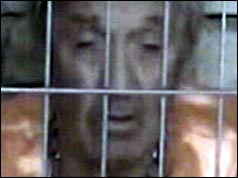 Fears are growing that the British hostage, Kenneth Bigley, abducted three weeks ago in Iraq, has been murdered by his captors.

Engineer Mr Bigley, 62, and two Americans with whom he shared a house in the wealthy al-Mansour district of Baghdad, were captured on 16 September by the Islamist Tawhid and Jihad group.

His fellow contractors Eugene “Jack” Armstrong and Jack Hensley were beheaded on 20 and 21 September, when their kidnappers’ demands for the release of Iraqi women prisoners were not met.

The United States is holding two Iraqi female weapons scientists, Rihab Rashid Taha and Huda Salih Mahdi Ammash, but says it has no plans to release them.

Efforts to secure Mr Bigley’s release have been stepped up in the past few days.

Libya’s Colonel Gaddafi and Sinn Fein’s Gerry Adams have appealed to his kidnappers on behalf of the family.