This afternoon, I was at comic James Harris’ wedding party in Hackney. He got married yesterday to Ke Zuo.

I was sitting talking to Hannah George and to Toby Williams, the comic who used to perform as character Dr George Ryegold. I was suggesting to them that, when the inevitable movie of the sudden downfall of film producer Harvey Weinstein is made, Lewis Schaffer should play the part of Weinstein.

Imagine my surprise then, dear reader, when my left nipple began to be tickled by the vibrations of an incoming text message on my iPhone.

The message was from a comedy promoter. It said:

And why do you keep saying Lewis Schaffer’s name in vain interspersed with Harvey Weinstein?

The iPhone in my shirt’s breast pocket must have phoned the comedy promoter of its own accord by pressing itself against my erect nipple… Yes, the party was that exciting.

I sent a message back. It said:

I put the phone back in my breast pocket.

A little later, it tickled my nipple again.

It was a text message from comic Janey Godley, in Aberdeen to perform two shows with Scotland’s former First Minister Alex Salmond. It said:

John did you leave a message?

I had not phoned her. But her iPhone told her I had left a 10 second audio message on her phone. 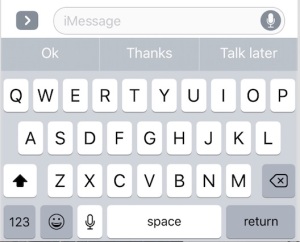 Mysterious cyberspace keyboard not sent by me to Aberdeen

And I also seemed to have sent her a photograph of a keyboard.

A little later, I got an email from comic Becky Fury, the winner of last year’s Malcolm Hardee Cunning Stunt Award who has taken to calling herself a double Malcolm Hardee Award winner because of a dubious event in a London pub. 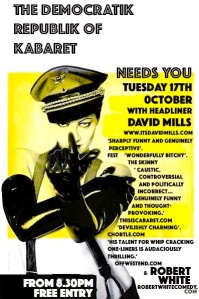 Becky’s email was inviting me on Tuesday to a new weekly show she is organising in Victoria Park, London. The show is called the Demokratik Republik of Kabaret but she has inexplicably abbreviated that not to DRK but to DPRK, the abbreviation for North Korea.

As the weekly comedy night is new, she wants acts who want to perform to get in touch with her.

Anyone who wants to come down and try new or experimental material in a lovely venue please email Demokratik Republik of Kabaret with a submission – PeoplesCabaret@gmail.com

Becky Fury – a woman in search of the bizarre and original

I am not a performer so I think Becky assumed I would not be interested in this message and that is why she included a story for me.

To hold my attention.

I do to know if the story is true or not.

I seem to live in a world in which comics pretend to be doctors. Or not.

And English character actors pretend to be Jewish New York comics. Or not.

And iPhones phone each other without asking permission from the people who own them.

That is the message that Becky Fury sent me.

I think I will go and lie down now. It has been a long day.