Maggy Whitehouse, comic and vicar: “Let’s say The Truth is in Finchley”

“I was at the end of my rope with Christianity…”

Yesterday’s blog was a chat with Maggy Whitehouse, stand-up comedian and freelance vicar/priest.

It was intended to be about her comedy, but strayed into religion… Here it continues…

JOHN: So, at home, you have an Isis and Mary altar? Isis the Egyptian god, not the Islamic fundamentalists.

MAGGY: Yes, Isis and Mary represent the Great Mother, because it’s all one Great Mother and one Great Father. The idea is she stuck her husband’s body back together after he was all carved up and she managed to conceive a child from it.

I studied New Testament Greek and really got into it and then I met a Jewish guy and he was at the end of his rope with Judaism and I was at the end of my rope with Christianity and my teacher of healing sent us off to this guy in London who was teaching Kabbalah, which is Jewish mysticism. So I started studying that.

MAGGY: No. There are two sorts of Kabbalah. Hers is based in the 16th century and takes the theory that, when God created the Universe, he made a mistake.

Mine is based in Biblical times, which is that, when God created the Universe, it was all perfect and we screwed up. Well, not even that, because Jews don’t believe in Original Sin, so how could Jesus? 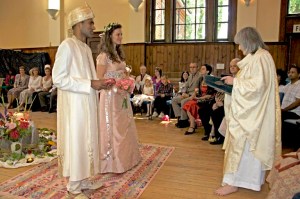 Anyway, there I was, doing this New Age stuff, doing funerals and my now-husband’s best friend was murdered in London and he and I were members of the same Kabbalah group. He asked me to do the funeral for Jon and my (Christian) bishop was in the congregation and phoned me up the following week and said: “OK, God told me we need you and you need us.”

But he was a guy after my own mind who was saying: Christianity has lost EVERYTHING. It’s all meant to be about love, inclusivity, kindness, simplicity. So I decided I would train. And I did.

MAGGY: One thing is we only have one Hebrew testament. There used to be dozens and dozens and dozens of versions of it. But they pulled it all together into one after the Romans destroyed the Temple in Jerusalem in AD 70. So we don’t know what the original text was.

We DO know that there are an awful lot of edits. And also, in ancient days, they read the text on four levels: the literal, the allegorical, the metaphysical and the mystical. If you take the texts out of the literal sense, they’re all about the psychological development of the soul.

MAGGY: I am a very passionate follower of the teachings of Jesus… But he never once asked us to worship him. He said: “Follow me.”

JOHN: Buddha tried that. It didn’t work. I am not a god. I am not a religion. Do NOT worship me. But now loads of people clearly worship him as an idol.

MAGGY: Of course it doesn’t work. The thing about faith is… If you like the look of it, you’ve got to go on the journey, go through all these Road to Damascus moments.

I was Church of England, but now I am an Independent. We have been associated with part of the liberal Catholic Church, but I am actually ‘an independent’.

JOHN: If you don’t follow the rules of a specific recognised branch of Christianity, surely you are a heretic?

MAGGY: Of COURSE I am a heretic. The Methodists in West Devon use me – I’ve got two services this Sunday – 11.00am and 6.30pm – which is very decent of them. They heard me on BBC Radio Devon: I did a year there as a presenter. But my local rector, who runs the Anglican area can’t use me, because he would get lynched.

JOHN: So you are only really recognised as a proper person by the Methodists?

MAGGY: I’m not really recognised by them, because I can’t do communion for them. I just showed up, lay on my face on the floor in my white robe and got my hands and brow anointed.

MAGGY: I COULD be Druidy. The wonderful thing is, if you do this mysticism, this direct experience of what you perceive to be the divine, you can converse with anyone of any faith and none – And that’s what it’s about.

Maggy’s first book – about a different type of journey

JOHN: You have written seventeen books, mostly about religion and spirituality.

MAGGY: I’m writing a new book at the moment: Kabbalah and Healing. I have to deliver it to the publisher by the end of September; published the beginning of next year.

JOHN: I suppose we should mention you doing stand-up comedy as, supposedly, that is the bloody reason why we are sitting here chatting in the first place. How did you get into comedy?

MAGGY: I do spiritual workshops and events and things like that to make a living. People kept saying to me: “You’re very funny; you should do comedy.”

There was a comedy course in Birmingham half a mile from me that cost £50. I went along and I was the oldest person by 35 years. At the end, there was a showcase and, a week later, I was asked to back Hal Cruttenden on an Edinburgh Fringe preview at Kings Heath in Birmingham.

I started doing unpaid gigs after that. But then I moved to Devon. Six months later, I got cancer – non-Hodgkin lymphoma. That was a massive Road to Damascus healing journey too.

MAGGY: I did one Edinburgh run in 2014 when I had only been performing comedy for 18 months and I had the cancer at the time. I went to Edinburgh as a bucket list thing. I had to rest all day, do my hour at night, then go back and rest. So I didn’t really get the Edinburgh experience at all.

JOHN: Will you go again?

MAGGY: At the moment, I am trying to get together four priests including me to go to the Edinburgh Fringe in 2019 – There’s Ravi Holy, a rector in Canterbury; Kate Bruce, who’s chaplain to the RAF at Brize Norton; and Mark Townsend, who’s an ex-Anglican but still a vicar who is a magician.

JOHN: So where else do you go from here? Another Road to Damascus?

MAGGY: I have no idea where I go from here. I basically thought: I will give the comedy five years and see what happens. That is almost up now.

I don’t know where I’m going.

I am writing the book; I am doing spiritual workshops; I am pottering along quite happily in comedy.

And I am happy.

I am incredibly happy.