The interior of Cafe Diana in London’s Notting Hill

Phil and Nathan had tea with me in Cafe Diana – a culinary shrine to the late Princess of Wales, opposite the Consular Section of the Russian Embassy in London’s Notting Hill and near the brutalist Czech Embassy. It was their choice of venue. Also present was Dec Munro, one of the begetters of Angel Comedy’s Bill Murray club.

Dec has let them have an entire afternoon of six previews at the Bill Murray on Sunday 5th February – from 1.45pm to 6.00pm, unless they repeat everything twice, in which case who knows?

Consignia were performing in Swansea last night. If I had been more efficient, I could have posted this blog before then to give the gig a plug.

But I wasn’t and didn’t.

At last year’s Edinburgh Fringe, I saw their show The Abridged Dapper Eleven-Hour Monochrome Dream Show twice. Well, I had little alternative. When it got to the end of their one-hour slot, they simply did the whole show again from beginning to end. When we met at Cafe Diana, Nathan was feeling ill and was very tired. Our conversation, under walls covered in photos of Princess Diana, went like this:

Phil Jarvis at the Edinburgh Fringe in 2015

JOHN: I was surprised when you repeated the show in Edinburgh that there seemed to have been a script.

NATHAN: The Leicester Comedy Festival is the last time we will do that show.

NATHAN: And, after Leicester, we will do something new for Edinburgh this year.

PHIL: At the Edinburgh Fringe, I want to do an unofficial Dinner For One tribute show. I am trying to get the smallest room I can and put a table in it with six people round it.

JOHN: Isn’t the whole point of Dinner For One that he is serving things to non-existent people?

JOHN: This show would run the whole duration of the Fringe?

PHIL: It would be a one-off. There would be a knees-up, because that’s what the show is.

PHIL: I think it is, yeah. A melancholic knees-up.

JOHN: A sort of Chas & Dave with tears?

PHIL: (TO ME) We are waiting for Bridge.

JOHN: But, apart from your Dinner For One with six people, what is the new Consignia show for Edinburgh? 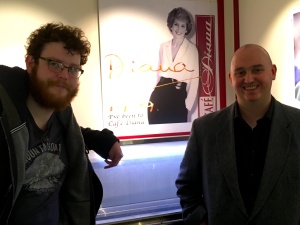 JOHN: Why is it called that?

PHIL: It has to be more pretentious than last year’s.

NATHAN: We have a gig booked in Norwich for it already.

PHIL: We did it last year. That’s where last year’s gig found its feet. Before that, The Abridged Dapper Eleven-Hour Monochrome Dream Show was a disaster.

NATHAN: I went to university in Norwich.

PHIL: I’m going to run a gig in Basingstoke.

JOHN: What? Into the ground? 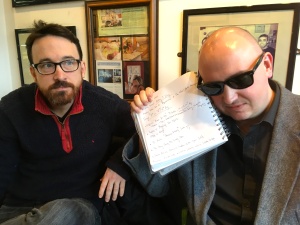 PHIL: I think there’s a band called Goat as well.

JOHN: And an animal.

NATHAN: Nobody says: “Go at a comedy club.”

JOHN: So why call yourselves Consignia?

NATHAN: We didn’t have a name in Edinburgh last year, but now we have retrospectively given ourselves a name.

JOHN (TO NATHAN): Are you going to fall forward unconscious into that soup or what?

Nathan Willcock alas did not fall into his soup

JOHN: Why did you choose the name Consignia?

NATHAN: It was going to be the new name of the Post Office but they got rid of it, so we thought: We’ll have it.

JOHN: You didn’t think of calling yourselves The Post Office?

PHIL: It’s not as funny.

NATHAN: With Consignia, only a few people remember it happening. It was so stupid. I had to check with people: Did that actually happen?

JOHN: Ah. So it IS suitable for your shows, then.

NATHAN: We are hoping to get into a high-profile legal battle with the bloke who thought up the name.

JOHN: Is that why you invited me here?

PHIL: That is why we like brutalism in architecture.

JOHN: Are you sure you are not misunderstanding the word? It is not just beating-up people in the street.

PHIL: We want to perform at The Comedy Store.

JOHN: In the Gong Show bit?

NATHAN: Yes. They film you and you can pay £5 to get a copy. We could probably use it in our new show: about us being booed off. We will just stay on stage.

PHIL: They will be gonging and we will just stay on until the bouncers come on to get us. They will think about it a bit.

NATHAN: Basically, we want them to get violent… and then we will see if we can still get the video.

JOHN: You really do misunderstand what Brutalism is.

NATHAN: He still hasn’t turned up.

PHIL: Jason Bridge. He will be with us in Leicester. With my son.

JOHN: You have a son?

NATHAN: Do you remember anything from our show in Edinburgh?

NATHAN: The one you sat through twice.

JOHN: No. I do remember the second time was a revelation because I thought: I’ve never seen anything like this before.

PHIL: Do you not remember me covered in blood wearing a gas mask, holding my son?

JOHN: No. I thought I must have dreamt that.

PHIL: You saw my penis.

JOHN: Did I see it twice?

PHIL: Yes you did.

JOHN: I don’t remember it.

NATHAN: My girlfriend hates that.

Can you spot Nathan Willcock in his Facebook header image?

NATHAN: No… Nicholas. Because Nicholas is covered in egg and mud…

NATHAN:…but I refuse to throw it out. It’s in our cupboard.

JOHN: Why is guacamole funny? All those Al Queda prisoners in there for years on end…

PHIL: Do you not remember our show at all, John?

NATHAN: You remember we put a carrot and some humus on stage…

NATHAN: …and then played a really slowed-down version of Daphne & Celeste and then walked off stage and the audience just looked at this carrot and humus.

PHIL: One night, we couldn’t find any humus. We could only find discounted guacamole.

NATHAN: That was the night the second show happened – the X-rated one – the night you were there, John. We did everything naked.

NATHAN: And, instead of putting a carrot in the guacamole, we put Phil’s penis in it and put a microphone to it.

NATHAN: And guacamole is a bit spicy so Phil said it hurt quite a bit.

PHIL: I had a mild burn for the rest of the Fringe. 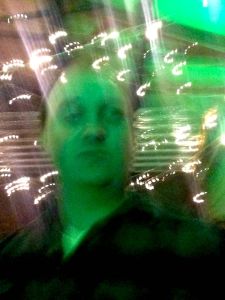 NATHAN: That’s how committed we are.

JOHN: And your girlfriend is not keen on this?

NATHAN: She asked me.

JOHN: How did she ask you?

NATHAN: She took me to Belgium.

JOHN: Is that a euphemism I don’t know? I have heard “took me round the world” but never “took me to Belgium”.

NATHAN: Ghent. She didn’t go down on one knee. She just gave me a ring underneath the belfry.

JOHN: Is that another euphemism I haven’t heard?

NATHAN: December 9th. The wedding. It’s going to have a Christmas theme. We had a load of crackers delivered the other day.

JOHN: In January? For your December wedding? That’s forward planning.

NATHAN: She’s very organised. We have put the soundtrack for The Abridged Dapper Eleven-Hour Monochrome Dream Show up on Bandcamp and you can buy the full album for £1,000. You can also download individual tracks for free.

JOHN: It is all commercialism with you, isn’t it?