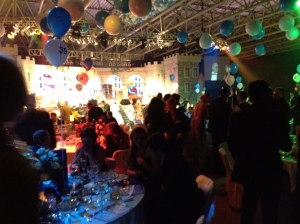 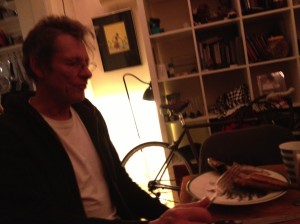 “I just don’t like putting holes in walls any more,” said Martin Soan last night. “If there’s a hole, there has to be a screw in it.”

I have no idea why he said this… Then we had a general knowledge quiz.

“How many barbels are on a barbel?” he asked.

“42,” I said confidently. “That’s the answer to everything.”

He then told a true story about how, years ago, when his two daughters were younger, the whole family had gone on a boating holiday on a river and pulled up at a jetty where a man pulled a net out of the water and photographed the fish he had caught.

He then threw the fish one-by-one on the sloping ground by the river.

“They were barbel fish,” said Martin. “Barbels are very very strong, because they have to swim through really strong river currents and they search for things on the river bed with their noses.

“They up-ended themselves on the grass so they were standing upright on their noses and they danced back down into the river on their noses.

I was at Martin’s home last night because there had been going to be a small comedy show in Greenwich pub The Lord Hood in memory of the late comedian Malcolm Hardee. But it was cancelled because of the heavy snow.

“I was going to do an act at the show,” Martin told me. “A one-off. It can’t be repeated. Well, it CAN be repeated, but only every six months or so. Maybe I’ll do it at our next show.” (Martin and his wife Vivienne run a twice-a-month comedy club called Pull The Other One.)

“When is the next Pull The Other One?” I asked.

“That’s Burns Night,” I said. “You should pipe in the haggis.”

“It’s not supposed to be a haggis,” Martin said. “Everyone thinks that you are supposed to pipe in the haggis on Burns Night, but that’s not true. It’s just a Sassenach English interpretation of a Scottish tradition. What the Scots traditionally piped in was a herring.”

“Piped in from the North Sea like the gas?” I asked.

“No,” said Martin, “it’s true. Traditionally, it was the herring that was piped in on Burns Night.”

“What happened,” said Martin, “it was Oram & Meeton, Dr Brown and me finishing off the whole evening.”

“With the piper and the kippers and the Action Man,” said Vivienne.

“With the piper and the kippers and the Action Man,” Vivienne sang.

“Vivienne’s told you that one story,” Martin said to me, “But you are never going to hear the story of the perfect National Health comedy sketch that I was involved in and it was real and it happened and it obeyed every single rule of comedy and echoed one of the greatest sketches in TV comedy.”

“What about the dancing barbel fish?” I asked.

“That’s true,” said Martin. “Totally true. I am thinking of writing a short story about the dancing barbel fish and Izaak Walton, who wrote The Compleat Anger and Issac Newton. Or it could be a story for the radio. But I’ll never get round to it.”

Last night was, in theory, slightly sad, because today Martin & Vivienne’s daughter Sydney is moving to Australia with her boyfriend Charlie, an Apple Genius who has packed light to move to Oz and, in fact, seemed to have packed little except his surf board.

I dreamt last night of a green gash…

My mouth with a cough sweet in it.

I am still coughing in the night and I must have woken myself up again, because I remember I dreamt last night about being in a car in a city. I had just arrived by plane. The car was driving through the streets and there was a strange horizontal glowing gash in the sky, like a horizontal slash with an intense dark green inside it.

A vertical column of various cloudy greys – whooshed up from among the buildings to join the green gash.

And then, looking over, I saw between high buildings, the top of another tall building falling at 45 degrees; it was toppling over. It had a pyramidal top, like the Canary Wharf tower in London, but I was not in London; I was abroad somewhere.

It was not a nightmare, just a dream.

In a couple of weeks, I am probably going to Kiev for the weekend, to attend a Burns Supper on 31st March, despite the fact Burns Night is 25th January.

Kiev is 62 miles south of Chernobyl.

I drove to Greenwich last night and passed through the Blackwall Tunnel with the Canary Wharf tower’s pyramidal top flashing its white light in the night.

I don’t know which is stranger – the way the mind twists reality into surreality or the fact that a Burns Night is being held in Kiev on 31st March.