“It has come a long way since you saw it in that basement room in London,” Simon Jay told me this afternoon.

I first met Simon when he staged Mr Twonkey’s play Jennifer’s Robot Arm at the Bread & Roses venue in Clapham in April 2015. But he was talking about his Donald Trump comedy show in 2016, which has now transformed into Trumpageddon and is playing to full houses at the Gilded Balloon in Edinburgh.

It cannot be easy to perform as Donald Trump – part real person, part Timothy Burton living fantasy character – in a scripted show with so much back story Simon has to know and the nightmare of up-dating as the real-life Trump bandwagon careers off in wild new directions every day. The show is, of course, scripted and some of the audience interaction can be prepared, but not all. And yesterday, the previous day’s North Korean lunacy had been incorporated into the narrative.

I tend not to like character comedy but with a caveat.

Simon Jay being made into the leader of the free world

The closer the act is to what might be a real person, the less I like it.

The less ‘real’ and the more ‘cartoony’ the character is, the more likely I am to appreciate the act.

Charlie Chuck, for example, was/is believable to the point that people would/do ask me: Is he really like that? (No, of course he is not.) But ‘Charlie Chuck’ was/is an OTT cartoon-style character.

The interesting thing about Donald Trump and Trumpageddon is that it is an impression of a totally real person but the real Trump is pretty-much a cartoon character.

Perhaps all this is why stand-up comedy attracts me.

I am interested in people. Real people. Ideally eccentric people.

Malcolm Hardee Cunning Stunt Award contender Cally Beaton is a not eccentric, but she is assuredly real. Her show Cally Beaton’s Super Cally Fragile Lipstick is about her autistic son (who agreed to be mentioned on stage after negotiations over a meal at Nando’s), bisexuality and things menopausal. Sounds like a tough comedy show to sell, but Cally is fluently funny, fascinating and manages to pitch herself to Edinburgh Fringe AND Radio 4 audiences. She comes across as a real person chatting to the audience. Which is what the best modern stand-up is.

On stage, modern stand-up comics tend to perform as (slightly heightened versions of) themselves.

Actors pretend to be characters totally different from themselves.

A character comedian with caveats and cravat

Which makes Milo McCabe’s show interesting, because he is performing as a character: the slightly anachronistic Terry-Thomas-ish, dressing gown and cravat-wearing Talented Mr Hawke. It sort-of could-be a real, very well-observed person from a slightly early era, but it is also (successfully) a cartoon character.

In reality, the character would be rather sleazy and unlikable. In Milo’s audience-pleasing, fleshed-out character act, he is rather loveable. The audience totally believes in the character. But Milo also cleverly – by reading letters to Mr Hawke from other people – briefly slips in two or three totally different voices which remind the audience (and demonstrate to any agents/promoters present) that they are watching a skilled comic actor who would be equally interesting in other situations.

As mentioned in previous blogs, Milo McCabe’s father Mike McCabe is performing at the Fringe as the late comic Frank Carson. That is another genre entirely and my brain is too sleep-deprived and befuddled to go into it.

One reason I tend to see no point in watching comic actors who are performing as fictional characters who are too close to ‘real’ people who could actually exist is that the lives of real people are always wildly more OTT than anything anyone could possibly think up.

His show is titled Spunk on My Lady’s Face which is an extreme under-selling of the outrageousness of some of his stories. Scott always puts the aargh! into ‘explicit’.

Tonight he was playing to an audience of what seemed to me to be mostly straight couples and I initially thought: Oh dear, this could go ether way! But they were guffawing-away pretty much all the way through Scott’s wild, true gay stories.

It was a bit like running through the highlights of the Emperor Nero’s excesses during the most decadent days of the Roman Empire. If you think you have heard outrageously excessive stories, you ain’t heard nothing till you have sat through 55 minutes of Scott Agnew.

Cally Beaton: How to recover an award nomination by revealing another oddity

A couple of days ago, I wrote the second of two blogs about Cally Beaton and others claiming to have won an increasingly prestigious Malcolm Hardee Comedy Award at the Edinburgh Fringe.

On Facebook, Alex Petty of the Laughing Horse Free Festival asked: “Could you draw a flow chart of your blog? Even by Edinburgh standards it’s all a little complicated!”

Beware of what follows, Martin.

The story so far…

Cally Beaton’s publicity for her upcoming Edinburgh Fringe show Super Cally Fragile Lipstick claimed that she and her show Cat Call (with Catherine Bohart) had won “a Malcolm Hardee Award” last year. She/they/it had not. In fact, she/it had won an unconnected First Minute Award from TV producer Edward Hobson who gave the prize for the show with the best first minute. (He left after seeing the first minute of each show.)

But then her publicist(s) claimed that it was all a misunderstanding not a cunning publicity stunt.

This screwed Cally’s chance of being nominated for a Cunning Stunt Award – a mistake is not a stunt – although there was a slight chance that, if she had knowingly conned her publicists into the incorrect claim, that was a cunning stunt and she might still be a contender.

Yesterday, Cally seems to have re-inserted herself into the running for an increasingly prestigious nomination. Here is the correspondence.

CALLY
I think if I were to come clean about the fact that I wasn’t on stage during the award-winning first minute of Cat Call, then the Cunning Stunt nomination and indeed potentially award is mine…

JOHN
If you really were not on stage in the first minute of Cat Call and yet won the First Minute Award, that would be glorious. Especially if you used last year’s First Minute Award win to publicise this year’s show.

CALLY
Only Catherine Bohart, Edward Hobson and I know whether I was really on stage that fateful first minute… I’m quite sure that would be Edward’s recollection… My memory is that I was in the loo.

JOHN
I suppose the idea of audience members being present is too ridiculous a supposition at the Edinburgh Fringe?

CALLY
Both audience members that day were legless.

ED HOBSON
It is true. When I went to see Cat Call, it was a double-header with Catherine Bohart doing the first half hour followed by Cally Beaton doing the second.

I went for the first minute, saw Catherine Bohart for sixty seconds, thought it was great and shortlisted the show. During the judging session, I re-listened to the recordings of the finalists’ first minutes I had recorded and decided that show was the funniest. Consequently Cally Beaton’s show won without me ever seeing her on stage.

Only after meeting them again at the increasingly prestigious Malcolm Hardee Comedy Awards ceremony did I realise they were not a double act.

I still stand by the decision.

The First Minute Award is the premier comedy award at the Edinburgh Fringe that judges a comedy show in less time than it takes Martin Soan to get his cock out.

My fiancée arrives in the UK next Wednesday

Cally’s Fringe show this year. Worth a Cunning Stunt?

Whether any of this is true or not is irrelevant. To quote Malcolm Hardee: Might be good. Might be shit.

Claire Smith of the Scotsman and the increasingly prestigious Malcolm Hardee Comedy Awards judging panel told me that Cally was inspired to start performing comedy when Joan Rivers told her to “get her ass on stage”.

“Is this true?” I asked Cally.

“Joan Rivers? All true,” she told me. “Her lesbian assistant developed quite a crush on me too. Other Hollywood ‘A’ listers who told me to try comedy include Amy Poehler & Kevin Hart.”

My head is starting to swirl.

I live by the guiding thought that the more unlikely something sounds the more likely it is to be true.

“For last year’s show, I bribed Offspring No 1 with a Nando’s to do material about him. Later today, we are off to negotiate this year’s show… over cocktails & a three course meal at Wahaca.”

Did I mention that I am, myself, a multi-award-winner?

When I was around 12 years old, I won a prize from Brooke Bond Tea for my handwriting.

And, in 2010, Fringe Report gave me an award as Best Awarder of Awards.

Would I lie to you?

There is a blog about how to genuinely win an increasingly prestigious Malcolm Hardee Comedy Award HERE.

How publicists can easily lose you an Edinburgh Fringe award nomination

This sounded to me like the sort of admirable scam that should get her nominated for the increasingly prestigious Malcolm Hardee Cunning Stunt Award.

The story was picked-up yesterday by comedy industry website Chortle – as part of a list of false publicity claims by various performers – which reported re Cally that: “The press release for her delightfully named show Super Cally Fragile Lipstick boasts that she won the ‘Malcolm Hardee First Minute Award’, last year.

Today, Chortle has a piece which includes the suicidal lines:

“Comedian Cally Beaton also felt that she had ended up on the list through no fault of her own… Her publicist said they were told Beaton had won a ‘First Minute Award at the Malcolm Hardee Awards.”

The implication is that it was a misunderstanding rather than a blatant blag. 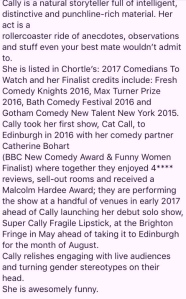 The publicity for Cally Beaton’s show

In fact, the publicity for her show this year, did not say she had won a First Minute Award (true) at all. It said:

“Cally took her first show, Cat Call, to Edinburgh in 2016 with her comedy partner Catherine Bohart… where together they… received a Malcolm Hardee Award..”

If the story now is it was all a tragic mistake rather than a wholly intentional piece of blagging then, obviously, it can’t be a cunning stunt.

To say she (or they) won a First Minute Award last year is true.

To say it was a Malcolm Hardee First Minute Award is stretching the truth beyond the facts (it was presented immediately before the Malcolm Hardee Awards Show started and was unconnected to the increasingly prestigious Awards themselves).

One of the increasingly prestigious Cunning Stunt Awards

Sadly, by saying the 2016 award-claim was some sort of misunderstanding rather than a clever scam, the publicists have probably lost her an award nomination.