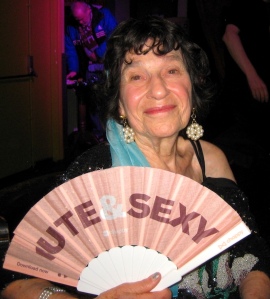 Tonight is New Year’s Eve. I will be making chicken soup and consoling myself that I am me.

I used to think it was the thrill of performance that has kept me in this comedy merry-go-round for 15 years, but it isn’t really that. It is the richness and depth of each visit I make to a different place; it is my amazement when I meet people who are so very kind, brave and giving. We tend to think that those kinds of people are not around anymore but I discover them every single day.

On December 13, I was booked to perform a comedy show at The Fiddlers Pub in Bonn, Germany, run by Andy Valvur.

You do not fly to Bonn, however. You fly to Cologne, which is exactly where I was the week before.

I came out of border control, which in Germany is simple and fast (they have other things to do than harass old women… sadly not so in Britain).

For me, Andy Valvur is a breath of San Francisco though he is actually from Estonia.

Andy, like most of us in this business, is unique. That is why we become comedians. We are all fuck-ups at anything else. Andy speaks something like four languages fluently. I am in awe of his talents. The idea of anyone being able to do effective comedy that depends on nuance and double entendre in more than one language stuns me.

His wife is now working at a high-paying job somewhere very distant from Germany and they see each other every few months which, he says, is a perfect arrangement. I can certainly understand that, since my longest relationship was two stormy, miserable years where I spent most of my time either starving myself or ducking behind a chair to avoid getting a back eye. Any other possible partnership I have considered has never lasted more than about ten challenging minutes. I am convinced that had Tommy and I lived several thousand miles apart, I would still be married. He couldn’t hit me from across an ocean.

Andy told me he preferred doing films and voice overs rather than comedy, but the owners of The Fiddlers Pub in Bonn asked him to run a comedy night and that is what he does now. It is evidently very successful and has a loyal audience that returns very often to see what is going on in the English-speaking comedy scene.

The bill this time included James Allan, a relatively young man who had both hips replaced at the same time; and Casey James who works at the European Space Agency in Cologne.

The audience was very small and most of them were German… which means English is a second or even third language.

I knew it would be a challenge to get them to laugh and I was right.

I got chuckles and I got smiles.

But no-one had to change their underwear (except me of course: after all, I AM 85) However, I got lots of compliments and another glass of Riesling when I finished my 45 minutes. So maybe… just maybe I did good.

I left early for my 1:30 plane back to Southend Airport in the UK. Cologne airport was not crowded and I managed to get a cup of coffee and a croissant before boarding the plane. Sadly, the German idea of a croissant would make Frenchmen commit suicide. Each one weighs more than a loaf of bread and your teeth have to be in excellent condition to bite through it. Security, though, was smooth sailing. Unlike in the UK, the Germans don’t think I have an atom bomb tucked into my bra.

It was important that my flight landed on time because I had to catch a 6:30pm train to Bracknell that evening for the second leg of this weekend.

But the flight was an hour late.

I got home at 4.00pm, unpacked, got the laundry started, changed clothes and went to St Pancras station to catch the train to Bracknell.

I love the South Hill Park Comedy Cellar in Bracknell. They treat each comedian like he is the king of England (if there was one) and this time Katherine Webb (she books us) gave us all a Christmas cake. I felt loved and very legitimate. Their audience wants to laugh and the room is just the right size so you can really talk to them and shake up their pre-conceived notions.

And that was what I did.

I managed to catch the late train back and was home in time for a quick midnight dinner before I packed again for Birmingham the next morning.

This event is a my favorite gig of the year: the Shoals Christmas Party.

The Shoals are a group of swimmers who go on trips together, have parties and sometimes swim.

I met Mark, their organizer, in Leicester two years ago when I was hosting the bike comedy show there and he invited me to do this gala for him. His father is the DJ and Mark Hillier is the spirit that keeps the men in the group excited about their projects.

“The Shoals are a group of swimmers who go on trips together, have parties and sometimes swim. Every member is a gem.”

Every member of the club is a gem. I know several personally and each one is a true English gentleman in every sense of the word. When I go there, they take care of me from the moment I get off the train until they drop me at the train station to go home.

I change clothes at Jim Clay’s home. Among his many attractions is a grand piano in the living room and a dachshund named Dexter.

The event is very special with comedy, dancing and a few cross-dressers to liven up the evening.

Whenever I see men in huge binding bras that don’t fit, stuffed with gobs of cotton and hairy legs crammed into high heels I gave up years ago, I wonder why on earth they put themselves through so much torture. Giving up those very items has actually freed me from back pain, bunions and sclerosis.

This time, when the event was over at midnight, I spent the night at Keith Nolan’s home and it was the most educational evening I have had in a very long time.

Keith is involved in city planning and talked about the demographics of making a neighborhood. I never realized all the factors that have to be considered and how crucial things like a near-by shop or a bus stop is.  We also talked about our social responsibility to one another and how important it is for our own well-being to care about the welfare of others.

I left Birmingham that Sunday morning brimming with hope for the world and filled with love for humanity. I arrived at Euston station on time. I embarked suffused with brotherly love determined to do my part to make it a better world… and was immediately plunged down to earth when I tried to get some groceries at the Sainsbury’s there.

It is an example of a tiny store that is part of a larger chain and relies on the Sainsbury imprimatur for its customers. It was out of everything and filled with staff too busy moving what was left from one shelf to another to help even when asked.

T.S.Eliot: a wise man but one who never had to face the reality of the Sainsbury’s store at Euston station

T.S Eliot says mankind cannot tolerate too much reality. I reached my limit while doing shopping at the Euston Sainsbury’s and it was downhill from then on.

When I got to the bus, I asked a man if he would help me with my case and he walked away from me, used the back door to get on the bus and sat right across from me. I felt very elderly. After all, after 85 years don’t I deserve someone to lift a case for me?

The answer is I do not.

But the UK has spoiled me so much I expect it and am actually puzzled when it doesn’t happen.

When I finally got home, I realized that I had been in three cities in less than 72 hours, done three different and successful shows and remembered all the words to all the sets I did. Most people can’t even get their Christmas shopping done in 72 hours.

Though, of course, neither can I.

Southeast Asia is next…