Sometimes, to slightly mis-quote Robert Louis Stevenson, it is better to travel hopefully than to arrive.

It’s what happens along the way that is interesting – the diversions and the sidetracks.

It’s a book, not a hairdressing salon…

“Celine’s Salon,” Tony Green said to me in the Soho Theatre Bar, back on June 9th, almost exactly two months ago.

“A hairdressing salon?” I asked.

“Celine used to run her ‘salon’ just round the corner from here. Celine Hispiche. That’s her name. I read a few short stories there. At Celine’s Salon. Now it’s going to be a book. Celine’s Salon, Volume One. The publisher phoned me up and said: Could you do a 600 word short story? One of the stories you read at the club? So I did.”

How very kind of him, I thought. But then he is an actor.

There are so many sub-cultures in Soho, let alone in London, that no-one can know them all. Tony Green, the comedy performer formerly known as Sir Gideon Vein, knows lots of sub-cultures and people I don’t.

He took me along to Torture Garden late last century dressed as a cricketer – HE was the one dressed as a cricketer – or maybe it was an homage to Sylvester McCoy’s incarnation of Doctor Who – because he (Tony Green) knew Sophie Seashell who was organising the Berlin-Between-The-Wars-type cabaret performances amid the slightly self-conscious fetishism and kinkiness going on in the disused 3-storey warehouse up a back street in Islington.

Celine must have been right under my nose all the time…

I hang my head in shame that I had never heard of Celine Hispiche until two months ago. She started her career as a featured writer at the Royal Court Theatre, progressed to singing duets with Marc Almond on his album Bluegate Fields and playing support to the Human League with her band Nitewreckage.

Then there was touring down the US East Coast with fellow comedians from Saturday Night Live, playing the comedy stage at the Glastonbury Festival, supporting Harry Hill at the Hackney Empire, four consecutive cabaret years at the Edinburgh Fringe and starting Celine’s Salon in 2015 at the Society Club, described as “an arts and culture bookshop in the daytime and a private members Bohemian cocktail lounge in the evening.” 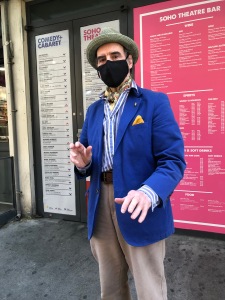 Tony Green in his mask outside Soho Theatre

“So,” I said, two months ago, “Shape-Shifting Lizards?”

“I got the idea,” Tony explained, “because some friends of mine who, at one time were quite well-balanced human beings, have gone… Well, they wouldn’t say ‘Conspiracy Mad’. They would say their eyes have been fully opened to this awful situation…”

“Oh no!” said Tony. “Not that! I’m quoting Gilbert & Sullivan here. My eyes are fully opened to this awful situation…

“No, no, not the virus, although they know all about the virus, of course. That’s why none of them are having the vaccination.”

“Because the world is run by an international cabal of Satanic paedophile cannibals?” I suggested.

“Of course.” said Tony. “I’m not saying this is the truth, but it’s what was told in a pub. You meet some strange people in public houses… So Lady Diana…”

“…was killed by the Cabal?” I guessed.

“Oh definitely,” said Tony. “But this is what was told in a pub… She was ‘nutted-off’ because she found out…”

“…about the Royal Family all being lizards?” I guessed.

“Oh definitely,” said Tony. Prince Philip told her: Whenever you want to see us about anything, always knock on the door first.”

“So they have time to shape-change?”

“Of course. And, of course, there was that one unfortunate time she didn’t knock. She burst in and saw and was told If you say anything about this… It wasn’t the fact she was expecting a baby with Dodi Fayed or because the chauffeur was drunk…”

“Whenever you want to see us, always knock on the door first”

“It has to be said,” I suggested, trying to be helpful, “that, in his dying days, Prince Philip did look a bit lizard-like – Did you see that photo in the car?”

“Oh, they’re all lizards,” said Tony with a twinkle in his eye. Well, both eyes. There was more than one twinkle in more than one eye. “On one a occasion, a very well-spoken young actor said to me: Oh, I’ve just heard you’re a ‘Cockney’, aren’t you? I know why all of you Cockney chaps are all so ugly and stunted and stupid. You’re all inbred, aren’t you… And then somebody said: I think he must be confusing Cockneys with the Royal Family.”

“You told me you also wrote a novella,” I prompted him.

“Oh – Halfway Up Arthur’s Seat – yes. It’s called that because the story came to me when I WAS halfway up Arthur’s Seat. In Edinburgh. I think it would make a great film, but it would cost a helluva lot of money. It needs 200 extras. It’s an homage to Edinburgh. It ends with what could possibly be described as a supernatural element. My partner read it and she felt it needed more explaining. I don’t think it does.

“A journalist friend of mine wrote a story about a certain notorious serial killer and he said to me: Do you think I made the ending only too obvious? I told him…”

“Have you read any of Jake Arnott’s books?” Tony asked.

“I’ve seen the TV adaptations,” I told him, “but not read them. Have you read The Long Firm?”

“I have. When I wrote my story – Halfway Up Arthur’s Seat – it’s nothing at all like Jake Arnott – but I’d been reading a lot of Muriel Spark stuff. It was reading her stuff that prompted me – that and living in Edinburgh…”

Did I mention Tony spends a lot of time in Edinburgh now? Mostly, he says, “as a result of the bleedin’ virus and the lockdown’s etc.” I met him when he was briefly back in London. 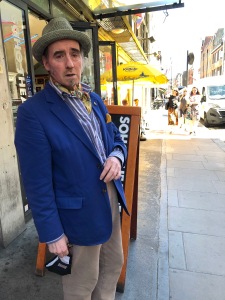 Tony Green in Soho, London, not in Edinburgh

I forgot to tell you.

It was two months ago. Other things have intervened.

“The hero of my story,” Tony continued, “is called T. Jellicoe Mungham. He wrote a book in 1902 called Dear Oscar, when he was at Cambridge. He was lauded for this book. He is a mischievous but loveable person in my book but also quite wise.”

Tony ignored this and continued:

“Muriel Spark is a hero of mine, like Andrew Marr and my idol Michael Gove. All Scots. All I can say about Michael Gove is that the horror film industry’s loss is politics’ gain. You know he was in a film, playing a vicar? Robert Hardy on one side and Christopher Lee on the other. 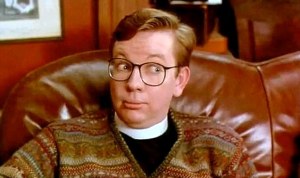 “Michael Gove was actually adopted and his parents were Socialists. I can only imagine someone said to him when he was quite young: Michael, you can’t keep backing losers. Conservative is just another name for Winner. You’re a Winner. Join the Conservatives and get rid of that Scots accent… Muriel Spark had no Scots accent either.

“Of course, she left Edinburgh when relatively young and lived in Camberwell in London, for years, virtually turning her back on her Scottish/Jewish heritage and becoming a devout Roman Catholic like her friends and admirers Graham Greene and Evelyn Waugh. Funny that she wrote her must famous book The Prime of Miss Jean Brodie in Edinburgh in the early 1960s on an extended visit to her parents flat in Bruntsfield Place.

“I think my stories have a very Scottish ring… The reason I wrote Halfway Up Arthur’s Seat was because there is NOT a part in it for me. People accuse me of being up my own anus, but I’ve written a story where there’s no part in it for me at all… Did you know Jake Arnott wrote a book about Alastair Crowley?”

“Just before she died,” Tony continued, “I saw Fenella Fielding do a reading. She was over 90. The reading she did from her autobiography, for a woman of that age, was A1. It was a perfect rendering. The reading was only a few months before her departure. There was a Q&A afterwards and I said to her: It’s very refreshing to hear someone reading as you read. You don’t give the impression of being a luvvie. As an actor, was there anyone you ever worked with you didn’t like?”

“Oh, that’s a very naughty question, she said. I don’t think I could answer that here. She was a nonagenarian and a likeable one. She knew even months before her demise that she still needed to ‘play the game’.”

Celine’s Salon is published in the UK on 6th September.

Like Robert Louis Stevenson didn’t quite say at the beginning of this blog… Sometimes it is better to travel hopefully than to arrive. It is the journey that is interesting. The sidetracks. And – hey! – Robert Louis Stevenson ended up in the South Seas Islands, which wasn’t too bad a place to end up at the time.