Last week, as you may have noticed, there were two Islamic fanatic terror attacks in Paris which were triggered by cartoons of the prophet Mohammed in the satirical magazine Charlie Hebdo. Twenty people, including three terrorists, were killed in three days.

The attacks triggered, on Sunday, an alleged 4 million people marching on the streets of France in protest – including 40 world leaders in Paris.

By unhappy coincidence, my friend Lynn had pre-booked a weekend trip to Paris with her husband whom I shall call Peter (not his name).

This morning, she sent me an e-mail:

The weather in Paris was chilly so Peter wore a fleece cap and I wore a cashmere beret… But we were told to take them off in the Apple shop!

I asked Lynn: “Did they think your cashmere beret was one step away from a burkha?”

I got this reply:

It was simply a city with lots of people strolling towards the march areas and no traffic apart from police cars, police bikes, taxis and a very few private cars. The parking areas were full with cars with CD diplomatic plates. We did not go on the Metro as we prefer to walk everywhere, but also in case it was overcrowded.

Yesterday, The Scotsman reported the march in Paris on Sunday

It seemed to me a fruitless and expensive exercise. If every member of the Muslim faith in Europe had gone out on the streets to protest about the lunatics taking over their religion (although any religion involves lunacy at worst and extreme suspension of disbelief at best) it would have some purpose. If each nation had expressed its sympathy and explained that, instead of spending enormous amounts on policing such events and sending politicians to France, they were investing extra sums in policing the fanatics, that would have some purpose. This was just a similar reaction to the sick and maudlin overkill whenever anyone famous-for-a-day dies (Diana Windsor being the most extreme example); it achieves nothing.

I described our headgear in the Apple Store in detail to show that our faces were in no way obscured from security cameras – we were not wearing hoodies. If we had been Orthodox Jews, would Peter have been asked to remove his kippah/skullcap or, if Sikh, his turban?

I asked my eternally-un-named friend what her view of the whole caboodle is. She told me: 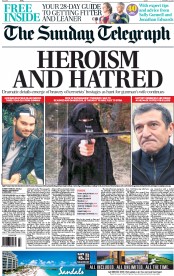 A lot of people are talking about leaving France out of fear and a lot of people are living in terror because the PC media keeps portraying the perpetrators as disconnected or some such. In fact, most people feel disconnected, but they don’t go around killing people – and certainly not because of a feeling it is not only their right but their duty.

The media, including the BBC is responsible for bad, biased reporting on Israel and Palestine. Our way of life has been eroded. Muslims should review their religion in the light of common sense.

In the late 1960s and early 1970s, I remember the thing people feared was young people being brainwashed by the Moonies – How to rescue them from the brainwashing which had the person really believing in the cult. It’s ironic that the moon features in both – in this case, the crescent moon.