Yesterday, my blog was about the rise of storytelling nights in the UK – I was talking to comedians Matt Price/Michael Kossew at Soho Theatre in London. About two minutes after they left, John Henry Falle wandered past. He is a quarter of The Beta Males comedy group and 100% of The Story Beast.

My first words were:

“We should have a chat.”

“You are always taking your clothes off.”

“That did come up in your blog at some point.” said John Henry and then, apparently jokingly, “It’s possibly a way of… eh… dealing with any body dysmorphia I might ever have had.”

“The Beta Males are still going strong,” I said.

“Yes, we’re all doing little bits and pieces. We did half an hour each at the Edinburgh Fringe and I was doing my character The Story Beast, which is modern-day bardolatry. I tell the old stories in new ways and new stories in old ways. I want it to be three things. A cross between Ziggy Stardust, Tom Baker as Doctor Who and John Hurt as The Storyteller. They were all big influences on me.”

“I was talking earlier,” I said, “to Matt Price and Michael Kossew about their evenings at the Camden Head.”

“That’s where I first got naked,” said John Henry. “Well, in public.”

“They do storytelling,” I said.

“It’s the oldest art form,” said John Henry, “and it does appear to be having a bit of a resurgence at the moment. There are fewer gag merchants around and more storytellers.”

“At the moment,” said John Henry, “I’m writing a load of poems about internet memes and YouTube videos, but in a heightened mock-heroic style.”

“Beowulf is all told in gibberish.”

“But,” added John Henry, “there are references to Ray Winstone and the Beowulf film.

“I think,” I said, “I saw you at Jorik Mol’s Comedian’s Bookshelf evening doing… was it Beowulf?” 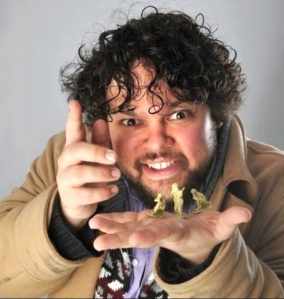 “That’s my showpiece at the moment for The Story Beast,” said John Henry. “I failed Beowulf and, indeed, the whole of Old English as a language in my first year at university, but I always loved the story of Beowulf, even if I didn’t have a hang of the language.”

“You have a good voice for telling heroic sagas,” I suggested.

“It’s all about the resonance,” explained John Henry. “My dad was a… you call it a barrister here. He is an advocate in Jersey. So he taught me to project my voice.”

“Heavens!” I told him, relieved. “When you said ‘you call it a barrister here’ I thought you were going to reveal you were an alien from Mars.”

“That’s the way I do see myself as a Jerseyman,” replied John Henry. “I’m very much an alien in this country.”

“Years ago,” I told him, “I interviewed Nigel Kneale, who wrote Quatermass. He was from the Isle of Man and he thought it had made him a better writer, because he was ‘British’ but, at the same time, was not British, so he could view things simultaneously as an outsider and an insider.”

John Henry perked up at talk of Nigel Neale.

“In the three Quatermasses,” he said, “Nigel Kneale wrote the three basic types of science fiction… We go to them… They come to us… and They’ve been here all along. You can almost pop every sci-fi story into that.”

“Science fiction and fantasy. I was a big Doctor Who fan.”

“Who was your Doctor?” I asked.

“Someone who must have hated me gave me, when I was seven, a Doctor Who video – Time and The Rani, which is a terrible story.

“It’s the one where Sylvester McCoy regenerates after falling off an exercise bike. It’s really bad, but I fell unconditionally in love with it.”

“So you sat in Jersey…” I prompted.

“… believing I was some sort of wizard,” said John Henry. “Growing up with Harry Potter.”

“You could still become a wizard even now,” I said. “You have a beard.”

“Some. It was my girlfriend’s birthday recently and I decided I would cut off most of my beard and most of my hair and try to look a bit presentable for her dad.”

“No. She did her PhD on English travel literature from EM Forster to the present. Stories about Britishness abroad. Ideas of the Englishman as an alien.” 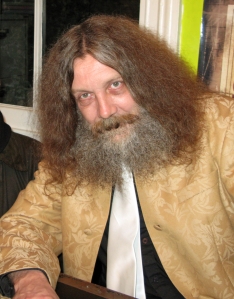 Alan Moore: a man with a fine beard and staff

“I’m a big Alan Moore fan,” admitted John Henry, “and he walks around with a giant snake-headed staff, worshipping a snake god called Glycon who was revealed to be a sock puppet in the 6th century. The idea is you know magic is all nonsense, but you go after it and you try and make it happen.”

“So,” I said, “when you were a kid in Jersey, did you ever want to be a comedy performer?”

“I wanted to be a Time Lord wizard superhero.”

“With power over people?”

“I was terribly bullied. I don’t know if that fits this profile of the loner child who is in love with science fiction, but… I think kids nowadays are quite lucky in that things like Harry Potter and Doctor Who are in the mainstream. I don’t know what lonely children are like now particularly, but there’s enough room for them on the internet and the culture at large to provide them with something.

“I used to love The Hulk, who was so angry and repressed that he would become this immense creature and I always felt an affinity with him. And I think my dad quite liked him too because my dad was a body builder when he was younger.”

“And then he became a barrister,” I said. “Is there much connection between being a barrister and a wizard?”

“There is a legal spell in Jersey.,” said John Henry. “The Clameur de Haro. If someone is encroaching on your property or on common land, you say to them in front of witnesses: Haro! Haro! Haro! A l’aide, mon Prince, on me fait tort. which means Hear me! Hear me! Hear me! Help me, Duke Rollo! Wrong is being done unto me. And then you recite the Lord’s Prayer in Jersey-Norman French and they have to stop what they’re doing or they go to prison. That’s an interesting spell. A bit of ancient Norman custom which is still there as part of the legal system in Jersey. My dad has brought three of those cases in the past 20 years.”

“What do they speak in Jersey?” I asked. “A sort on Norman-French-Scandinavian? Where were the Normans from anyway? They’re not French.”

“They had close connections to the kings of Norway,” John Henry told me. “So around 1066, when Jersey conquered England, there was a Harold Hardrada who was King of Norway who was also trying to get his greasy mitts on England, but only William had the proper claim and a mass of army. I’m intensely proud of Jersey. I love it deeply.”

“It’s an interesting thing,” I suggested, “like Nigel Kneale having an outsider’s insider view of Britain.”

John Henry and a Pret a Manger coffee cup sit in the Soho Theatre Bar: which is more alien?

“I do feel a certain alien-ness as a Jewish Jerseyman,” said John Henry. “I’m too Jewish for Jersey and too Jersey to be here and too odd an atheist around my Jewish family in North London.”

John Henry’s mother is Jewish from North London. His father is a Jerseyman.

“But maybe it’s a cultivated alien-ness,” said John Henry. “You choose who you are and I’ve decided to be an alien in London and in Jersey too. Or, looking at it another way, I can choose to be accepted in three communities and can pass for whatever I want to be within those communities. That’s a pleasure.”

“The Story Beast. I’m starting to do some proper YouTube videos and have one already – All The Kings and Queens of England. And I’m in a new Horrible Histories film – shot it in March, coming out next February. It’s called Bill and is a comedy about William Shakespeare. I’m a Spanish assassin: one of a load of Spanish assassins trying to kill Queen Elizabeth. I got a fight sequence with Damian Lewis; I was supposed to get a head butt from him.”

“I don’t know what The Story Beast will do. Either I will become incredibly successful or I will go out onto a moor or a barrow somewhere and just freeze to death and be buried with my various accoutrements – my swords and wands.”