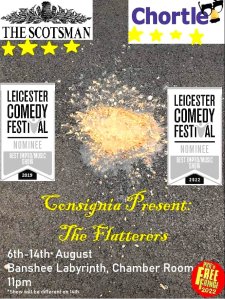 “If you like fat blokes sweating, futuristic, nihilistic storylines, confusion… and a LOT…”

I blogged about the commendably eccentric Consignia comedy group at the beginning of last week.

They are currently at the Edinburgh Fringe

Their penultimate show is tonight; their run finishes tomorrow. 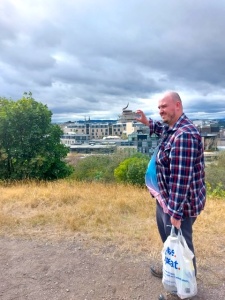 “Consignia fans will be surprised at the use of an unexpected joke at one point, but, as usual, if you like fat blokes sweating, futuristic, nihilistic storylines, confusion, repetition and a LOT of poo, then this is undoubtedly the show for you.”

I thought it would be interesting for Consignia’s main begetter Phil Jarvis to write a review of his time at the Fringe this year.

The result is below. 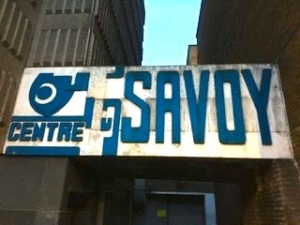 Edinburgh in the sunshine makes the city exceedingly beautiful, if that was even possible. However, I started off in Glasgow, enjoying the neglected brutalism of the Savoy Shopping Mall, which I give 10/10

Eventually, I make my way to Edinburgh, where I watch three afternoons in a row of Nate Kitch and Caitriona Dowden’s double bill, At-Swim-Two-Birds but it’s Two Comics called Nate Kitch and Caitriona Dowden at BrewDog (The Garage)… enjoying the masterful storytelling and deadpan delivery of Caitriona’s set and Nate’s commitment to pushing his ideas to unexpected outcomes. 10/10 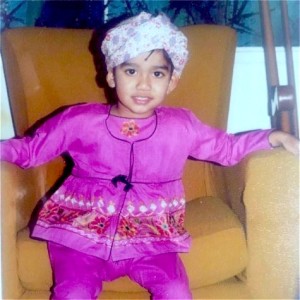 Some of what surreal Alwin Solanky left behind in Uganda…

Alwin Solanky’s monologue at the Omni Centre – about his personal experiences as a refugee from Idi Amin’s Uganda – What You Leave Behind makes me cry each time I’ve seen it.

This is a show that deserves to be snapped up by arts theatres across the land, detailing the social relations of living in the UK in the 1970s and 1980s as a refugee, told through well-crafted vignettes and the approachable surrealism I have come to expect from Alwin. 10/10

Sisyphean Mark Dean Quinn really did have a stroke

Mark Dean Quinn’s show Mark Dean Quinn: Has a Stroke but at Least He Got a Show Out of It at the Revolution Bar is different each evening. The first set I see ends with a visibly distressed Mark. I overhear some audience members asking afterwards if that was real. Oh yes, all too real.

The next time I see the show, Mark puts himself and the audience through even more of an endurance test with a flip chart. I count only one walk out: a real feat considering Mark is possibly the most experimental comedian in the UK devoted to a Sisyphean struggle. 10/10

The Omni Centre venue has wonderfully put together performance spaces with stages, with an unfortunate consequence of sound bleeding from one show into another. This makes for an interesting experience.

Within this sound collage, I watch Rob Duncan’s Baby Trains which delivers the goods on a segue, a functioning train set prop in his hands, taking the audience on a journey of being a CEO and a teacher. Perfect psychedelia for my sunburnt scalp. 10/10

Also at the Omni Centre, I zoned out a bit to Soliloquy of a Horse, but my headspace was probably on the right planet for this tale of misadventure and redemption, performed in a stripped-back, low-fi aesthetic with no props, apart from a chair in the middle.

Perfect ground to just let your imagination run wild conjuring up the visions the storytelling leads you on. 10/10

I show my pal from Consignia, Nathan “Wilco” Willcock, the Basil Spence designed Canongate building (10/10), with the concrete fire exit taking our senses to a state of transcendence.

On this high, we find out Kate Copstick has given our show a 4-star review in The Scotsman. Wilco is desperate to find a copy of The Scotsman. I just play it cool but, secretly, I’m happy.

As it turns out, the gig we do that evening is the worst it’s been the whole run. The costumes Nathan and I wear are now drenched in the fat man sweat we have unleashed over the run so far and humming hard. Nathan performs with minimal energy and I flounder not knowing how to riff off it. 0/10

I bury my sorrows by paying an overpriced £7.50 for chips, cheese and curry sauce, lathered in brown sauce (10/10) on the walk back to the digs.

The next day, to rejuvenate ourselves, a trip up to Carlton Hill has Nathan and me ecstatic at the sight of the Art Deco St Andrew’s House (10/10).

We climb up the steps to Carlton Hill and Nathan is disgusted at the sight, in the distance, of a shopping mall that now looks like a Mr Whippy style turd (1/10).

Still, Edinburgh is pretty beautiful in the sun.

Consignia’s latest and possibly last ever show The Flatterers

Sometime during that theatrical experience at the Banshee Labyrinth, they will also be giving out their Gareth Morinan Alternative New Act Of The Year Award.

I  realise none of this venue information is of any practical use to my long-suffering reader in far-off Guatemala nor for anyone reading this three years hence, but I feel obliged to share it for completism’s sake.