My daily blog has not appeared for a couple of days because WordPress, which hosts it, had some technical problem which meant it was impossible for me to save or post anything. And, even if you pay them, they do not provide Support – you have to post on user forums with no guarantee of any response from anyone.

Giving them grief on Twitter seemed to have some slight effect – eventually. To a partial extent. I got this message:

Let us know if we can help with anything! Here’s how to export your content and take it with you.

It might have been useful if WordPress could have sorted out the technical problem which means I cannot post any blogs. I might have thought WordPress would be more concerned with their software not working rather than helping people to leave.

After WordPress getting more Twitter and Reddit grief orchestrated by this blog’s South Coast correspondent, Sandra Smith, I got some reaction from a WordPress ‘staff’ member (whom you apparently can’t contact normally) – which was minimal and apparently transient, as I have heard no more from him.

But, about three hours later, when I tried again, the problem had disappeared. I had changed and done nothing. So I can only assume WordPress corrected the fault and never bothered to tell me.

As Facebook Friend Alias Robert Cummins succinctly put it: WordPress is amazingly shit, in all sorts of tiresome and complex ways, which I’d really rather not go into this late in the evening.

That is his real name, by the way – the one he was given at birth – Alias Robert Cummins. It is a bizarre story and one probably worth a blog at some point.

Anyway, the problem was eventually solved (I hope it has been, anyway) with the help not just of Sandra Smith but also the excellent cyber-guy and indefatigable Malcolm Hardee Comedy Awards Show person Stephen O’Donnell.

In the two days of missing blogs and navel-gazing, the world still turned, with John Ward, designer of the increasingly prestigious Malcolm Hardee Comedy Awards getting some publicity in Lincolnshire of all places because today the James Bond film SPECTRE is released and, a couple of years ago, John designed a combined gun-rack and toilet paper holder.

He used to own a gun licence himself: something that never made me sleep easy in bed.

David McGillivray (left) during the filming with Nigel Havers

To which David McGillivray replied:

Incorrect. It’s utter filth, liable to deprave and corrupt. I was blindfolded while I was producing it.

Sir John Gielgud’s script was inspired, it seems, by his love of men in tight trousers, particularly trousers made from corduroy.

Last Thursday, the day after my blog on the film appeared, the following was posted (with photo) on Trouser Bar’s Facebook page: 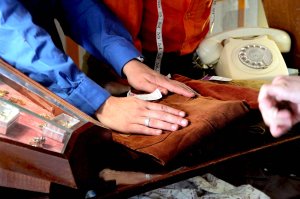 I’ve just seen the rough cut. Sir John would have creamed his corduroy jeans at this close-up.

“The students at the schools and universities [in Pennsylvania] are a wonderful audience, and a good deal of needle cord manch is worn (very badly cut, and usually only partly zipped!) so my eyes occasionally wander.”

Also posted on the Trouser Bar Facebook page was this quote from a Galton and Simpson comedy script for Hancock’s Half Hour in 1958:

Even in the 1950s it seems that corduroy was associated with homosexuality.

All this, plus a photo on my blog of Sir John Gielgud with Sir Ralph Richardson in Harold Pinter’s No Man’s Land, made Anna Smith – this blog’s occasional Canadian correspondent – ask::

Comedian Tony Hancock – Is this the face of a 1950s criminal?

I bought a Tony Hancock album last week at a junk shop. A woman wondered to me whether he was a criminal.

“He looks like a criminal,” the woman countered, doubting my certainty.

“It was the 1950s,” I said, exasperated. “Everyone looked like a criminal back then.”