A newspaper mystery & Britain in 1950

The mysterious smudged copy of he Guardian

I was passing through Kings Cross St Pancras tube station a couple of days ago when I saw. in the Evening Standard bins, some newspapers which were not Evening Standards.

Several were an odd, blurred-print, 40-page edition of, apparently, The Guardian. Except everything was artistically smudged and it was some edition covering the overthrow of Colonel Gaddafi in Libya.

Maybe it was some bit of agitprop, but there seemed to be no message.

Maybe it was some offbeat advert for some product, but there was no visible plug anywhere.

The other paper in the Evening Standard bin was a copy of the long-deceased Daily Graphic newspaper dated Friday March 24, 1950. The headline was:

and that story ran beside a photograph of Queen Mary doing needlework in the garden of Marlborough House. The caption inexplicably said: Picture released, yesterday, as New York hailed her million-stitch carpet. 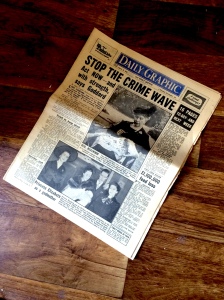 Lord Goddard, Lord Chief Justice, warned the Government in the House of Lords last night that the wave of violence must be stopped. A way of ending it had got to be found.

“If the crime wave goes on,” he said gravely, “the demand that it be stopped will be overwhelming.

“Strength must be applied. I hope to goodness it will not be applied too late.”

But Lord Goddard, who was speaking in the second day’s debate on a motion calling attention to the crime wave, made it clear that he was not asking for corporal punishment to be brought back.

“It is one thing,” he explained, “to deplore – as I do – abolition of all forms of corporal punishment, and another to demand their reimposition.

“My reluctance to do so is because I think there is nothing worse than continually altering penalties….

“It is true I suggested the abolition of the ‘cat’ and the retaining of other forms – not merely the birch, but the cane, so that boys could have been caned…

“When a prisoner comes out after having the ‘cat’,” he said, “he is treated as a martyr or hero.

“But when he gets the birch he knows he will come out the object of ridicule – and nothing kills so quickly as ridicule.” 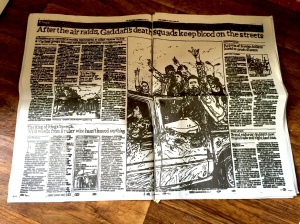 The 1950 copy of the Daily Graphic was maybe an insight into another world 65 years ago.

But why it was in a modern-day Evening Standard bin and what the purpose was/is of the multiple smudged copies of The Guardian remains an utterly unexplained mystery.