“I’ve got a pork pie leather hat on,” William Lobban told me yesterday, “and I’ve got a round pair of John Lennon glasses on and a fake moustache and I’m wearing a poncho. But you blend in with that in London, don’t you? That was part of my disguise: the sort of Mexican look.

“There was a man in the telephone box next to me and there wasn’t even a telephone card in the phone, so I knew immediately there was something not quite right. I got as far as the end of the street, not far from New Scotland Yard, and then all I heard was Stop! Armed police! and there must have been about 15 cops and at least half a dozen were carrying handguns. So there was this big scene in London.”

“And why,” I asked, “were you Britain’s Most Wanted man at that point?”

“It was because of the double shooting in Glasgow,” William replied.

In England, I guess the two most vividly-remembered crimes of the late 20th century were the Great Train Robbery in 1963 and the shooting of George Cornell by Ronnie Kray in the Blind Beggar pub in 1966.

In Scotland, arguably, the key crime was the killing of Bobby Glover and Joe ‘Bananas’ Hanlon in 1991 in revenge for the killing of Arthur Thompson’s son.

Arthur Thompson was the longtime ‘godfather’ of crime in Glasgow and the central belt of Scotland. On 18th August 1991, his son ‘Fat Boy’ was shot three times – reportedly once in the face, once in the body and once up the anus. He was killed right outside the family home which was called ‘The Ponderosa’ (named after the home in TV Western series Bonanza).

Gangster Paul Ferris was arrested for the shooting and later found not guilty after a £4 million trial.

On the day of Fat Boy’s funeral, the bodies of Paul Ferris’ associates – Bobby Glover and Joe Hanlon – were found dead. They had been dumped in a car on the route of Fat Boy’s funeral procession, so that his hearse passed by their dead bodies. They had reportedly been shot in the head and up the anus. Welcome to Glasgow.

“They were both suspected of being involved in the murder of Arthur Thompson’s son.” explained William. “Their bodies were found in Hanlon’s car, parked just yards from their ‘gang hut’ – the Cottage Bar. It was a real insult.

Lobban – once ‘Most Wanted’ man in the UK

“And that was why I became the Most Wanted man in Great Britain – because I was on record, I believe, as the last person to have seen those two alive (except for their killer or killers). People have suggested I set them up. I did meet them and I was in the car with them for five minutes at the very most but then I left them. Where they went after that, I don’t know.

“I had phoned Bobby Glover’s house the night he was killed, John, but there was nothing unusual in that. Me and Bobby would talk on the phone regularly. There was nothing untoward in me phoning that night. Certainly not.” 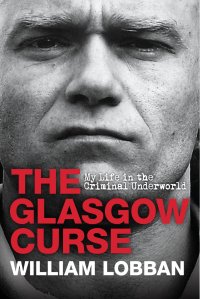 William Lobban’s autobiography The Glasgow Curse is published today and he goes into more detail there. Three chapters are free-to-read on the publisher’s website.

“You wrote the book yourself…” I prompted him yesterday.

“I once discussed writing a criminal’s autobiography,” I said, “and we gave up because there were crimes which had not been solved, crimes which were not even known-about and you would have to disguise so many facts you would be throwing away the whole points of the stories.”

“Well,” said William, “with me, I think honesty is the best policy. To be totally up-front. To me, a book is a sort of sacred thing. You have to be true and genuine and that means not exaggerating things to make something sound better. Telling it how it is. The truth. I think that will shine through.

“I think that’s a big issue with a lot of these true crime books where you have ghost writers creating books for these ex-criminals or so-called ex-criminals.”

“Why write the book now?” I asked. 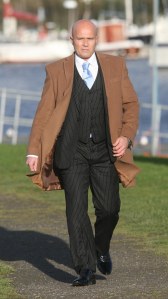 “Then Paul Ferris brought out The Ferris Conspiracy and, since then, there’s been 12 or 13 books about the Glasgow underworld. It was Ferris who opened the floodgates – well, it was actually Reg McKay (a now dead Glasgow crime reporter) who wrote his book for him.

“And there have also been books by retired police officers like Gerard Gallacher who wrote Gangsters, Killers and Me and Joe Jackson who wrote Chasing Killers. They were both involved in investigating the triple murders.”

The Paul Ferris version of the Fat Boy and Glover/Hanlon killings appears in recent feature film The Wee Man which, though not exactly 100% factually accurate, I think gives a fair impression of the level of violence in Glasgow.

As William Lobban points out in the introduction to his Glasgow Curse book, Glasgow is Britain’s most violent city with 2.7 murders per 100,000 of population as opposed to 1.0 per 100,000 in the rest of the country.

“You were self-educated,” I said to him yesterday. 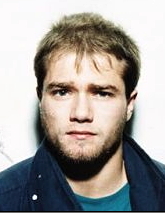 “Yes, I never went to school as such – well, I went now and again, but I was always a naughty wee boy. I was never really there apart from when I was placed into care by the authorities when you’re obligated to go to school.”

“And you were born in Exeter Prison,” I said, “to what the Daily Record calls a violent, schizophrenic mother.”

“Yes,” said William. “My mother Sylvia was registered as a schizophrenic. She got sentenced to two years borstal in 1967 and I was born in February 1968. Exeter Prison back then was a women’s borstal.

“She came from a big family – the Manson family,” William told me. “She had four brothers and two sisters and she was with a couple of her brothers trying to steal some antiques down in England – the contents of a safe in some country mansion. My mother was very violent, especially with her teeth – I can vouch for that, as I was on the receiving end a couple of times. When she was arrested, a police sergeant got her in a neck hold, trying to restrain her, but she managed to nearly bite his thumb off and that’s what she received her two years borstal for.

“I suppose it was inevitable I was going to lead a criminal life, being born into one of the most notorious criminal families in Glasgow.

“I was born in prison and stayed in prison with my mother for six months and then my grandparents – William and Esther Manson – took me away back to Carntyne in Glasgow.

“When I grew up, there was a sort of solidarity in the neighbourhood; everyone detested the cops.”

“I’m writing the sequel to The Glasgow Curse,” he replied. “I’m partly using the chunks I had to cut out of the first manuscript. But I think that question about What am I going to do now? is a good one.

“In life, you’ve really got to know who you are and how others perceive you as a person. When a long-term prisoner comes out of prison… OK, I’ve been out of prison for a long, long time, but… Look, it’s all down to identity… It took me a long, long time to figure out what I was going to do and, in the last couple of years – since I started writing the book – it has created a whole new identity for me. Now I’ve got to use the identity to the best of my advantage, so people do perceive me as being an author.

“Author is a title I actually like. I prefer that to Gangster. Believe me, it’s much better being called an author than a gangster. Folks like myself who’ve led a life of crime and have only ever known crime and have done a lot of bad things are all on a trial run.

“Now I’ve got a new lease of life, a new road to travel. I see loads of light at the end of the tunnel and I’m really going for it. But I am still on a trial run where people are going to be watching and maybe hoping that I will stumble, that I will fall over and they’ll be able to say He was never any good.

“It’s tough. You’ve really got to be on the ball. It takes a lot of hard graft and dedication and, for this to work, you’ve got to get support from other people – influential people, people that matter, people with respect.  Because, if they don’t get on your side, no-one else is going to believe you.

“Society have their part to play as well. They’ve got to give you a chance. They can’t keep on punishing you for things you’ve done in the past.

“I’m just hoping that, now I’ve got a book out, there will be a new life too.”