I have my gas and electricity supplied by E.ON Energy. I have never had any trouble with them and this is about the generality of stupidity, not about them.

I got a new boiler installed in my Borehamwood home a few months ago via E.ON. They arranged it. It was actually installed by a sub-contractor based in Northampton.

I then got a cold call a few weeks ago allegedly from E.ON Energy trying to pressure sell me into buying ‘free’ solar panels which – of course – I would have to pay for. I think it was actually from the sub-contractor. I could be wrong.

Last week, on Friday morning in Edinburgh, I got a voice message on my mobile.

It was from a lady Laura “calling from E.ON Energy” about my boiler replacement.

She said E.ON Energy wanted me to send them an E.ON Energy utility bill to “update” their records.

It seemed a bit odd that E.ON was asking me to send them a utility bill their own computer had sent me… so they could update information presumably on the E.ON Energy computer system.

Despite assuming this was a scam, I phoned the number. A recorded message said I had to phone that number during their opening hours of 8.00am-4.00pm, Monday to Friday despite the fact I was phoning around 11.40am on a Friday.

I presumed it was a scam, so filled in an online form to E.ON’s help people. It asked: Did I want to be replied-to by email or phone?

So, when they phoned back this morning, of course, the first thing the E.ON Energy person wanted “for security reasons under the Data Protection Act” were details companies always tell you never to give out to people you don’t know who phone you.

When we got round this eternal problem, the lovely lady told me she had phoned 0808 168 6424 and this was, indeed, part of E.ON Energy. She told me that the other department of E.ON Energy had “lost some of the paperwork they had” – apparently a bill issued by E.ON Energy to me – and so they need a replacement.

“I have talked to them…” she started.

Ah! I foolishly thought. She has sent a copy of one of my utility bills from her computer to their computer.

But no, of course she had not.

She had talked to the other department and given them my e-mail address so they can e-mail to tell me they are going to phone me and then they will phone me to ask me to send E.ON a copy of an energy bill which E.ON sent to me.

Presumably any other company would have done the same.

It is the stupidity of the world.

I await the next phone call with interest.

When I got woken up by the E.ON phone call this morning, it was at 11.55am. I was still fast asleep.

My eight hour drive last night, back from Edinburgh to Borehamwood, was fine.

Meanwhile, on the Chortle website, I read an article by comedian Tom Rhodes about the Late ’n’ Live show at the Edinburgh Fringe in August 2000. He writes:

“The show that night was an all-American line up of comedians, hosted by Lewis Schaffer. A lot of people had gone there specifically to heckle Lewis. It was vicious and it was mean and, I admit, I found it amusing.”

I asked Lewis Schaffer if he remembered this gig. 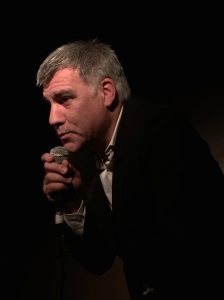 “I was decidedly ill-equipped to compere the old Late and Live show,” he told me, “let alone do a full spot. I didn’t understand the British attitude to America – which at the time was pure jealously – and I wasn’t good at the time. I just looked like I should be good. Also I was only adept at dealing with New York audiences and hadn’t worked with Brits. I’ve not been invited back to Late and Live.

“I don’t remember a gig like the one Tom Rhodes describes. I do remember one gig where Rich Hall followed me and sang a song about how shit I was. And another gig where an audience member tried to get on my stage and I pushed him back down. He said he was only coming on to help. I thought he was trying to take over. Now I know British people and know they have the propensity for mob action and also that other comics can be cruel for a laugh.”

Virgin Media: are they incapable of sending e-mails because their broadband is so slow?

Two days ago, someone in Hertfordshire told me they could only get occasional and erratic internet connections via their Virgin Media broadband line and the alleged Customer Service Helplines don’t. That’s what I found too.

Yesterday, someone in Buckinghamshire told me they could not watch 3-minute YouTube videos on what Virgin Media claim is the fastest broadband in Britain – because the broadband is so slow.

That seems a very interesting approach to security; and maybe my memory is fading like a Virgin Media broadband line.

Even more bizarre, it seems that, in the 21st century, Virgin Media is unable to send e-mails to customers – possibly because their broadband is so slow.

Or perhaps this is all part of some new Jeremy Beadle style TV series.

If only… If only…

After spending the period July 29th to September 30th trying and failing to move my landline and broadband to O2, I gave up. Instead, I signed with Virgin Media’s cable system.

The day before the switch-over, I got a call from Virgin Media saying they wanted to talk to me about the installation but, first, under the terms of the Data Protection Act, they had to ask me for my security details, including my address and the password on my account. I refused. They said, if I did not answer the security questions, my installation would be cancelled. I told the woman I had no way of knowing for certain who she was but that I would tell her my security details if she told me her bank PIN number and home telephone number and I would then check them. She refused, which I thought was a tad unreasonable. I refused to give her my security details. She said, as a consequence, they would cancel my installation. So I phoned back a Virgin Media number where they confirmed it was, indeed, Virgin Media who had called but that they would still install the phone and broadband service. Their previous phone call had been because they had wanted to check if there were any parking restrictions outside my house which might affect the installer’s van.

I complained by e-mail to Virgin Media that they were asking me to give my security details to any caller who claimed they were from Virgin Media. Two days later, I got a call from the Virgin Media Complaints Dept to discuss my complaint but first, the guy told me, I would have to answer security questions including my password. I refused. He seemed surprised.

Have Telecom companies in the UK been secretly involved in organising the Commonwealth Games? It somehow seems likely.

Virgin Media should think themselves lucky. When I was having trouble with BT and O2 I had pre-emptively arranged for eccentric inventor John Ward to come down to London one afternoon and be photographed with his Bullshit detector (labelled B******T Detector) outside the BT headquarters building. The next day Mr Methane, the world’s only professional farteur, had agreed to come to London in costume and fart at the BT building to see if it made any difference to the hot air emanating from the building. The third day would have involved a farmer whom I know slightly with a large muck-spraying machine.