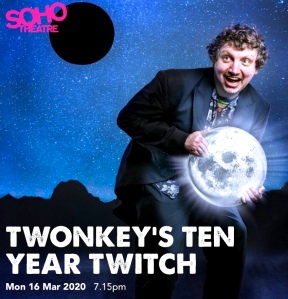 Paul Vickers aka Twonkey performs his latest show Twonkey’s Ten Year Twitch at the Soho Theatre in London next Monday night. He lives in Edinburgh. I live in London (ish). We talked via Apple FaceTime… We both got sidetracked in cyberspace…

JOHN: So your new show is…

PAUL: Last year’s Edinburgh Fringe show. But it’s not been seen in London before… Well, no, that’s not true. The very first early version of it I did at the Bill Murray comedy club in London. But that was a disaster. All over the place. It was the first time I’d ever done a show where I had misjudged it so badly.

JOHN: Yet it was successful at the Fringe last August. What had you got so wrong in the first version?

PAUL: The right bits in the wrong order. I had sussed-out a formula for how to do my shows. The best way to do a Twonkey show is to have loads of short, fast, fun bits to (LAUGHS) lure people into a false sense of security and then, about halfway through the show start telling a longer narrative right through to the end.

For some reason, I decided in that first version to do it in reverse to see what would happen. I started with the story and then went to short, fast bits at the end and it didn’t work because people said: “You were telling a story and then you just completely abandoned it.”

JOHN: So, like Eric Morecambe, you did all the right bits, but not necessarily in the right order… in that first London try-out.

PAUL: Exactly. So I did major surgery on it overnight and, the next day, I did it in Leicester in a completely different way and it worked. Can you hear the dog?

PAUL: There’s a dog here. He’s going tomorrow. He’s going to live on a farm, which offers him a more rewarding life than we can… Eric.

Eric is Paul’s dog, but is not Paul

PAUL: I don’t know. It was my friend Mary who named him. I suppose it’s a strong name. I’ve written a song about him.

PAUL: I remember! The name! It’s because of Lynn Ruth Miller… That’s why he’s called Eric. Because Lynn Ruth always calls me Eric. Whenever she sees me, she yells out (in an American accent): “Oh, my God! It’s Eric!”

JOHN: She has always thought you are named Eric?

JOHN: When I worked at Granada TV, there was a man who called me ‘Peter’ for two years. I never had it in my heart to tell him I was not Peter. But he was happy and I was happy, so no problem. It’s only a name.

PAUL: Yeah, well, that’s how it goes, isn’t it? After a while, I stopped correcting Lynn Ruth because it seemed pointless.

JOHN: What does she say when she sees the dog? Does she call it Paul?

Mr Twonkey is cleaning up (Photo by Steve Ullathorne)

JOHN: Just as well, The dog might have developed an identity crisis… You were talking about the narrative story in Twonkey’s Ten Year Twitch? What’s the narrative?

PAUL: It’s about the fact that all the weather in the world has been replaced by fake weather in 1982.

PAUL: Because the old weather was being repaired and so there is a factory in the Dordogne where the weather is being stored. I travel to the Dordogne and find out who invented the weather originally… That kind of thing.

JOHN: Oh, the old ‘weather factory in the Dordogne’ meme…

PAUL: The previous year’s show Night Train to Liechtenstein had been about inherited wealth. It was a bit like Jack & The Beanstalk because, when I went to collect the inheritance, all there was were some beans but, when I grew the beans, inside there was a pumpkin and inside the pumpkin were diamonds.

JOHN: But that is not what Twonkey’s Ten Year Twitch is about… 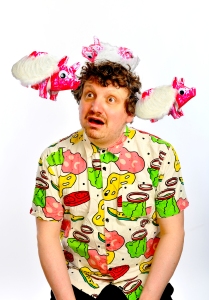 PAUL: No. But the bit of music I was working on at the time of Night Train to Liechtenstein was like a choral thing and I realised the key it was in was exactly the same as Somewhere Over The Rainbow. So the end of the show had me holding up this pumpkin with diamonds in it and suddenly there was this weird choral music and out of it came Somewhere Over The Rainbow and it almost felt like I was floating out of the room. It was very odd, especially when I got tired.

JOHN: But that’s not the ending of Twonkey’s Ten Year Twitch.

PAUL: No. It’s probably going to end with an advertisement for my next show, which will feature an interview with Maradona, the Argentinian football player. He will be played by Simon Jay, who is also in Twonkey’s Ten Year Twitch. He plays ‘the old hag’ – and he’s also the technician as well. I thought: Well, it’s daft him just sitting there pressing buttons. If he came on and acted a little part, it would be cool as well.

JOHN: So he is going to do a trailer as Maradona for your next show at the end of this show in which he is ‘the old hag’.

PAUL: Yes. He was Leonardo da Vinci’s landlady in Night Train to Liechtenstein.

JOHN: And in your next show he will be Maradona.

PAUL: Yes. My next show is going to be called Twonkey’s Custard Club.

“I misjudged what a physical mess…”

PAUL: It’s about rival custard shops. I’m still writing it. I’m hoping ‘the custard chef’ will be built in time, but he has very long arms and is difficult to pack. I’ve done one dry run of it, but I misjudged what a physical mess it creates, because there is a bit where I get covered in custard pies and I can’t actually see anything. It was difficult to see my laptop computer and it was not actually good for my laptop computer to be covered in shaving foam.

But it was good in terms of working out the parameters of what I need to do. I realised I will need a couple of towels close-by. And I now know how many custard pies you can get out of one tin of shaving foam. And I have a good Django Reinhardt kind-of jazzy song called The Custard Club, so it seemed like a good idea.

JOHN: But that’s not what happens in Twonkey’s Ten Year Twitch…

PAUL: No. Sometimes you don’t know what a show is about until like five years later and then you sort-of think: Ah! That show was about me! I think it’s impossible to create work without it being about yourself. But you can’t necessarily see it immediately… I had quite a difficult year last year. I had a lot going on in my personal life. Just a lot going on.