He maintained his principles, even in death.

When his body was raised from the dock several days later, he was still clutching a bottle of beer.

Malcolm was famed for spotting and helping talented comedians at the start of their careers. He was also known for running and hosting the Tunnel Palladium club night – a Sunday evening show with good professional acts but also an ‘open spot’ section so dangerous for new acts to perform in that aspiring comics would sometimes travel hundreds of miles to see if they could survive an audience known and feared for its razor-sharp heckling.

After the club was raided and closed by the police for drugs offences (NOT on one of Malcolm’s nights – he only did Sundays) he opened Up The Creek comedy club in Greenwich where, initially, the hecklers continued their trade.

Here, I chat to one of the Tunnel’s most effective hecklers – Gordon ‘Bres’ Breslin. 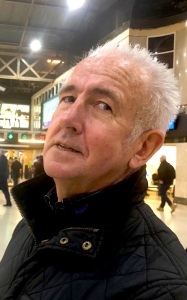 Gordon Breslin – a taste for heckling

JOHN: You got a taste for heckling at the Tunnel club…

BRES: Well, before that, me and a friend used to go to Speaker’s Corner on a Sunday afternoon and absorb some of the heckling of speakers that was going on. I remember heckling the Reverend Donald Soper on occasion, when he was preaching there. That’s where we cut out teeth.

BRES: He did indeed. He was a very nice gentleman. After that, though, we discovered the Tunnel club.

JOHN: You were regulars.

BRES: Yes. And the heckling was quite good fun. To start with, it was limited to the open mic spots.

JOHN: But all heckling is surely cruel and nasty.

BRES: Sometimes it is cruel and nasty but sometimes an act just needs to go if they’re not very good.

JOHN: But these poor, sensitive people have spent months refining their act…

BRES: Well, being heckled is how they know it needs more refining. If an act is really bad, something should be done apart from walking out. I think audiences have become too tolerant of bad acts these days. Back in the Tunnel days, it could be quite rude – “Get off! You’re shit!” This was 1984 to 1989.

But word got out about the heckling there and it got progressively more ermmm… ‘aggressive’ I guess is the word.

JOHN: Well, I guess throwing beer glasses at the acts is aggressive.

BRES: Yes, but people like Simon Munnery were cutting their teeth there and he didn’t mind a bit of heckling. There used to be a very good heckler at The Tunnel called The Pirate…

JOHN: I think Malcolm told me The Pirate was a stockbroker who retired early to Spain with lots of money.

BRES: His great one was… A comic would make his best joke of the night and The Pirate’s voice would be heard saying “Oh larf… Oh larf… Oh larf,” which would just floor the comedian. Some of the heckling was very very funny.

JOHN: And the best heckles are…?

BRES: I think the art of the heckle is… A heckler wants to make a funny gag and make the audience laugh and perhaps even get the biggest laugh of the night and – not necessarily make the comic feel small, but – make the comic appreciate the heckler’s one one-liner as well.

JOHN: Surely it is just solely to make the comic feel small.

BRES: Well, in a way. But the comic has the right of reply, so he can make the heckler feel even smaller. A lot of people don’t want to sit in the front rows because they don’t want to be picked-on by the comic. Let’s get it into perspective. For me comedians, if they are any good, will always pick on the front row. So they have more than ample opportunity to get their retaliation in first.

JOHN: And the audience would sometimes call out for a taxi…

BRES: Yes. “Cab for (the comedian’s name)!” Those were the regular heckles. But then it got a bit overtaken by… Well, a bit violent, I should say – Throwing things and it… it got… erm… too bad. There was an incident where Clarence & Joy Pickles (Adam Wide & Babs Sutton)… I think it was a beer crate or something like that was thrown at them – something quite chunky…

JOHN: Malcolm told me he wasn’t the compere that night. I think he was maybe at the Edinburgh Fringe.

BRES: I think she sustained a cut – Joy Pickles. So, the following week, there was a letter to the audience from Tunnel Arts – which was Malcolm – asking all members of the audience to “refrain from throwing anything at the stage… The Tunnel Club is noted for its witty heckling and appreciation of a good act. Let’s not spoil it by behaving as animals. It is coming to a point where a lot of good acts are thinking twice about performing here (quite rightly so) and this means that your enjoyment will be impaired.”

A copy of this letter was put on every seat in the Tunnel club and, of course, when Malcolm came on stage, he got bombarded by people throwing screwed-up letters and paper aeroplanes at him. So the letter became a surreal heckle.

JOHN: My memory is that, sometimes, they didn’t just throw beer glasses at the acts; they sometimes threw half-full glasses so there was beer all over the place too.

BRES: Well, it was probably quite watered-down beer.

JOHN: The heckling-off of acts was quite effective.

BRES: Yes. Sometimes self-defeating. Sometimes you might have seven or eight acts and the show would be over in half an hour because everyone had been heckled off – sometimes even the good ones.

JOHN: Malcolm told me that, after the trouble with Clarence & Joy Pickles, he had to make it a members-only club and he then discovered lots of the audience were not local. They were coming through the Blackwall Tunnel from north of the Thames and a lot were very highly-paid, highly-educated City workers, which was why the heckling was of such a high standard. I think someone was once heckled off in Latin and looked a bit surprised.

JOHN: What was your job at that point?

BRES: (LAUGHS) I was a Lloyds underwriter, working in the City.

JOHN: So basically it was up-market scum causing the problems.

BRES: Exactly. (LAUGHS) But I am from humble beginnings. I guess the Tunnel club had a timely demise and we were then a bit bereft of anywhere to go. We tried out Jongleurs club in Clapham, but the comedy was never great there and we weren’t allowed to heckle. We were physically told-off by bouncers. Luckily, Malcolm then set-up Up The Creek in Greenwich, which didn’t have the same notoriety as the Tunnel.

JOHN: I think the brothers who co-owned it with Malcolm told him after a few weeks that he couldn’t allow heckling and throwing things. Though I do remember some open spot act who got up on stage and started reading poetry. He was a bald man and you could see the blood trickling down his forehead after something was thrown and hit him.

BRES: I was there when Eddie Shit was performing. He came on dressed as Freddie Mercury and was singing songs by Queen with all the lyrics changed to refer to shit. I was sitting down the front and we were getting things passed to us from the back – including glass ashtrays – to throw at him. Which, obviously, we never did.

There was one occasion when an act which really was shit had been using a real frozen chicken and they ended up throwing this frozen chicken at the audience. The audience kept it then, slowly but surely, it made its way down the front. It came to me and I remember getting up on stage and offering it to Malcolm and I think I started up the chant “Shag the chicken! Shag the chicken!” which the whole audience took up.

So Malcolm got his knob out and duly obliged.

That was quite amusing.

JOHN: Did you make friends with the other hecklers?

BRES: Yes. And some of the acts as well. It wasn’t all animosity. Simon Munnery, Martin Soan, Boothby Graffoe, Rich Hall. We would leave the good acts alone and they would leave us alone.

JOHN: Mostly, I thought the hecklers at Malcolm’s clubs were firm but fair.

JOHN: Part of the training process for new comedians. You don’t get much heckling nowadays.

BRES: The demise of heckling is down to the extra tolerance we have nowadays, even for bad acts. There are hidden boundaries these days. There’s too much respect for comics these days. Performers don’t know how to give a riposte and, as a heckler, you don’t want to show them up. It would just stump them.

JOHN: Isn’t that the point?

BRES: Not always. The next generation should learn what “Maaallcolm!!!” means.