In my opinion, this blog may meander around a bit in its subjects, but one uniting factor is a little bit of quirky detail. And yesterday had some quirkiness woven into it.

I had bumped into Nick Awde the day before.

He is a writer and critic for entertainment industry weekly The Stage, has published books under his Desert Hearts imprint by comedy people Phil Kay and Bob Slayer and he himself co-wrote Pete and Dud: Come Again (about Peter Cook and Dudley Moore) and, solo, wrote Jimmy Savile: The Punch and Judy Show which (as a title) Ellis & Rose infamously performed at the Edinburgh Fringe – though, it has to be said, mostly without much reference to the original script.

Anyway, Nick Awde invited me to go and see the world premiere aka a rehearsed reading of Midnight at the St James’s Theatre yesterday. He told me it was a very serious Azerbaijani play about the Stalinist Terror.

In the last couple of weeks, I have seen the West End musicals Showstoppers! and Bend It Like Beckham – both bright, jolly, uplifting, toe-tapping feasts of singing and dancing and primary colours – so I cannot honesty say that an Azerbaijani play about the Great Terror seemed wildly appetising. Well, it would not be an attractive proposition at any time but – Hey! – I thought – It might be interesting or eccentric or both. 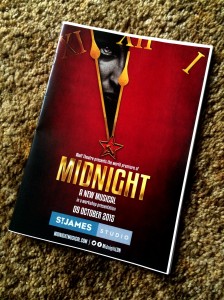 So I went yesterday afternoon and realised I must not have been paying full attention to Nick when he described it to me, because it was a MUSICAL about the Great Terror written by Elchin Ilyas oglu Afandiyev, who has been Deputy Prime Minister of Azerbaijan since 1993.

And it was not eccentric. It was wonderful. It was a serious and very dark musical about The Great Terror which I thought owed a little bit to J.B.Priestley’s An Inspector Calls. Although, I should point out, I have never actually seen An Inspector Calls.

Well, I possibly may have seen it years ago on the London stage but, as is well documented, I have a shit memory – I can’t remember the plot but have a vague memory of a two-storey stage set.

Midnight did not have a two-storey stage set.

Anyway, Nick Awde’s involvement in Midnight is as artistic director of the Aloff Theatre company which staged the play/musical and which is “dedicated to the promotion of new and classic works from East Europe and Central Asia” and which is “currently focusing on the interchange of dramatic resources between Azerbaijan and the UK”.

So Nick Awde, in my eyes, should be described as – and, indeed, is – an Englishman raised in Africa living in France with a Georgian passport involved in an Azerbaijani theatre company who wrote about Jimmy Savile as a Punch & Judy show.

I think that qualifies as quirky.

Retreating through a not-totally-devasted France, they had been taking shelter in abandoned farmhouses, most of which retained their wine cellars. His relative could remember little about the evacuation from Dunkirk except being carried onto a boat.

I then had to rush to see Jody Kamali’s excellent Spectacular! show at the Museum of Comedy (I had already seen it at the Edinburgh Fringe in August). Afterwards, he told me about someone he knew who had a dispute with Rowan Atkinson at a press conference at the Fringe in 1971. As a result, his friend’s show was sold out despite (or perhaps because of) the fact that Rowan (very popular on the Fringe at the time) allegedly stood outside the venue every day screaming to the public NOT to go in and see the show.

Anyway, eventually, in the early hours of this morning, I got home to an e-mail from this blog’s South Coast correspondent Sandra Smith (who seems to be spending less and less time on the South Coast).

I went to the Camden’s People’s Theatre in London this evening to see Lou aka LoUis CYfer, from the Admiral Duncan pub, Soho.

She got a Guardian review and is booked for Glastonbury and the Edinburgh Fringe next year. I really enjoyed her one woman show Joan.

She wove her late grandmother, Catherine, into the piece, complete with reserved empty chair. It was beautifully done.

I got to play a cannon instead of a horse and gave it my all.

My efforts were clearly not appreciated because the audience all laughed.

As is often the case in this blog, I have no explanation and it seems wiser not to ask.