Fear of flying for cult comedian Charlie Chuck?… Only ducks and pianos fly… 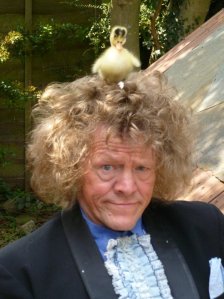 Charlie Chuck was feeling under the feather...

“Your mission, should you accept it” I said, “is to think up something for my blog tomorrow. I’m off out to get milk, eggs and baked beans.”

It was around midnight and Charlie Chuck was staying at my eternally-un-named friend’s flat behind Up The Creek comedy club in Greenwich, which was founded by comedy godfather Malcolm Hardee.

The club, not Greenwich.

So I left Charlie Chuck and my eternally-un-named friend with my hand-held tape recorder, embarrassingly like the one occasionally used in I’m Alan Partridge.

When I got back from the Sainsbury all-night supermarket, I listened to what was on the tape recorder:

“Malcolm Hardee,” Charlie Chuck was saying, “used to book me to go over to play the Laughter Lounge in Dublin. I used to go over in the ferry with him. He used to come back by plane; I used to catch a boat. I wouldn’t get on a plane.”

“Have you never flown?” my eternally-un-named friend asked, slightly surprised.

“You only went over to Canada to see Notre Dame Cathedral?” asked my eternally-un-named friend.

“No, to perform in a stage show,” he replied.

“If it hadn’t been for John,” said Charlie Chuck, “I wouldn’t have gone. He went to the airport with me. It were a big thing for me to fly. There were quite a bit of money involved – around £20,000 – and, if I hadn’t gone, they would’ve sued me. They wanted me out there for six months, but I were only there for three weeks.

“They offered to pay me to go to Canada on the QE2 liner; it would’ve cost ‘em £3,500. It would’ve taken about three weeks, but I looked up about the QE2 and it were in a hurricane once with 90 foot high waves and I thought I don’t want three weeks of this. So I flew out but I were terrified.

“On the plane going out there, people recognised me and they were saying Tell us a joke, but I were nearly crappin’ meself.

“I were out there to play the part of Jean Lapointe, a Canadian senator, eighty years old, who had done the Ed Sullivan Show and about 30 films. The routine I did were his routine when he were a younger man.

“The tour people told me that, on the show, I’d be on wires and I ‘d probably be 10 or 20 feet above the stage. But it ended up I was playin’ this piano that were lifted 30 feet high in the air and upside down. I were strapped to it. I were playin’ Moonlight Sonata and In The Mood and talking to the piano. It were a routine I did. I climbed across the piano but kept the arpeggio going. I sneezed and the sheet music went three-quarters of the way across the piano. It were a bit like an Andrew Lloyd Webber production.

“It were for Franco Dragone. He’s big. He does Cirque du Soleil and Las Vegas and makes elephants disappear like David Copperfield. He books acts from all over the world. It were a big thing.

“It were going to be filmed and be on national television in Canada. But, when the piano were upside down, there were technical problems,. It banged into me leg and nearly broke me ankle. It bruised all me leg and they had to take it away to sort it out and they called the whole routine off. I’d rehearsed for a week but they didn’t do it. It were too risky.

“Because they knew I played drums, they brought in a brand new £2,000 drum kit for me to wreck, because that’s what I do in me show. I talk to me drums and wreck the kit and bite me hands and all that. I used to do a forward somersault off me drums when I were younger.

“They’d have to get me a lot of money to get me on a plane again.”

“Why?” my un-named friend asked.

“I just think of Jim Reeves,” said Charlie Chuck. “He died in a plane crash. Otis Redding. Buddy Holly. They all went down in plane crashes.

“He’s gone to buy some milk,” my eternally-un-named friend said.