This week, in issue 67, there are items on the Mexican rodeo tradition, US abortion laws, personal advice from the founding executive editor of Wired magazine, unforgettable movie trailers and a suspected Basque Country serial killer of gay men who is still on the loose…

We had a chat backstage when I went to the grand re-opening of South London’s unique comedy venue The Poodle Club. David was headlining the opening night, of course. 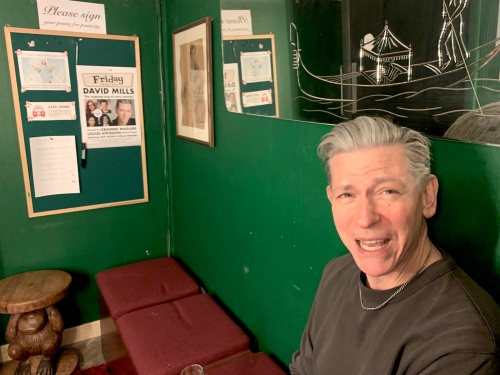 JOHN: How would you describe Quality Time?

DAVID: It’s a column, really. It’s a window onto the world. Culture & commentary.

DAVID: No, it’s where the family ended-up in the 1980s and 1990s. I was born in New Jersey, grew up in Pennsylvania and we travelled over to California when I was about 18. My family’s now in Northern California and Oregan.

JOHN: Recently, you’ve started performing in the UK AND in the US. Are the audience tastes different?

DAVID: Yes. What I’ve found, going back to LA and gigging is that a lot of comics out there are really great on stage and they’re really warm and they have tons of charisma, but they have none of the craft that you need to play comedy rooms in the UK.

JOHN: So what do you need in the UK?

DAVID: You need jokes. You need callbacks. It needs to be quick fire. You need to keep them laughing. In the US – at least in California – I think it’s very different in New York – they are happy to just have a charming host. Someone like a party host and maybe a joke comes and maybe it doesn’t.

David at the Underbelly’s Thames-side South Bank Festival in London, 2019

When you get UK acts like me or Brett Goldstein who go over there and… joke, joke, joke, joke… they don’t know what they’re even looking at but they LOVE it.

I was over there for two months at the end of last year and the beginning of this and I thought: There’s lots of opportunity here for UK acts and for me. And they’re also looking at me because I’m American but I’m not American. So I’m sort-of this interesting thing to them.

JOHN: And yet you are one of them…

DAVID: Yes. I AM ‘one of them’. It’s good to go back. It’s nice to be around. It’s always nice to come home, isn’t it? Look at James Cordon. He’s coming home to the UK.

JOHN: Indeed. So that means there’s an empty space for a late night chat show host in the US. Perhaps a culturally-diverse person like you? They’ve had James Cordon and Craig Ferguson and Trevor Noah – all non-Americans. You are an American but, in a way you are not an American. So you…

DAVID: No. What they want is a woman. And there should be a woman. There is no woman on the late-night chat shows. Well, Joan Rivers did it. Samantha Bee does it. Others have done it, but they’ve never lasted.

What’s interesting is that James Cordon is going AND Ellen DeGeneres  is going. Ellen is daytime and Cordon is evening. Ellen’s been doing it for 19 years. Cordon was tipped to replace Ellen but it seems he’s coming back to the UK.

JOHN: So they have two spots open and they want someone sophisticated who…

Multi-cultural David at the Bar Chez Georges, Saint-Germain in Paris, 2020

They don’t need to be joke-joke-joke good comics. They do need to be charming and dynamite and look great and be friendly and likeable. And then they get picked up from that and thrown into something like an Ellen spot.

JOHN: But you’re an actor too. You were in Florence Foster Jenkins with Meryl Streep and Hugh Grant. When are you going to be in another feature film?

DAVID: Well, there’s a small film I did – a small part – which I filmed last July in Glasgow.

JOHN: And Glasgow is Gotham City?

DAVID: Yes. Glasgow is New York. Whenever they want to do New York in the UK, they do it in Glasgow.