Last night, the highly-esteemed Sohemian Society held a celebration of British radio comedy, featuring producers John Lloyd (The News Quiz, Spitting Image, Have I Got News For You, Q.I.), Edward Taylor (Does The Team Think, The Navy Lark, The Men From The Ministry) and Richard Edis (Brain of Britain, My Music).

They had many interesting anecdotes about the production of comedy programmes, which I won’t steal from them, but one presumably widely-known story which I myself had never heard was told by performer Jon Glover about John Reith, the dour, Scottish, first Director General of the BBC. 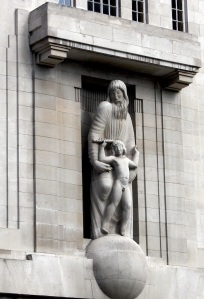 “Lord Reith wasn’t that keen on comedy, but there was a sort of anarchy going on in the building of Broadcasting House in that, if you look at the facade of old Broadcasting House you’ll see some Eric Gill sculptures on the front.

“Eric Gill not only slept with his children but sculpted directly onto the Portland stone outside Broadcasting House in mid-winter, wearing a smock and no knickers and BBC secretaries were commanded not to look up as they went into the building.

“And he did a very famous statue of Prospero and Ariel and he gave Ariel an extremely large ‘protuberance’ and Lord Reith is reported to have one night tried to climb the scaffolding and chip away at it.”

I find the story almost impossible to believe – the vision of John Reith climbing up his own scaffolding to chip away at a work of art he presumably commissioned. But it is a good story – and bizarrely satisfyingly neat in the idea (given recent stories) that a paedophile carved above the main entrance to the BBC’s headquarters a man holding the naked figure of a child.